317
Studies of the Effect of Varying Prop-1-Ene-1,3-Sultone (PES) Concentration on Li-Ion Batteries

Electrolyte additives are the most effective way to improve the calendar life and cycling performance of lithium-ion batteries. Vinylene carbonate (VC) is perhaps the most well-known additive for Li-ion batteries and has been shown to be useful during the solid electrolyte interphase (SEI) formation [1], which can result in longer calendar life and reduced irreversible capacity (IRC). However, it has been shown that the performance of cells containing VC decreases at high temperatures and high voltages.  Sulfur-containing additives have been studied in hopes to overcome the temperature sensitivity of VC. Prop-1-ene-1,3-sultone (PES) was found to have smaller IRC than VC-containing cells and was suggested to be an SEI forming additive [2]. In this study, we show that PES is a useful additive for Li-ion pouch cells and suggest that PES, when used in combination with other additives, may be more effective than VC at achieving long lifetimes and high cycling performance.

Figure 1 shows a preliminary set of results from both storage and cycling experiments of PES-containing cells compared with control electrolyte and 2% VC-containing cells. The dotted line in Figures 1a, d, and e indicates the value for 2% VC. Figure 1a shows the gas evolution during formation at 40°C and Figures 1b and c show gas evolution during storage at 60°C and 40°C, respectively. Cells containing 2, 4 and 6% PES show smaller gas during formation than that of 2% VC and all concentrations of PES studied show significantly smaller gas during 40°C and 60°C storage than VC-containing cells. The most prominent advantage of PES compared to VC is the extremely low gas evolution during high temperature storage. Figure 1d shows the voltage drop during storage from 4.2 V at 40°C for 500 hours. Figure 1e shows the average coloumbic inefficiency (CIE) during the last three cycles of cycling between 2.8 V and 4.2 V at C/20 and 40°C. Through the voltage drop and CIE, it is clear that 2% PES appears to be as good as 2% VC.

This work suggests that PES is a viable alternative to VC and is superior during high temperature storage. PES may also prove to be beneficial in combination with other additives. 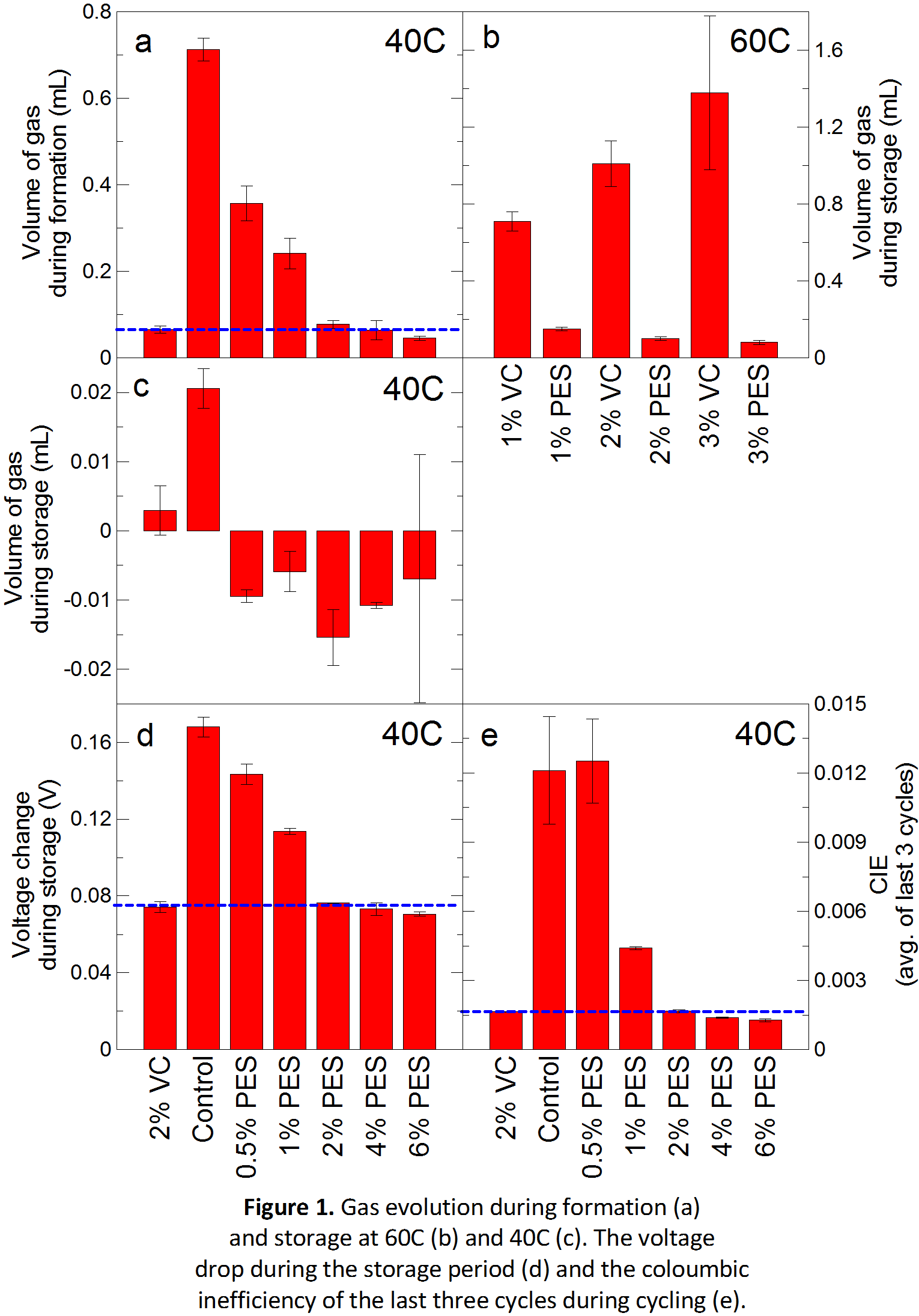