Expo Center, 1st Floor, Universal 21 & 22 (Moon Palace Resort)
S. Yagi (Nanoscience and Nanotechnology Research Center, Osaka Prefecture University), T. Ichitsubo, and E. Matsubara (Department of Materials Science and Engineering, Kyoto University)
Metallic nanomaterials are necessary for modern science and technology, and many kinds of metallic nanomaterials have been put into general use.  Noble metal nanomaterials have high catalytic activities and are used as catalysts for fuel cells and toxic gas decomposition.  They are also used for metallic inks, color tuning, and in sensors.  However, noble metals are expensive, and the substitution of noble metals with affordable less-noble metals is intensively investigated.  Less-noble metals include iron-group metals (Fe, Co, and Ni) with ferromagnetism as elemental substances and alloys, which can be used for magnetic drug delivery system and magnetic fluid.  Because less-noble metals are more easily oxidized than noble metals, it is necessary to handle nanomaterials of less-noble metals with care in inactive atmosphere.

In the present work, an electrochemical approach to the liquid-phase synthesis (electroless deposition) of magnetic nanomaterials is shown mainly in the context of thermodynamics.  The details of thermodynamic calculations for nanomaterials synthesis in aqueous solutions have previously reported by the authors.1  Metallic nanomaterials are often synthesized in organic solvents with higher electrochemical stability than that of water because strong reducing agents are required to reduce less-noble metallic ions.  However, the thermodynamic data for organic solvents are not well consolidated, confining the thermodynamic calculation of the redox potential and solubility.  Even in this case, thermodynamic consideration is possible by measuring the redox potential of a metal/metallic ion redox couple.  For example, Fig. 1 shows cyclic voltammograms measured in ethylene glycol (EG) containing 0.050 M CoCl2·6H2O and 1.0 M NaOH.2,3  The dotted line indicates a normal cyclic voltammogram measured by a potentiostat, while the solid line represents a cyclic voltammogram calculated from the change in the resonance frequency of a quartz crystal working electrode on the assumption of a 100% current efficiency for Co deposition/dissolution.  In the normal cyclic voltammogram (dotted line), a large cathodic current density was observed below -0.9 V vs. Ag/AgCl because of the cathodic decomposition of EG, which hinders observation of an accurate cathodic current for Co deposition.  In contrast, the calculated voltammogram (solid line) contains the information on the redox reactions with weight change, i.e., the deposition and dissolution of Co.  From the calculated voltammogram, the redox potential of the Co/Co(II) redox couple was found to be about -0.77 V vs. Ag/AgCl, below which metallic Co can be deposited.  This very low potential can be attained by the addition of a strong reducing agent, such as hydrazine (N2H4).  Fig. 2a shows Co particles 1.3 mm in mean diameter synthesized in an EG solution containing 0.050 M CoCl2, 0.2 M NaCl, and 0.50 M N2H4·H2O.  Furthermore, Co nanoparticles 97 nm in mean diameter were synthesized with the addition of 0.10 mM hexachloroplatinic acid hexahydrate H2PtCl6·6H2O as a nucleating agent (Fig. 2b).  As shown in the schematic diagram in Fig. 2d, the addition of a nucleating agent provides many nuclei during the nucleation stage and the amount of Co deposited on each nucleus is thereby decreased, resulting in the formation of smaller particles.  Conversely, a smaller number of nuclei leads to the formation of larger particles.  Thus, the particle size can be controlled by the addition of a nucleating agent.  Moreover, synthesis under a static magnetic field resulted in the formation of Co nanowires 97 nm in mean diameter due to the magnetic shape anisotropy (Fig. 2c).4  In addition to Co, the authors have obtained nanoparticles and nanowires of Ni, Fe, and their alloy by similar methods.5,6

The measured redox potential of a metal/metallic ion redox couple is a thermodynamic value and does not contain kinetic information; however, the synthesis conditions of metallic nanomaterials can be easily determined by comparing the immersion potential (mixed potential) in the reaction solution with the redox potential of a metal/metallic ion redox couple.  Although further additives such as nucleating agent, dispersing agent, and complexing agent are necessary for the formation of metallic nanomaterials, it is possible to reduce the time required for the optimization of such synthesis processes using thermodynamic information. 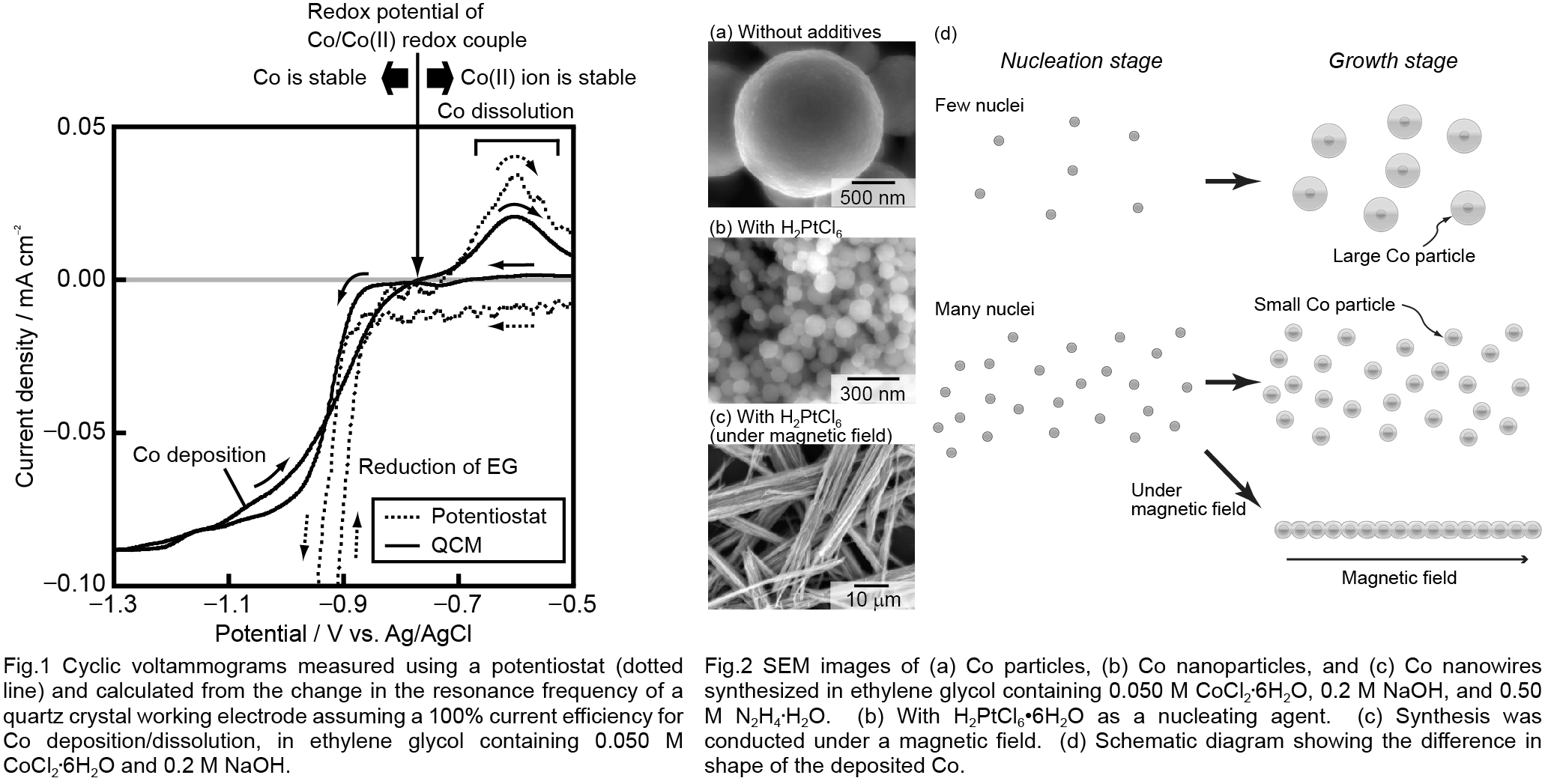