Expo Center, 1st Floor, Center and Right Foyers (Moon Palace Resort)
Y. Watanabe (Department of Materials Science, Tohoku University), I. Muto (Department of Materials Science, Tohoku University), T. Ohmura (Nippon Steel&Sumitomo Metal Corporation), N. Hara, and Y. Sugawara (Department of Materials Science, Tohoku University)
High strength carbon steels are anticipated to be used in various fields. However, hydrogen embrittlement is always a big problem for high strength steels.As a result of several treatments to strengthen steel Ti(C,N) inclusions form. Although lots of reports have been conducted to in-steel inclusions such as MnS, little is known about Ti(C,N). Therefore the objective of this study is to look in to the microelectrochemial properties of Ti(C,N) inclusions and its effect on hydrogen embrittlement.

Titanium added carbon steel(0.24%C, 1.09%Mn, 0.003%S, 0.03%Ni, 0.16%Cr, 0.028% Ti, 0.031% N) was used as a specimen. The specimen was heat–treated at 1163K for 45minutes and then water-quenched. After that the specimen was kept at 493K for 1hr, and tempered. The specimen was mechanically polished with 1mm diamond paste. Electrochemical measurements were performed in a mixture of 50mM CH3COOH-50mM CH3COONa under naturally aerated conditions. The concentration of the solution above was adjusted to achieve maximum electrical conductivity, and its pH was 4.64.

Macroscopic polarizations were conducted to determine the macroscopic corrosion behavior of the specimen. Under weak acid conditions the specimen showed an active dissolution as soon as it was anodically polarized. On the other hand, cathodic polarizations showed the potential at which hydrogen started to form. (Fig. 1) This potential is important for determining the effect of Ti(C,N) on hydrogen embrittlement.

Microscopic polarizations were conducted to elucidate the electrochemical behavior of Ti(C,N) inclusions. Fig. 2 shows the cathodic polarizations curves of areas around Ti(C,N) inclusions and matrix areas that do not have inclusions in the target area.  By comparing the open circuit potentials of the two curves we can see that areas around Ti(C,N) shows a high open circuit potential. By taking into account the potential-pH diagram of Ti(C,N) (Fig. 3) we can confirm that Ti(C,N) inclusions show a stable region in a noble region. Since Ti(C,N)  are stable in a high potential, Ti(C,N) are likely to act as preferential cathodic reaction site. 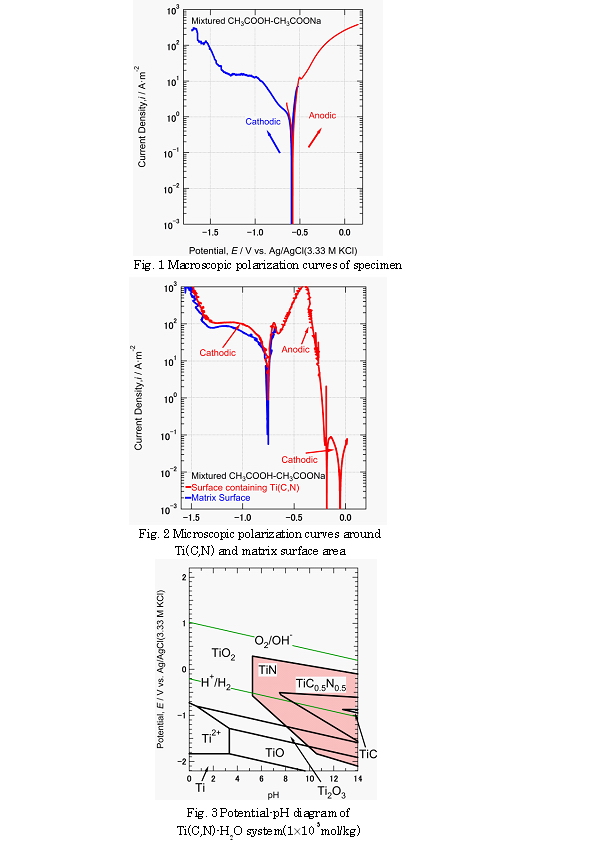