Sunrise, 2nd Floor, Star Ballroom 4 & 5 (Moon Palace Resort)
C. C. Lin, Y. Kuo (Texas A&M University), and X. Zhang (Xi’an Jiaotong University)
Solid state white light emitting devices (LEDs) are needed for the lighting and many other applications [1]. The  semiconductor based LED can only emit the narrow band light due to the band gap energy restriction. The white light has to be generated by combining 3 different types of LEDs or using a LED and a phosphor material [2,3]. The single-chip white-light LED is desirable. Kuo and Lin reported a new type solid state LED that emits white light from an amorphous metal oxide film [4-7]. Light is emitted from conductive paths self-aligned to the gate electrode after the dielectric breakdown [4-7]. The TiOx thin film, which has a near zero band offset with Si, has been used as the gate dielectric in DRAMs [8,9]. It may be a good light emission material in the new type of LED. Authors investigated the TiOxbased LED for the electrical and optical properties.

The new LED was made of the MOS capacitor on the p-type (100) Si wafer. The TiOx layer was sputter deposited from the Ti target at 5 mTorr, 60 W, and Ar/O2 (1:1) atmosphere for 2 minutes. The post deposition annealing (PDA) was done in the N2 atmosphere at 1,000°C for 3 min. The 80 nm ITO layer was sputter deposited on the sample and wet etched into the 300 µm diameter electrodes. The final post metal annealing (PMA) was done at 400°C for 5 min under the H2/N2(1:9) atmosphere. The current-voltage curves were measured with the Agilent 4155C semiconductor parameter analyzer. The light emission spectra were recorded by the optical emission spectrometer (StellarNet BLK-C-SR-TEC).

Figure 1 shows the high-magnification photos of the LED stressed at Vg = -10V, -15V, -20V, and -25V, separately. The light is emitted from many discrete bright dots each of which is from the thermal excitation of a conductive path in the TiOx layer. The uniform light emission from the conventional semiconductor based LED is due to the recombination of the e-h pair or excitons. Both the light intensity and the number of bright dots in this LED increased with the increase of the magnitude of Vg (|Vg|). Figure 2 shows the current density-voltage (J-V) curve of a LED. The inset shows the enlarged view. The J jumped abruptly at the breakdown voltage (VBD) of -5.9V above which the light emission was observed. Then, the leakage current increased monotonically with the increase of the |Vg| similar to the resistor behavior. The light emission mechanism of this device is the same as that of the incandescent light bulb, i.e., thermal excitation of the conductive filament from the passing of a large current.

Figure 3 shows the emission spectra of the same LED at Vg = -10V, -15V, -20V, and -25V, separately. The same broad band light is emitted at different Vg’s. The light intensity increases with the increase of the |Vg|, which is consistent with the Figs. 1 and 2 results. The device has a CIE 1931 color coordinate of (0.462, 0.426), which is located at the warm white light region. It has a CCT of 2,788K and a CRI Raof 95, which are close to those of the W incandescent light and better than those of many fluorescent or semiconductor-based LED lights.

The new LED could be driven at various frequencies and duty cycles (DCs). The power consumption can be lowered with the reduction of the DC. Figure 4 shows the emission spectra of the LED driven from 1 Hz to 100 kHz but with the same DC of 75%. The light emission intensity, CIE color coordinates, CCT, and CRI remain the same, which is contributed by the fast excitation of the short conductive path, e.g., < 5 nm. This is desirable for many industry and biomedical applications. 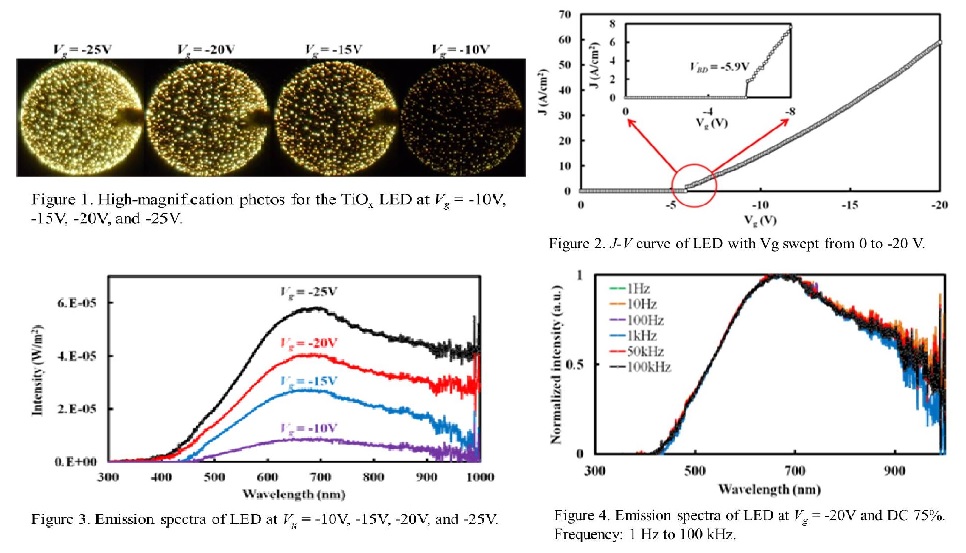