Metal-assisted chemical etching (MACE) is an attractive method as an alternative to the DRIE method owing to its low cost process and wafer-scale fabrication. The surface of Si is very smooth and clean because the MACE is a simple redox process of H2O2, HF, and Si with metal catalyst. However, most studies of the MACE have focused on the fabrication of Si nanowires (NWs) and their applications, so far. Figure 1a shows the scanning electron  microscopy (SEM) images of Si NWs fabricated from the Si substrate (p-type, 1-10 Ωcm). The Si NWs were etched using thin Au film (10-nm-thick) under the typical MACE condition with a mixture 4.8 M HF and 0.44M H2O2 at room temperature for 1 h. We found that 10-nm-thick Au film consisting of particle-linked structure produced vertically-aligned Si NWs with a length of about 23.8 μm.

Compared with the fabrication of Si NWs, it is still unclear to fabricate Si MWs with desired length and diameter using the MACE method. As a preliminary experiment to fabricate Si MWs, we prepared a continuous gold film with the thickness of 30 nm onto the lithography-patterned Si substrate with ordered photoresist dots as a etch mask. The morphology of the etched structures would usually be dependent on the morphology of the metal catalyst prepared on the Si substrate. However, Si MWs etching using 30-nm-thick gold film under the same conditions as the fabrication of Si NWs showed an over-etched features (Figure 1b), indicating that it is necessary to optimize the etching conditions for fabrication of long and vertical Si MWs.

In this report, we present a systematic study of the MACE process to fabricate Si MWs. Several models on efficient redox reactions of reactants with silicon though the metal catalyst were studied by controlling the MACE parameters such as the morphology of metal thin film and electrolyte (HF and H2O2) concentration. To obtain vertically aligned Si MWs, the deposition rate and thickness of Au film should be controlled as the critical parameters. We found that the appropriate deposition rate and thickness of Au film were 2-3 Å/s and 30-40 nm, respectively. As a result, by optimizing MACE conditions, we successfully fabricated high-quality Si MWs with lengths up to 17 μm as shown in Figure c and d. The minority carrier lifetime of these MWs, measured by the microwave photoconductive decay, is much higher than that of MWs etched by DRIE process. The MACE method of high-quality Si MWs would offer great opportunities to develop cost-effective and highly efficient solar cells. 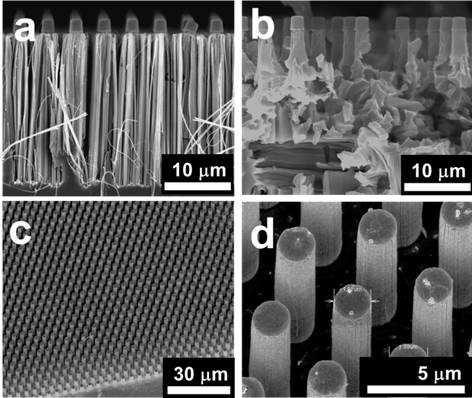