We pay attention to the microreactor (MR), which is one of a solution synthesis method and has advantages that the proper pH value and temperature can be maintained during the reaction. Before, we proposed the combinatorial MR and reported that it enables the automatic and precise program control of reaction conditions such as temperature, pH and mixture ratio of sources [3]. In the reaction parameters, pH value is one of the key parameters, since it affects the reaction rate and the formation of crystal nucleus. Depending on the pH value, numbers of emission centers were changed, too. In other words, the solution pH control means number of emission centers control. In our former MR system, a pH value has been measured at the precursor product. A structure of mixer element, at where solution sources meets and the reaction takes place, is also important.

In this study, to achieve more precise pH control, an in-situ pH monitoring of reacting solution has been attempted to use MR for YVO4: Bi, Eu nanophosphors preparation. A mixer glass cell has also been designed to realize the quick mixture of sources, which is MR system. In-situ pH monitor is not only the powerful tool for nanophosphors production process control but also every chemical production process.

YVO4: Bi, Eu nanophosphor samples were synthesized by hybrid use of MR system and solvothermal method. The precursor was prepared by citric-acid-gel method using the MR system. The system consists of liquid sources, syringe pumps, a mixer cell, a mixing/reaction tube, and an auto-sampler. The mixer cell having a 1-mm-width Y-branch channel was fabricated by sandblast method with glass substrates. A pH sensor was placed at the outlet of the mixer cell.

The acid solution (pH=5) sources and the basic solution (pH=12) sources were prepared Y(CH3COO)3°E4H2O, Eu(CH3COO)3°E4H2O, C6H5Na3O7°E2H2O, Bi(NO3)3°E5H2O, C2H6O2, H2O and Na3VO4, NaOH, H2O, respectively. These two sources were mixed at Y-branch and passed through a Teflon tube (1000μm diameter) in an ultrasonic bath maintained at 85 ºC. The in-situ pH monitor was performed during the synthesis. The monitored pH level was about 8.5. The complex ions were formed several types coordinate depend on pH levels in general. Due to the small reaction channels, the pH levels are precisely monitoring during the reaction, that is in-situ pH monitored in MR.

The obtained precursor was carried out solvothermal process at 130 ºC for 6 h in the autoclave. After quenching to a room temperature, nanophosphor particles were collected by centrifugation.

The spherical crystal grains of the YVO4: Bi, Eu nanophosphor sample were observed about 50 nm, which consists of smaller crystallites of about 10 nm in diameter. The observed XRD patterns of YVO4 are identified as those due to the tetragonal zircon structure of YVO4. According to the PL and PLE spectra, sharp emission peaks are found in the spectral range from 580 nm to 720 nm, and all peaks are attributed to the 4f6-4f6 electron transition of the Eu3+ centers.  The broad PLE band is thought to be due to YVO4 host (250 - 300 nm) and charge transfer state of Bi3+ centers (300 - 400 nm) [4]. It is particularly worth noting of MR synthesis that the Bi3+center spectrum becomes higher than the previous reports. The internal quantum efficiency is 28 % at an excitation wavelength of 365 nm. It should be noted that the reproducibility of MR synthesis is entirely improved by employing the in-situ pH monitoring. 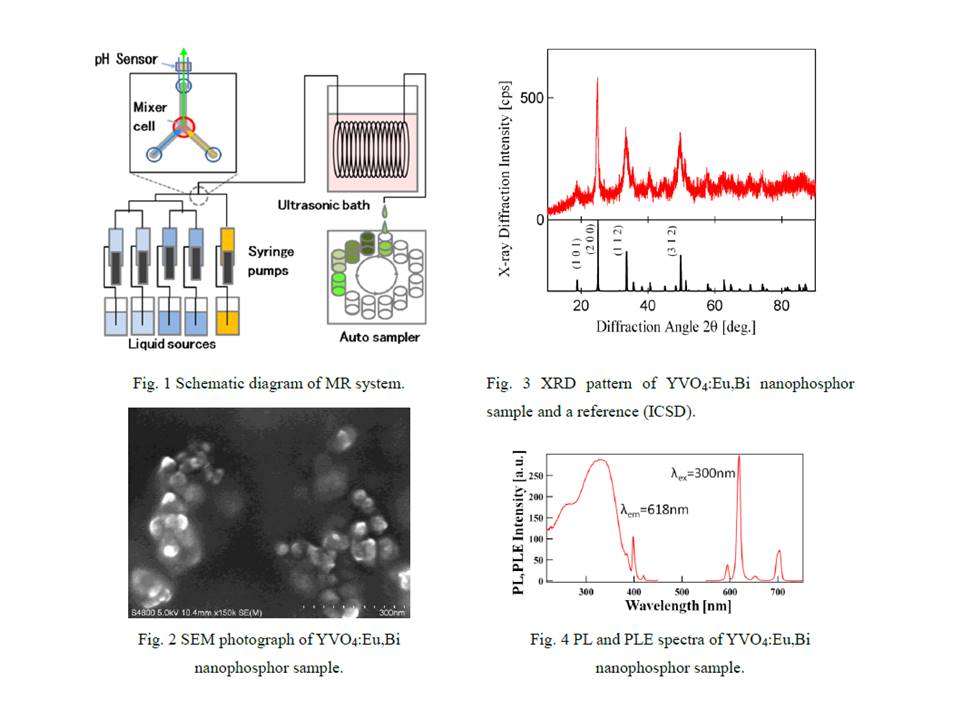