The persistent organic pollutants are a growing problem of pollution. Recently, the electrochemical oxidation processes have been employed to degrade organic matter contained in water. DSA electrodes are used for oxidizing organics via oxidants electro generated on their surface, such as the hydroxyl radical (•OH) which mineralize persistent organic pollutants1. The production of •OH on DSA is performed for the no active electrode route avoiding oxygen evolution reaction. It is expected that the mixed metal oxide electrode of IrO2-SnO2-Sb3O5 favor the formation of (•OH) through the water oxidation, although the formation of this radical is uncertain2.

In this work the synthesis of IrO2-SnO2-Sb3O5 electrode is made by Pechini method. On the other hand, the detection of •OH radicals, formed during the oxidation of water, is followed by the addition reaction between •OH radical and p-nitrosoaniline (RNO) compound. The above reaction produces a stable radical (spin trap) and the detection of •OH is determined by the bleaching of the RNO3.

A pretreatment of the titanium substrate is performed by applying concentrated reagent grade HCl and oxalic acid. Then, an inter-layer of titanium oxides and tantalum oxides is supported on the substrate. Afterwards, the IrO2-SnO2-Sb3O5 coating was prepared using the method Pechini2. Hydroxyl radicals are generated on IrO2-SnO2-Sb3O5 at current densities of 10, 15 and 20 mA cm-2, and these are detected in situ by the discoloration of the RNO on a UV–visible method at wavelength of 440 nm.

Figure 1 shows the depletion of the absorbance of RNO with time at a wavelength range of 350-550 nm, during the electrolysis of water at 10 mA cm-2. The bleaching of RNO put on evidence that hydroxyl radicals are produced on IrO2-SnO2-Sb3O5 owing to the reaction between RNO and MOx(•OH). Electrolysis performed at 15 mA cm-2 (not shown herein) showed similar results to that obtained at 10 mA cm-2; while at 20 mA cm-2 (not shown herein) the bleaching was incomplete suggesting the apparition of oxygen evolution reaction.

Hydroxyl radical formation via water discharge on the IrO2-SnO2-Sb3O5 electrode was achieved at 10 ≤ J ≤ 15 mA cm-2. The detection of MOx(•OH) was followed by means of the addition reaction between MOx(•OH) and the RNO which produced a stable radical. The generation of MOx(•OH) radicals on the electrode IrO2-SnO2-Sb3O5 can be implemented in the degradation of recalcitrant organic compounds contained in industrial wastewater. This later should serve as a starting point for future research. 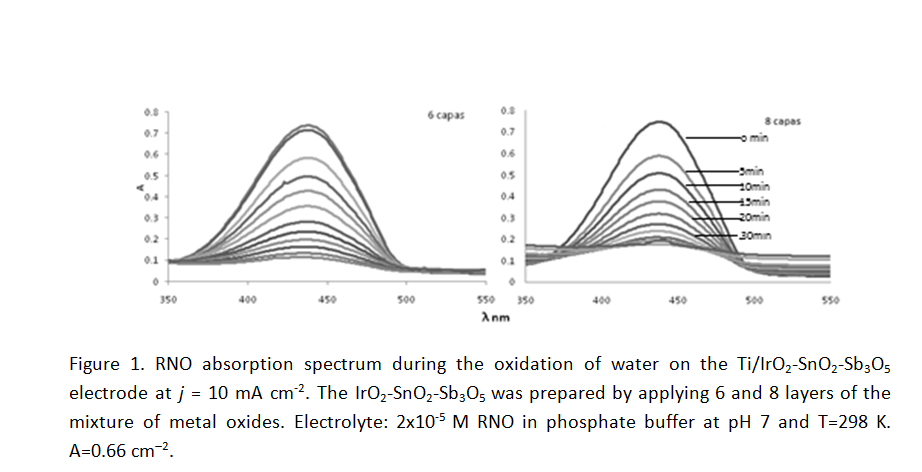