Sunrise, 2nd Floor, Galactic Ballroom 1 (Moon Palace Resort)
S. Yagi, M. Fukuda (Nanoscience and Nanotechnology Research Center, Osaka Prefecture University), T. Ichitsubo, and E. Matsubara (Department of Materials Science and Engineering, Kyoto University)
Prussian Blue (PB) and Prussian Blue analogues (PBAs) have been extensively studied as electrochromic materials, electrocatalytic materials, and positive electrode active materials for rechargeable batteries since Neff first reported the electrochemical redox behavior of a PB-modified electrode with a rapid color change.1  Fig. 1a shows the structure of a PBA AxMy[M’(CN)6]·nH2O.  In this structure, transition metal cations M and M’ are coordinated with CN bonds to form a three-dimensional framework structure in which ions and water are accommodated.  Ions are inserted/extracted with the redox reactions of the transition metal cations M and/or M’ for charge compensation.  The framework structures of PB and PBAs are favorable specifically for the fast insertion and extraction of polyvalent cations, which have higher electrostatic interaction than monovalent cations.

In the present work, we investigated the redox behavior of a PB thin film in electrolytes containing an Mg salt to investigate the possibility of using PB as a positive electrode for Mg batteries.  Scanning electron microscopy (SEM) and optical images of the electrodeposited PB film are shown in Fig. 1b.  The PB film had a bright blue color and cracks on its surface, and did not contain Na, K, or Cl elements, as confirmed by energy dispersive X-ray spectroscopy.  Crack-less film was obtained by using KCl instead of NaCl as the supporting electrolyte.  Fig. 2 shows the cyclic voltammogram (below) and corresponding weight change (above) measured by EQCM (electrochemical quartz crystal microbalance) in an aqueous solution containing 1.00 M MgSO4•7H2O.  Large cathodic current was observed below 0.4 V vs. SHE during the cathodic sweep, and two small anodic peaks were observed at about 0.3 and 0.5 V.  The weight of the PB film increased during the cathodic reaction and decreased during the anodic reaction, suggesting insertion and extraction of Mg2+ ions for the charge compensation of the PB film.  However, there was a large deviation between the measured weight change and the weight change calculated from the current density assuming the insertion and extraction of completely desolvated Mg2+ ions.  The measured weight change was significantly larger than the calculated weight change, indicating that Mg2+ ions were solvated (hydrated) with water molecules.  The measured and calculated weight changes were comparable by assuming that the hydration number was 12 during the insertion of Mg2+ ions and 17 during the extraction of Mg2+ ions (at the 2nd cycle).  It should be noted that the hydrated radius and hydration number of the Mg2+ ion is reported to be 0.300–0.428 nm and 7–36, respectively;2 the hydrated diameter of the Mg2+ ion is larger than the distance of the closest approach between Fe ions in the PB framework (0.507 nm).  Therefore, it is possible that Mg2+ ions drag water molecules into/from the framework of PB, although hydrated Mg2+ ions should be transiently or partly dehydrated for the insertion and extraction.  There is also a possibility that H+ ions are inserted and extracted.  However, because no redox peaks of the PB film electrodeposited under the same conditions were observed in 1.00 M LiCl aqueous solution,3 this possibility can be discarded.  This result also indicates that the insertion and extraction of hydrated Li+ ions did not occur even though hydrated Mg2+ ions were inserted and extracted as shown in Fig. 2.  Generally, the hydration energies of polyvalent cations like Mg2+ ion are larger than those of monovalent cations, and the hydrated radius of the Li+ ion is smaller than that of the Mg2+ ion; the hydrated Li+ ions seem to be more easily inserted/extracted than hydrated Mg2+ ions.  This apparent antinomy leads to the hypothesis that the primary (the innermost) hydration shell is not detached from either ion, and the size of the primary hydration shell of Mg2+ is smaller than that of Li+ because of the higher hydration energy of Mg2+.  This point is now under intensive investigation.

In the presentation, the electrochemical insertion/extraction behavior of other combinations of framework structures and electrolytes will also be presented. 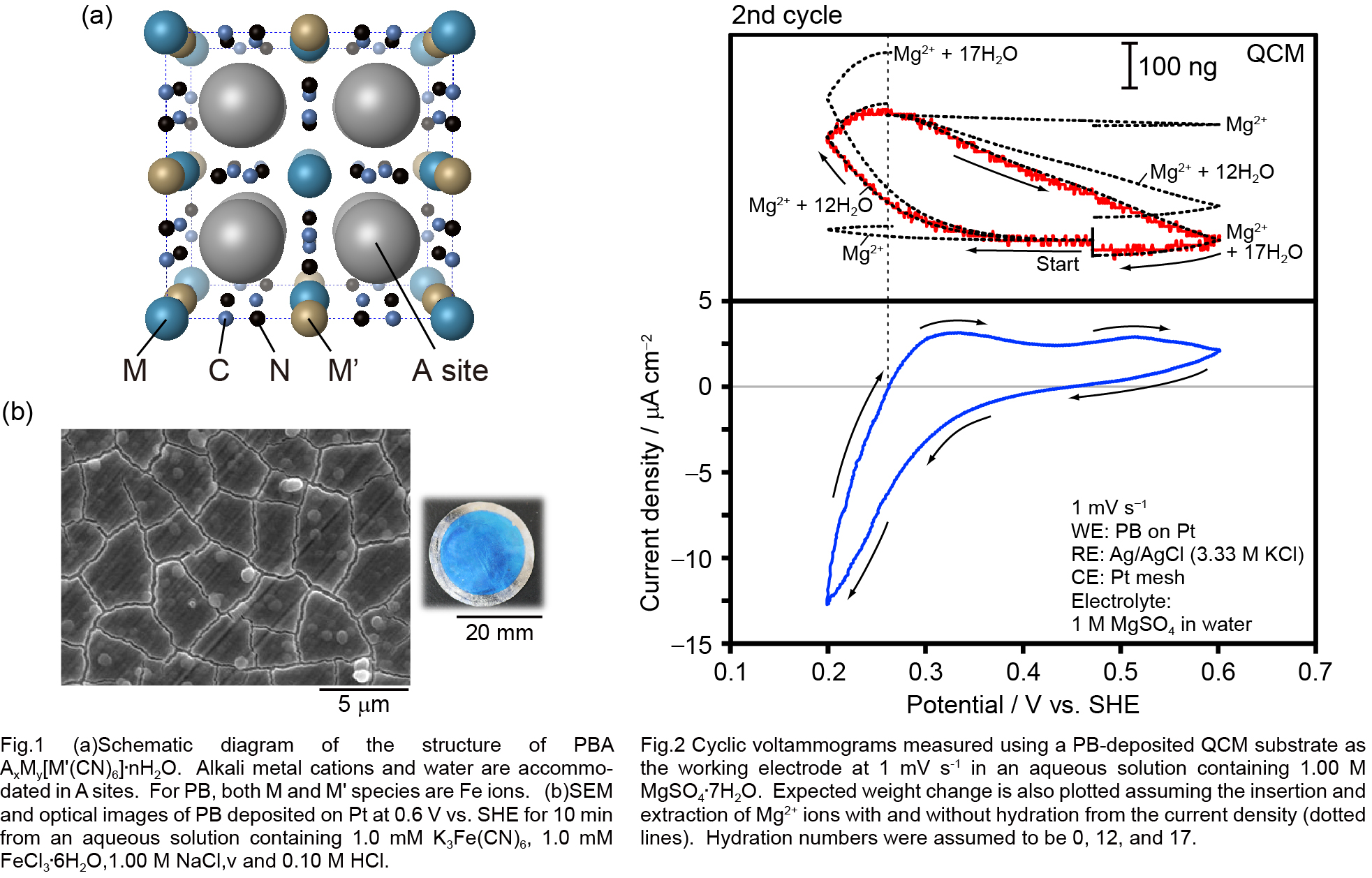