Sunrise, 2nd Floor, Star Ballroom 8 (Moon Palace Resort)
M. J. Workman, A. Serov (University of New Mexico), P. Atanassov, and K. Artyushkova (University of New Mexico, Center for Emerging Energy Technologies)
Fuel cells are efficient, non-polluting energy sources with potential for use in transportation applications. In order to achieve the oxidation of hydrogen and reduction of oxygen necessary for operation, fuel cells require catalysts. The catalyst currently used in most fuel cells is platinum. Though platinum is highly active, it is expensive and is a fundamentally limited resource. For fuel cells to be viable as large-scale replacements for internal combustion engines, their cost must be significantly reduced. One means of cost reduction is elimination of platinum in favor of non-platinum group metal catalysts (non-PGM). Nanostructured iron-nitrogen-carbon materials are active non-PGM catalysts that have the potential to replace platinum as the oxygen reduction catalyst. However, targeted research on these materials is hampered by a limited understanding of how the morphology and chemical composition of these catalysts contribute to their overall performance.

There is a complex interplay between different chemical moieties and morphology on various length scales. The length-scales of pores and surface roughness determine the types and efficiency of diffusion that allow fuel to be delivered to the active sites and removal of the products.(1) The length-scales of surface features also plays a role in the wettability of the surface (2) and may be related to the formation of the active sites in non-PGM catalysts.(3)

This work focuses on examination of surface features from the mesoscale to the macroscale using wavelet analysis of SEM and AFM micrographs. The technique used to elucidate the length-scales of surface features is the wavelet transform. Previous work using wavelet decompositions for image analysis have used the wavelet shape that has the lowest entropy or that gives the best ‘looking’ image decomposition. It is also common to take the mathematically calculated size of the wavelet to be representative of the physical features it models. We have empirically examined many wavelet shapes to determine which yields the most reliable correlation between wavelet detail output and physical feature size in SEM images. These size correlations are presented, and correlations between analyzed wavelet decompositions and measured physical properties including chemistry and performance are presented. The relationships between wavelet details in SEM and AFM images have also been explored.

Catalysts examined were synthesized from various precursors including aminoantipyrine, carbendazim, and nicarbazin.(4, 5) Several model systems were also examined including Au nanospheres, graphenes, and graphene oxides. Comparison of wavelet decompositions of SEM and AFM micrographs of selected catalyst and model systems is shown in Figure 1. Though the magnitude of the roughness is different between the SEM and AFM images, the trend is the same. Quantitative comparison of the roughness measured by SEM and AFM demonstrates that SEM micrographs are representative of the roughness of a surface. 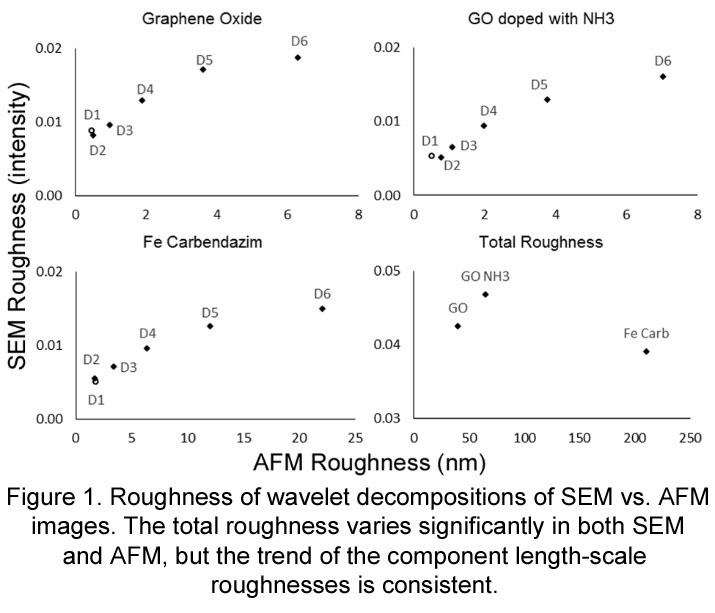