In this paper, a novel Ti-15Ta-5Zr alloy with α+β stable, homogeneous, biphasic microstructure was synthesized; this alloy revealed very good mechanical properties and hardness and a Young’s modulus of 42.2 GPa, which are more suitable for an implant material than those of other existing implant materials (Ti, Ti-6Al-4V).

The microstructure was identified by scanning electron microscopy (SEM). Electrochemical properties of the interface between new alloy and simulated physiological Ringer-Brown solution were investigated by the potentiodynamic cyclic and linear polarization and electrochemical impedance spectroscopy (EIS).

The cyclic potentiodynamic curves in Ringer-Brown solution (Fig. 2) showed the self-passivation of  Ti-15Ta-5Zr alloy with a large constant current domain that indicates the absence of the electron transfer reactions and the existence of the ion transfer reactions, namely, the constant thickening of the oxide layer, according with the high field mechanism. The curve for Ti characterized by a slow increase of the passive current density with the applied potential suggests that its native passive film seems to dissolve and repassivate. These behavior differences between Ti and Ti-15Ta-5Zr alloy are due to the alloying elements Ta and Zr, which stabilize, reinforce the passive film on the new alloy surface.

Alloy corrosion, Ecorr potentials have more electropositive value and passive current densities, ip are lower than those of Ti (Table 1) as result of the more compact, thicker, resistant passive film existing on the  Ti-15Ta-5Zr alloy surface, that contains both protective TiO2 and Ta2O5 and ZrO2 oxides. The alloy corrosion current densities, icorr and rates, Vcorr are lower (of about 70 times smaller) than those of Ti, proving a more protective passive film on the alloy surface. The alloy polarization resistances, Rpreached higher values (about ten times higher) than those of Ti, fact that represents a very corrosion resistant material.

The open circuit potentials of the new Ti-15Ta-5Zr alloy shifted to nobler values in time; this behavior indicates the film thickening that confers high protection to alloy. SEM micrograph evinced (Fig. 4) some depositions on the alloy surfaces after 2000 immersion hours in Ringer-Brown solution; it is a continuous layer formed by globular nanocrystals with the diameter of about 2-3 µm, with interwoven texture in a porous feature. EDX elemental analysis (Fig. 4) detected the presence of calcium, phosphorus and oxygen, namely calcium phosphate, a precursor of the hydroxyapatite, the major inorganic component of the human bone. Therefore, the alloy surface represents a suitable support for the adhesion of the bone cells.

Main electrochemical parameters attested a nobler behaviour and lower corrosion rates, proving more resistant passive film on the alloy surface (in comparison with Ti) that is reinforced, stabilized by the very protective oxides of the alloying elements Ta and Zr. The new alloy represents an advanced alloy in the domain of the non-toxic, non-allergenic ternary implant alloys. 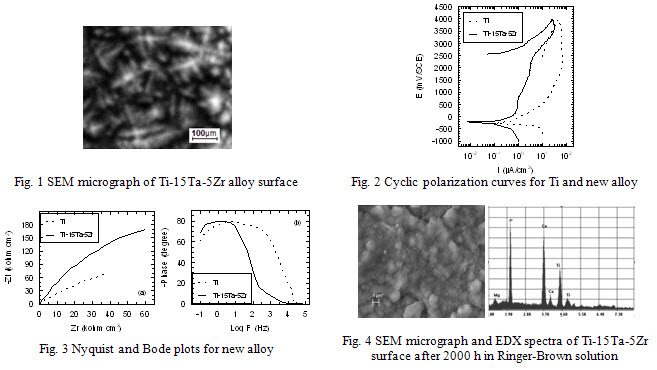