The Co/Pt dots with diameter ranging from 50 nm to 330 nm were lithographically fabricated on a cross-shaped Pt electrode for anomalous Hall effect (AHE) measurement. The rf field was generated from a Cu strip line with 2 μm in width fabricated just above the dot with insertion of an insulating layer. Fig. 1(a) shows the switching field Hsw of a single Co/Pt dot of 120 nm in diameter as a function of rf frequency frf for various rf field amplitude hrf. For hrf = 450 Oe, the Hsw significantly decreases from 5.5 kOe to 2.1 kOe with increasing the frf until the critical frequency. In the range above the critical frequency, the Hsw steeply increases and coincides with the value obtained in the absence of rf field. It should be addressed that this significant reduction of switching field is much more profound than the theoretical prediction based on the single macrospin model. To elucidate the switching mechanism, dot size dependent switching behaviors are studied as shown in Fig. 1(b). Hsw gradually decreases with increase in the dot diameter. In this figure, simulation results based on two different models, that is, single macrospin and finite cell models, are also plotted. It is very interesting that Hsw for larger and smaller dots agree with the finite cell and single macrospin simulation results, respectively. The finite cell simulation reveals that the this largely enhanced MAS effect for larger dot is resulted from the excitation of non-uniform magnetization precession. This size dependent switching behaviors are well explained by the spin wave dispersion theory for a magnetic disk.

This work was partially supported by Grant-in-Aid for Sciencetiﬁc Research from MEXT, the Management Expense s Grants for National Universities Corporations from MEXT, Strategic Promotion of Innovative Research and Development from JST, and the Storage Research Consortium in Japan. 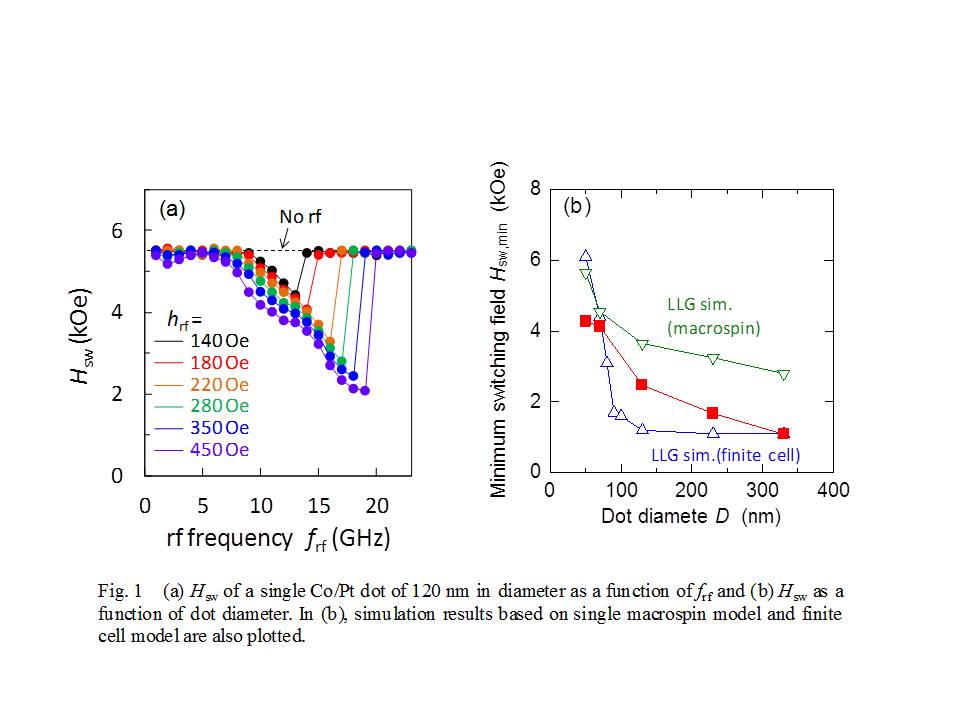