In current lithium industries, one of the most economical ways to extract lithium is by lime soda evaporation; a solar evaporation and chemical plant process, which takes between 12 to 24 months. After the solar evaporation, the concentrated brine is pre-treated to a pH of 2 in order to remove Boron by a solvent extraction. Lime (CaO) is then added to remove magnesium, sulphate, and borate. Calcium left in the brine is removed by a small amount of soda ash or sodium carbonate (Na2CO3). Then, the brine is heated to about 90°C and more soda ash is added to precipitate lithium carbonate 4, 5. This lime soda evaporationis considered as a long-process of lithium extraction. Therefore, the objective of this work is to develop a new, fast and inexpensive approach to recover lithium chemically, from the lithium sources that contain other metal cations.

Heterosite iron phosphate (FePO4) is a discharged product of lithium iron phosphate (LiFePO4). There are a few studies about the structure of heterosite FePO4 that report that it is more selective for lithium ions (Li+) over sodium ions (Na+). This structure displays  excellent reversibility charge/discharge properties 6,7. There small potential differences of the redox couple and the stability of LiFePO4 over a wide range of pH in an aqueous solution are the main advantages of this structure to this application 6.

This work investigates a novel process that may prove to be more economical than the lime soda evaporation process for lithium extraction. Heterosite FePO4 was used to selectively remove Li+ from the brine with the aid of a reducing agent (sodium thiosulfate; Na2S2O3). The resulting LiFePO4can be directly sent to lithium battery industries. In principle, the other cations could be retrieved back into the brine as shown in figure 1.

We have examined and demonstrated the process of lithium insertion into a heterosite FePO4 framework in aqueous salt solutions. In this process, the amount of Li+ uptake can take up to 46 mgLi+/gsolid and other cations (i.e. sodium, potassium, and magnesium) can take less than 3 mg/gsolid. Furthermore, the re-lithiated FePO4 performed satisfactorily as a positive electrode. This work could also be developed for future lithium recycling processes. 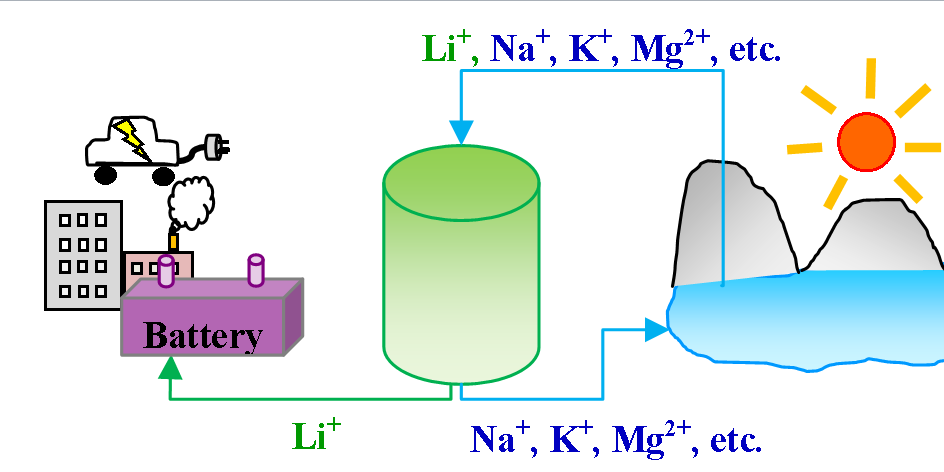