Sunrise, 2nd Floor, Star Ballroom 7 (Moon Palace Resort)
K. Sodeyama (Kyoto University & National Institute for Materials Science (NIMS)), Y. Yamada, A. Yamada (The University of Tokyo), and Y. Tateyama (National Institute for Materials Science (NIMS) & Japan Science and Technology Agency (JST) & Kyoto University)
Electrochemical stability of electrolytes during charge-discharge cycle is of great importance because the reductive or oxidative decomposition of the electrolytes degrades the durability of Lithium-ion batteries (LIB). Recently, some of the authors have reported that high concentration (HC) LiN(SO2CF3)2 (Li-TFSA) salt in acetonitrile (AN) electrolyte shows strong electrochemical stability against the reductive decomposition, though in low concentration (LC) solution AN is easily reduced and decomposed1. The control of the Li-salt concentration is a new concept to overcome the limitation of potential window of electrolyte and it has a large impact on the exploration for better LIB electrolyte. However, the atomistic origin of the improved reduction stability in HC system has been still an open question.

In this study, we investigated the mechanism of the improvement of the reduction stability of Li-TFSA/AN systems depending on the salt concentration by using first principles DFT-molecular dynamics (MD) calculations with explicit AN solvents2. We adopt DFT-MD calculation with extra electron, which is referred as the ΔSCF type analysis. It can include the relaxation effect of reductive electron and the decomposition after the reduction of electrolytes, while the usual HOMO-LUMO based discussions cannot treat the effects. We explored which molecule accepts the reduced one electron (1e) in HC and LC systems and discussed the origin of reduction stability.

In the HC systems under the 1e reduction condition, we found that TFSA anion sacrificially accepts reductive electron, because specific chained network structure is formed and the electron affinity of the anion shifts lower (Fig. 1a). The reduced TFSA anion was decomposed into the CF3 moiety and (SO2)2CF3N spontaneously. The energy level which accepts the extra electron is σ* CF3-S orbital and the single occupied molecular orbital (SOMO) level is stabilized upon the dissociation of CF3 moiety (Fig. 1b). This result indicates that the TFSA decomposed products can stack on the interface between the negative electrode and electrolyte, forming a sort of solid electrolyte interface (SEI). In fact, experimental XPS study confirmed the F-related species on the negative electrode, and it supports this sacrificial anion reduction mechanism.

In the LC systems, first reduction happens at AN solvent molecule coordinating to a Li+ ion (Fig. 1c). However, the C-N triple bond in AN does not decompose by 1e reduction during the MD sampling due to a certain barrier. The excess electron then migrates to the σ* CF3-S bond of TFSA, whose energy level is close to the C-N triple bond, and TFSA is sacrificially decomposed (Fig. 1d) even in the LC condition. It may prevent reductive decomposition of AN molecule, leading to improved electrochemical stability of the electrolyte. The decomposition of AN, which is observed experimentally, should be initiated after all the TFSA anions are depleted. Under the TFSA decomposed condition, we clarified that the 1e reduced AN does not decompose from thermodynamics and kinetics, but two electron (2e) reduction for AN is required for the decomposition of AN solvent.

This microscopic analysis proposes the concepts of “sacrificial anion reduction”, “competition between 1e and 2e reductions”, and “constructing chain network structure”, which can be general features for HC Li-salt systems. The mechanism will provide an important perspective for the design of LIB electrolyte with Li-salt concentration. In this talk, we will also discuss the diffusion coefficient of Li+ ion in HC and LC conditions. 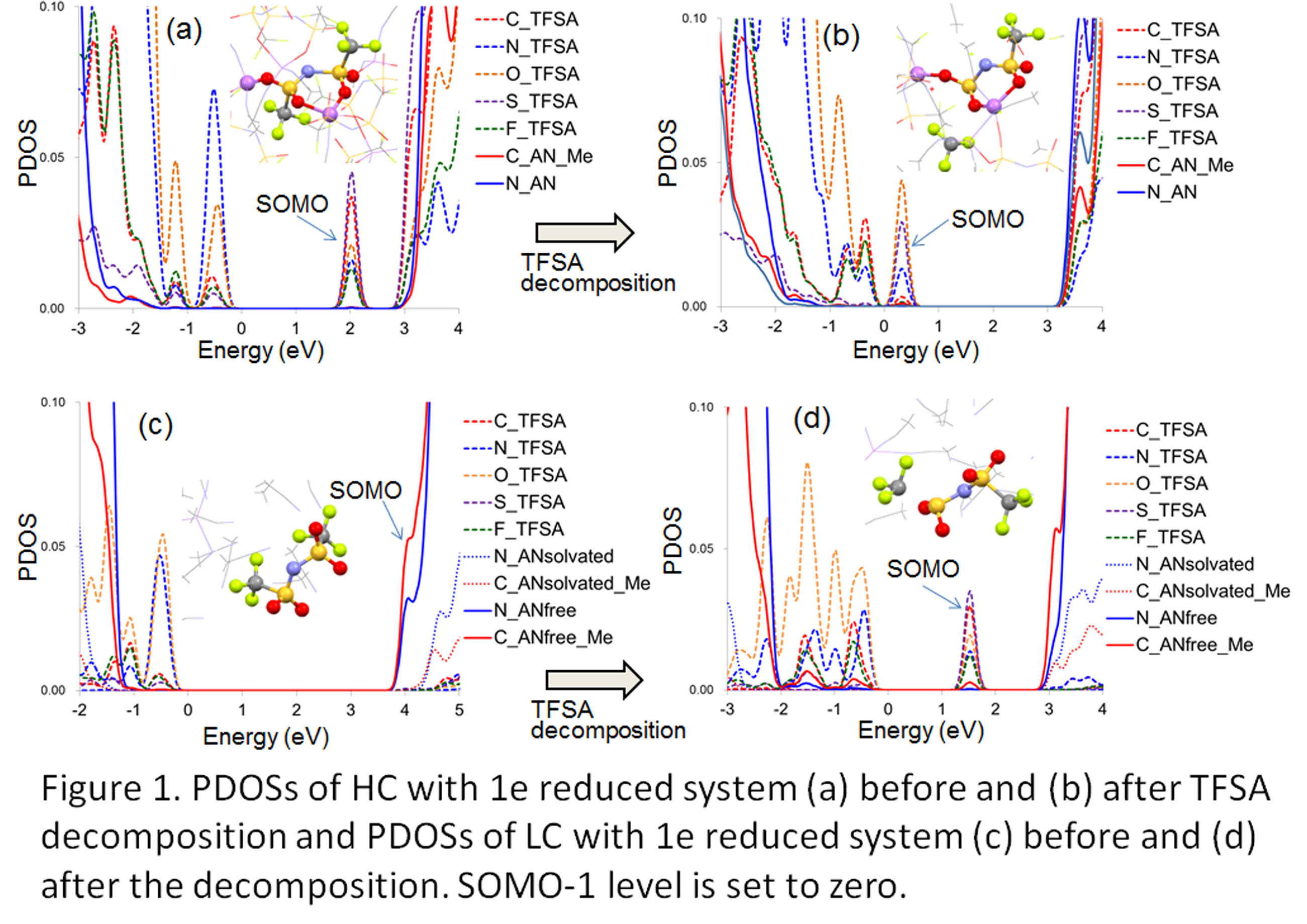