Sunrise, 2nd Floor, Jupiter 1 & 2 (Moon Palace Resort)
H. Sakai and T. Tokumasu (Tohoku University)
Hydrocarbon membranes (HC) are expected as a new polymer electrolyte membrane (PEM) of polymer electrolyte fuel cell (PEFC) by its high durability and low synthetic cost. There is one weak point in HC. That is low proton conductivity especially in low hydration level1 in comparison with perfluorosulfonic acid (PFSA) membrane. This difference between HC and PFSA is considered to be caused by high probability of deprotonation as well as membrane flexibility2. Thus, activation energy of deprotonation reaction (ΔEa) and energy difference before and after deprotonation (ΔH) are very important information to estimate the performance of membrane in the low hydration level. However, deprotonation mechanism of HC by water molecule(s) was not clarified yet. For PFSA, deprotonation process of sulfonic group by three water molecules has been already clarified by our study3. We showed characteristic reaction process in hydration level three. In this hydration level, sulfonic group of PFSA should be deprotonated smoothly by three water molecules via low ΔEa. ΔH in this reaction is enough low to prevent the reverse reaction. Thus, PFSA shows strong acidity. However, deprotonation mechanism and its properties about HC membrane are still unknown.
Then, we attempted to clarify the deprotonation reaction about HC species by some water molecules in the same manner as PFSA. Benzenesulfonic acid (C6H5SO3H) was adopted as a model molecule of HC. A relative configuration between sulfonic group and water molecules in reactant, transition state and product for each hydration level was set in the same manner of the analysis of PFSA3. Each geometries, that is, reactant, transition state and product, were calculated by B3LYP/6-311+G(d,p) level of theory. The basis set super position error was corrected by counterpoise method. All of calculations were performed by Gaussian094, installed on super computer systems of Institute of Fluid Science, Tohoku University. All of geometries were confirmed as appropriate stable state or transition state by the normal vibration analysis.
Energy changes along the reaction in hydration level from one to three were depicted in Fig. 1. All of energies were treated as relative energy; reactants are set as 0 kcal/mol.

Fig. 1. Energy changes along the reaction in each hydration levels.

The predicted ΔEas for hydration level one, two and three were 12.95, 10.02 and 4.16 kcal/mol, respectively. ΔEas were obviously decreased with increasing hydration level. ΔEas in these hydration levels were much higher than the heat energy around the 350K (≈ 0.7 kcal/mol), which was the operation temperature of PEFC. In hydration level three, predicted electronic energy of product was slightly larger than the reactant, which means that the product geometry which indicates SO3- group, H3O+ and two water molecules is barely unstable by 0.55 kcal/mol. Considering the computational error of this study, however, it is hard to evaluate this slightly large ΔH Only we can conclude that deprotonated state in HC is not favorable qualitatively. In HC, thus, ΔEa of deprotonation reaction of sulfonic group and protonation reaction of SO3- group are almost same. Then, those two reactions occur in the same probability. These results are different from PFSA’s results. ΔEas in PFSA species were 10.94, 5.24 and 0.70 kcal/mol in hydration level one, two and three, respectively. And ΔH in PFSA was - 3.72 kcal/mol in hydration level three. Compared with those results, both ΔEas and ΔH of HC are higher than those of PFSA. This difference is caused by the difference of its constituent. PFSA mainly consists of fluorocarbon which hasis strong electron withdrawing moiety. Due to the strong electronegativity electron withdrawing of fluorocarbon, both ΔEas and ΔH are very low. On the other hand, HC consists of phenyl group. Electron withdrawing ability of phenyl group is not so strong as fluorocarbon then both ΔEas and ΔHof HC are higher than those of PFSA.

Acknowledgement
This work was financially supported by the New Energy and Industrial Technology Development Organization (NEDO). And authors also thank to the super computer systems of Institute of Fluid Science, Tohoku University. 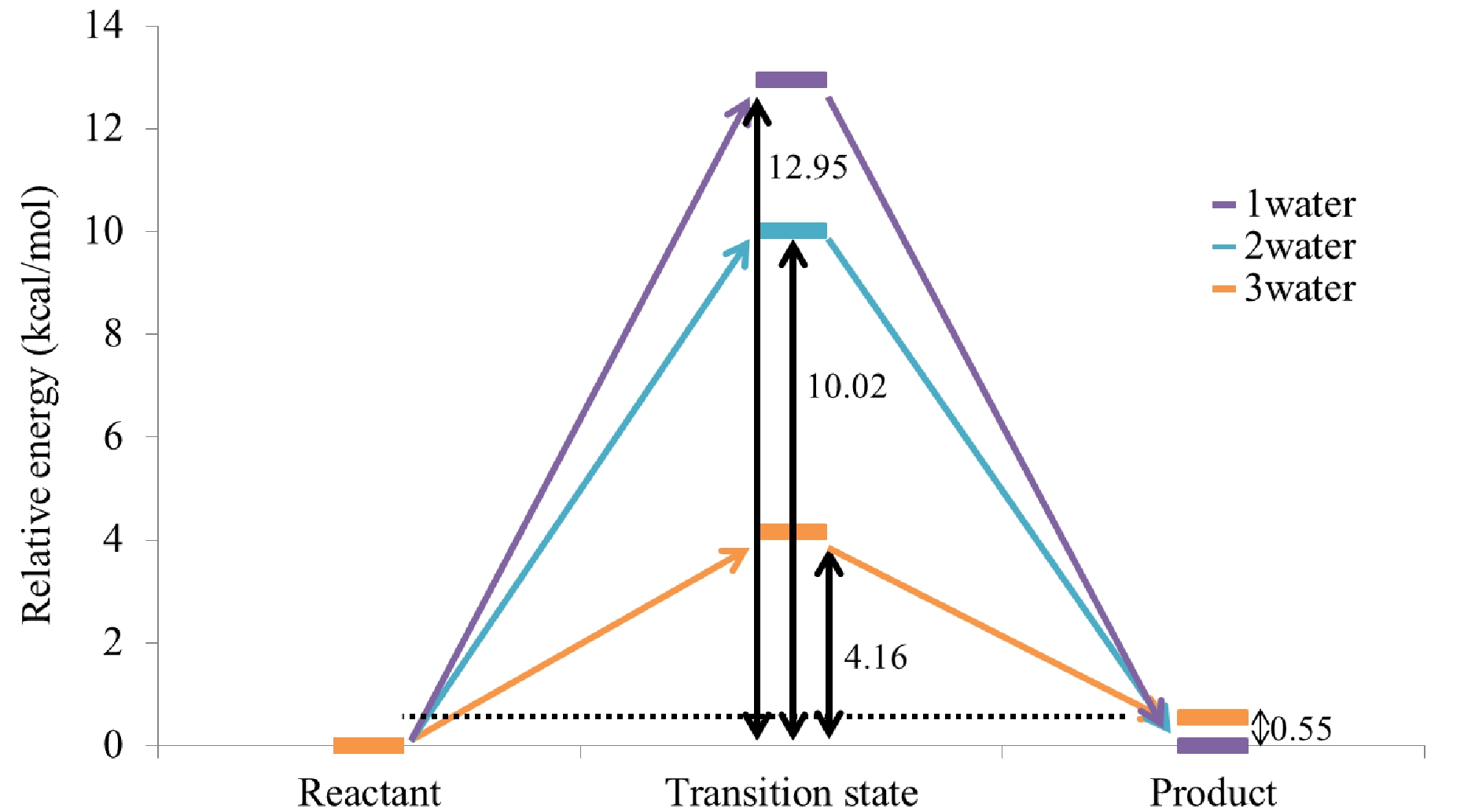