Sunrise, 2nd Floor, Star Ballroom 8 (Moon Palace Resort)
S. Hu, L. Scudiero (Washington State University), and S. Ha (Washington State University, Kyung Hee University)
The study of Pd-based core@shell bimetallic catalysts with Pd as the shell and another transition metal as the core has generated great interest in the field of PEM fuel cells because their electronic and chemical properties are completely different from pure Pd. As the anode catalyst in direct formic acid fuel cells (DFAFCs), an enhanced activity has been obtained for these Pd-based core@shell nanoparticles compare to pure Pd for formic acid oxidation [1,2]. However, there is a lack of understanding of how these added transition metals interact with Pd, namely by influencing their electronic structure and chemical property toward electrochemical oxidation of formic acid. It is important to fill this knowledge gap and find out a trend between the effect of the transition metals and the activity. This will help developing more efficient and less cost DFAFCs.

In this study, Au@Pd and Ru@Pd core@shell nanoparticles with same thickness of Pd are synthesized via a two-step process. Non-supported nanoparticles are used for TEM and X-ray photoelectron spectroscopy (XPS) analysis. TEM is used to characterize the structure and morphology of the nanoparticles. XPS is used to differentiate the chemical shifts due to charge transfer between Pd and Au (or Ru). XPS analysis shows a different binding energy shift for Pd peak of Au@Pd and Ru@Pd compare to that of pure Pd nanoparticles. In addition, a change of the XPS valence band shape and down-shift of the d-band center are also observed. This different binding energy shift indicates that Au and Ru core interact with Pd shell and significantly influence the electronic structure of Pd. Electrochemical measurements (cyclic voltammetry and chronoamperometry) are used to investigate the electrochemical activity of carbon supported Au@Pd and Ru@Pd core@shell nanoparticles toward formic acid oxidation. The Pd loading of the carbon supported samples is 40wt%. Based on CV results shown in Figure 1, Au@Pd shows the best activity toward formic acid oxidation, which is about twice higher than that of Pd/C. The relationship between the electronic perturbation and electrochemical activity will be elucidated in this paper. Furthermore, a real direct formic acid fuel cell test will be also operated with these Au@Pd and Ru@Pd core@shell nanoparticles under the various fuel cell operating conditions. 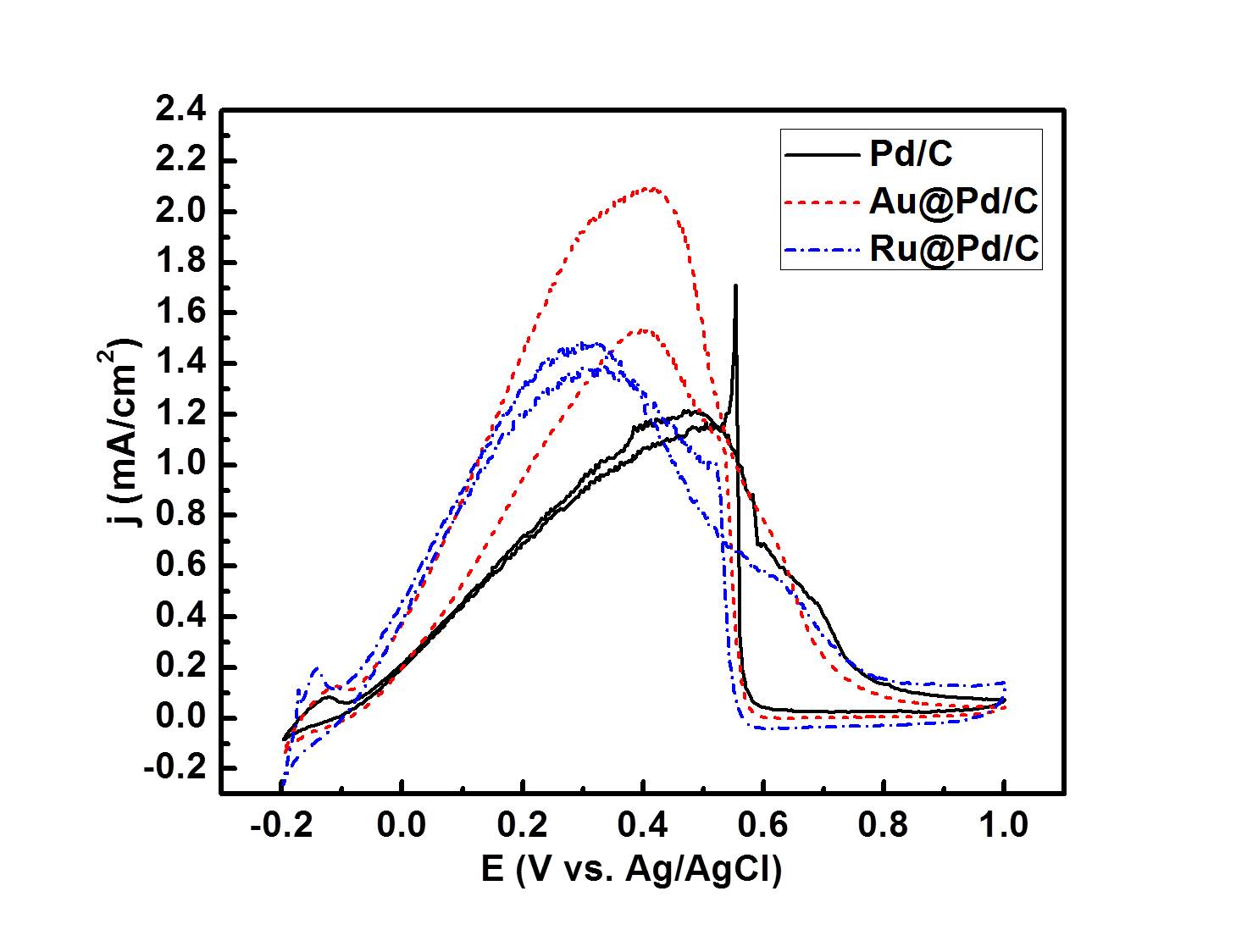