Sunrise, 2nd Floor, Star Ballroom 1 (Moon Palace Resort)
S. Zhang and N. Pan (University of California, Davis)
Supercapacitors prevail over batteries in certain niche markets, owing mainly to its much higher power density and the fit-and-forget benefits once installed. However, for certain applications, the power performance of supercapacitors may still not be sufficient. Herein, reduced graphene oxide is incorporated with activated carbon for supercapacitor electrodes to further improve their power densities. Our preliminary results validated this idea and achieved around 50% power density increase.

Graphene materials have been widely studied recently for supercapacitor applications, especially after the paper published by Ruoff et al in 2008 [1]. Various forms of graphene materials, graphene/metal compounds, graphene/polymer composites, and graphene/activated carbon hybrids have all been examined for supercapacitors, and some of them exhibited attracting performances. However, the industry is still quite reluctant to adopt graphene materials in their commercial products, and factors such as lower packing density, in-sufficient performance improvement, and higher cost, in comparison to the high-surface-area activated carbon (AC) currently in use, could be the major obstacles. Efforts have been devoted to increase the packing density of graphene materials by compression [2] or liquid-mediated approach [3]. Also, microwaved graphene oxide [2] and graphene oxide/biomass mixtures using conventional carbon activation technologies [4] have been proposed and certain performance improvements were reported. However, either using graphene materials directly as the major working medium or as carbon source for porous carbon via conventional activation technology is not desirable compared to currently used AC if only moderate performance improvement was achieved.

Our approach here is to use graphene materials as additives, rather than acting as the major active material, so as to improve the capacitive charge storage ability and decrease the resistance of the cell. Compared to currently used carbon black as the additive, graphene materials are superior with much better electrochemical performance and comparable electrical conductivity. Moreover, graphene materials can be readily incorporated into the industrial electrode fabrication process without sacrificing of the packing density of the resulting electrodes.   Therefore, a simple experiment was designed and conducted in this report. Briefly, the graphene oxide was first synthesized by Hummer’s method. And 200 mL of 1 mg/mL graphene oxide aqueous solution was reduced by 2 mL hydrazine hydrate at 100 °C under vigorous stirring for 24 hours. A control sample was fabricated by mixing Norit SX4 activated carbon (AC), super P carbon black (CB) and PTFE (85%:8%:7%). The active material for Samples 1 and 2 was a mixture of AC and reduced graphene oxide (RGO) at the same weight ratio of ca. 11:1. However for Sample 1, AC was blended with the graphene oxide in the solution prior to its reduction, whereas for Sample 2, both AC and RGO powder were grinded into a mortar (ACRGO). Afterwards, the same weight ratios as the Control Sample was used to fabricate electrodes, i.e., ACRGO:CB:PTFE (85%:8%:7%). Three symmetric C/C supercapacitors using different electrodes were then constructed and tested.

As shown in Fig. 1, the rectangular shapes of the CV curves are observed for all samples. The specific capacitance of the Control Sample is 103 F/g, and 133 F/g for Sample 1; 124 F/g for Sample 2, indicating an increase of specific capacitance by 29% and 20%, respectively, attributable to the additional capacitive charge storage from the reduced graphene oxides. Based on EIS tests shown in Fig. 2, the equivalent series resistances (ESRs) of the cells at 1k Hz are determined to be 0.9 Ω for Control Sample, 0.8 and 0.7 Ω for Samples 1 and 2, respectively. Using the combined mass of the two electrodes, the maximum power densities of Samples 1 and 2 are calculated as 45% and 55% larger than that of the Control Sample.  In summary, by adding small amount (=7.1w%) of RGO, supercapacitors with moderately increased capacitance, reduced ESR and significantly improved power density can be produced.

Figure 2. Nyquist plots of the cells, with the insertion showing the high frequency regions. 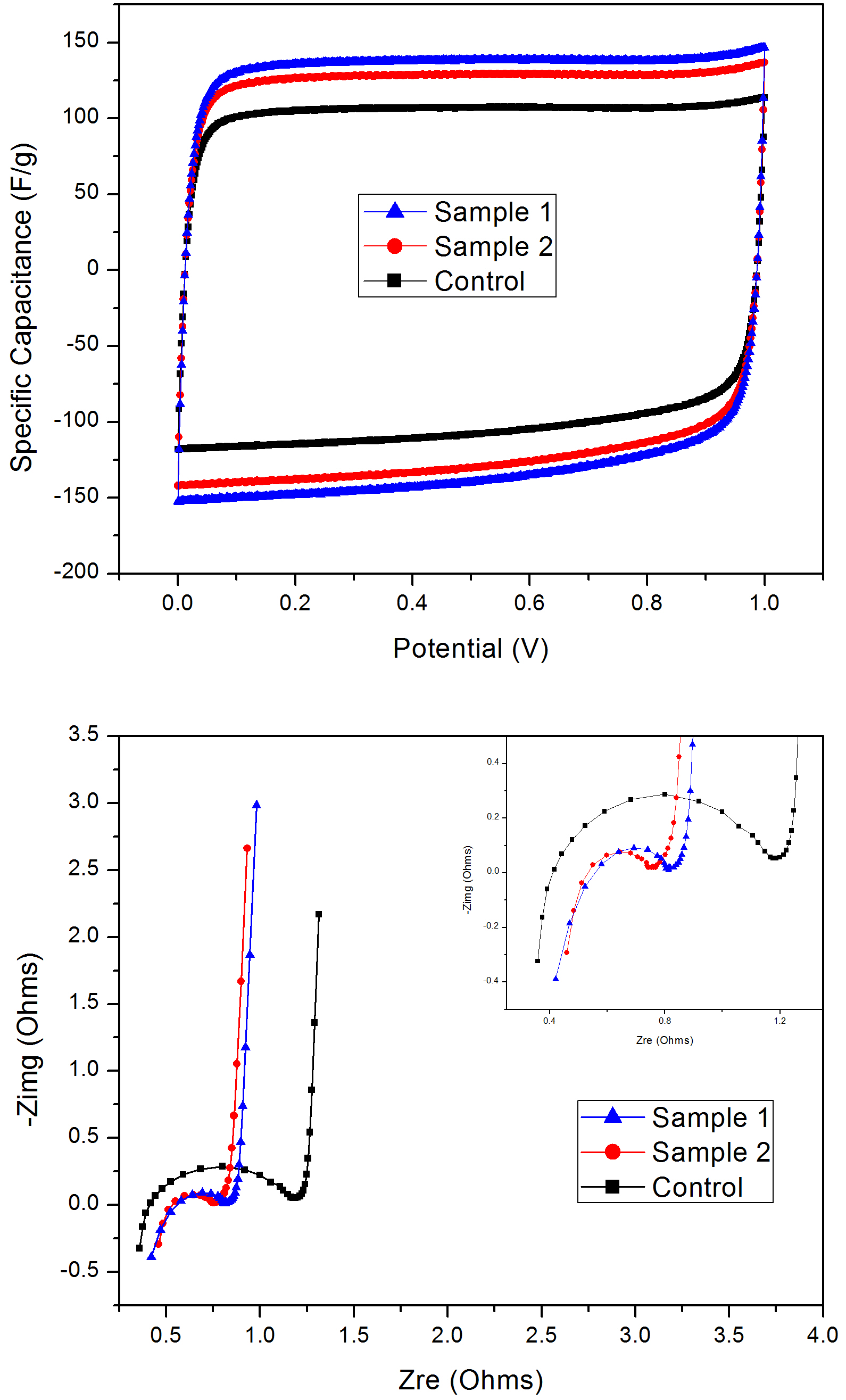