Sunrise, 2nd Floor, Star Ballroom 8 (Moon Palace Resort)
D. Zhao (National Univeristy of Singapore), J. Shui, L. Grabstanowicz, and D. J. Liu (Argonne National Lab)
Finding inexpensive alternatives for the platinum group metals (PGMs) has been the ultimate goal for proton exchange membrane fuel cell (PEMFC) catalyst research. Since the electrode/catalyst materials contribute to nearly half of a fuel cell stack cost, there is an urgent need to reduce or replace PGM usage. Among all the non-PGM candidates explored so far, transition metal doped nitrogen-carbon (TM-N-C) composites appear to be the most promising ones.  Generally, these materials are prepared by forming TM-N4 molecular complex over amorphous carbon support, followed by thermal activation.  Since non-PGM catalysts are known to have lower turn-over frequency per catalytic sitecomparing to platinum, their active site densities must be substantially higher to deliver a comparable performance. Using carbon support dilutes the active site density. The new approaches that could circumvent such limitation without the need of inert carbon support include the use of metal-organic framework (MOF) [1-3] and porous organic polymer (POP) [4] as the catalyst precursors.  Syntheses of these precursors have been perceived as tedious and costly, due to the involvement of multiple reaction steps and the use of chemicals in purification and separation processes.

At Argonne National Laboratory, we pioneered the research of using MOFs and POPs as the precursors for non-PGM catalyst synthesis [1, 3, 4]. More recently, we developed a new one-pot solid-state synthesis method of preparing ZIF-based (a subclass of MOF) catalyst for oxygen reduction reaction (ORR). [5] The new approach not only simplifies the preparation method of ZIFs-based electrocatalysts, rending it suitable for large scale production with low cost, but also paves the way of synthesizing ZIFs from various ligands to study their impact on the catalytic activity.

This approach is based on the solid-state synthesis of ZIFs, in which ZnO was mixed with N-containing ligands and heated directly to yield ZIFs with only water as the by-product. Four different ZIFs were prepared with this method containing ligands 2-methylimidazole (HmIm), imidazole (HIm), 2-ethylimidazole (HeIm), as well as 4-azabenzimidazole (H4abIm). The ZnO-ligand mixtures were heat-treated at 180 °C for extended time to produce the crystalline ZIFs, which were confirmed by powder X-ray diffraction. Low concentration organometallic iron compound, tris-1,10-phenanthroline iron(II) perchlorate (TPI), was added as the catalytic component in the mixture. The one-pot synthesized Zn(ligand)2TPI precursors were then pyrolyzed at 1050 °C under Ar, followed by acid-wash and a second heat-treatment under NH3. The final catalysts are denoted as Zn(ligand)2TPIP. Based on X-ray diffraction data, pyrolysis turned organometallic iron doped ZIFs into chemically modified amorphous carbons.   Nitrogen adsorption isotherm demonstrated the final catalysts with BET surface areas ranging from 443 m2/g to 1277 m2/g, which are among the highest values reported in the literature. XPS analysis also showed prodominated feature of pyridinic nitrogen embeded in these catalysts.

The ORR catalytic activities of the catalysts were tested using rotating ring-disk electrode (RRDE) methods. All four catalysts exhibited prominent ORR catalytic activities. The onset potentials (E0) of 0.914 V and half-wave potentials (E½) of 0.78 V were obtained, respectively. The catalysts were also fabricated into the cathodes of the membrane electrode assemblies (MEAs) and tested under the single cell operating condition. Figure 1 shows the cell polarizations and power densities of the four MEAs prepared with the four ZIF-based non-PGM catalysts at the cathode. Their performances, with the exception of Zn(Im)2TPIP, are among the best reported in the literature.

Acknowledgement: The authors wish to thank Chen Chen for her assistance in the MEA preparation.  The work performed at Argonne is supported by DOE Fuel Cell Technologies Office and Office of Science. 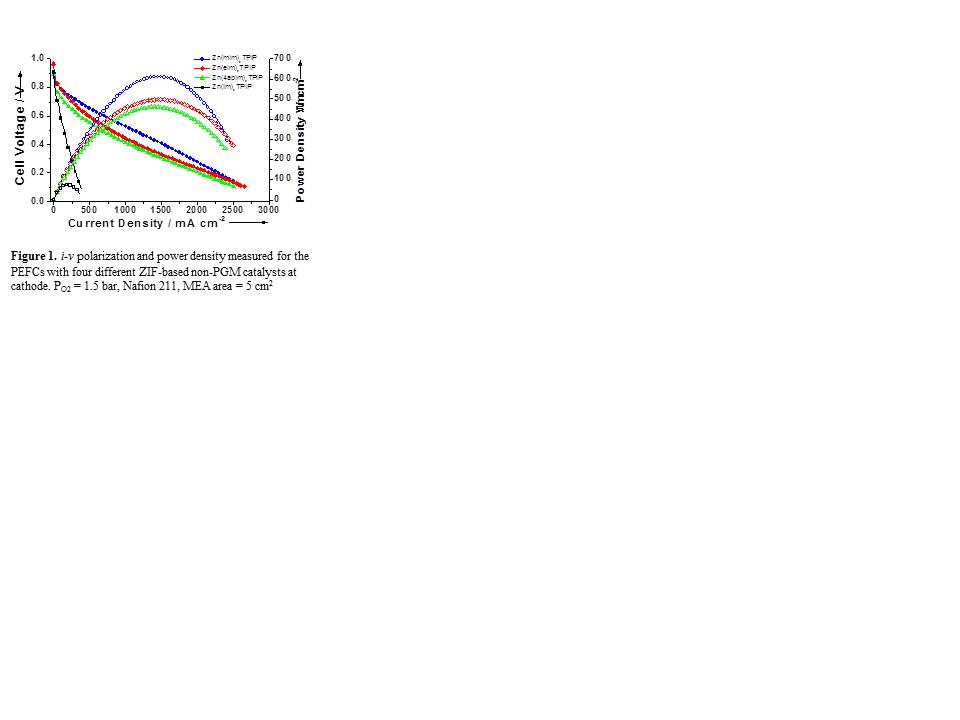