Expo Center, 1st Floor, Center and Right Foyers (Moon Palace Resort)
S. Terui and M. Morimitsu (Doshisha University)
Metal/air batteries use oxygen in air as the active mass of the positive electrode (i.e., air electrode) which has theoretically no limitation of the possible discharge capacity, while currently commercialized air batteries are still limited to a primary one, and an air secondary battery has not been realized in commercial applications. We have been developing a novel rechargeable air battery consisting of an air electrode, an alkaline electrolyte, and an MH negative electrode, i.e., MH/air secondary battery and have demonstrated a good cyclability more than 300 charge-discharge cycles and a high energy density over 650Wh/L [1-3]. For a further improvement in the cell performance, one of the important points is a low polarization air electrode for oxygen evolution during charge and oxygen reduction during discharge. In this study, we investigated the cell performance of the MH/air secondary battery using an air electrode consisting of a graphite-based conducting matrix with oxide catalysts and PTFE to improve gas diffusion behaviors of the air electrode compared to the nickel-based air electrode utilized in our previous studies.

The effects of the preparation procedure, the particle size of graphite powders, the weight ratio of catalyst, and others of the air electrode on the polarization for O2 evolution and reduction were investigated and the results indicated that the air electrode with 40 wt% of Bi2Ir2O7-z and the graphite size of 30 - 60 μm was appropriate to improve the polarization behaviors and superior to the previously utilized nickel-based air electrode. Especially, cathodic polarization was drastically reduced with the carbon-based air electrode, which was supported by SEM analysis; Bi2Ir2O7-zcatalysts were spread and dispersed on graphite so as to increase three-boundary interface for oxygen reactions.  Fig. 1 shows a comparison of discharge curves obtained in this and our previous studies, in which the discharge curve obtained in this study (red line) shows a stable discharge voltage for 15 hours that is higher than the previous one. The energy density achieved 845 Wh/L which is impossible to obtain with Li ion secondary batteries. These results indicate that a low polarization air electrode effectively improves the battery performance and the MH/air secondary battery is expected to show a higher energy density beyond 1000 Wh/L. 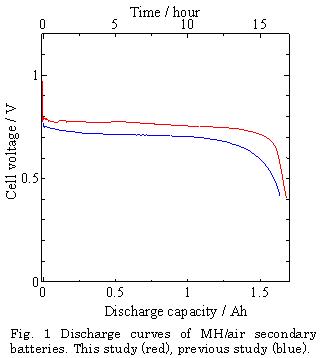