Expo Center, 1st Floor, Universal 3 (Moon Palace Resort)
A. Stevenson, D. Hu, and G. Z. Chen (University of Nottingham)
The remediation of spent nuclear fuels is increasingly seen as a requisite for sustainable nuclear power generation. As of yet, very few nations have navigated the social, technical and economic difficulties of installing operational geological repositories [1], despite the legacy of waste accumulation becoming ever more present. Current aqueous reprocessing technology (e.g. PUREX) offers a viable solution to the partitioning of neutron poisoning species (typically highly radiotoxic fission products (FPs) and minor actinides (MAs)), allowing the reuse of approximately 97% of spent fuel species [2]. However significant concern over the proliferation risk of a non-discriminatory separation process (one where plutonium can be selectively produced) coupled with the perceived economic costs of such technology has hindered wider acceptance of reprocessing. Pyroprocessing, involving a precise and controlled means of solid/liquid phase species separation in molten salts, can provide an appealing alternative.

A current UK based research consortium (REFINE) aims to deliver the materials science for a sustainable pyroprocessing mechanism in harmony with the next generation of nuclear reactors (Gen III+, Gen IV). Work at the University of Nottingham is focused on exploiting the FFC Cambridge Process [3], renowned for the direct electro-reduction of metal oxides such as TiO2 or Cr2O3 [4, 5], as a means for a controlled selective direct reduction and anodic dissolution of spent fuel species.

In this novel approach to partitioning using potentiostatic electrolysis in a three electrode cell, the mixed oxide preforms (spent fuel surrogates) are pressed with 2 tonnes uniaxial pressure and sintered for 2 hours at 1173K to form a palletised electrode which is then selectively reduced in a molten CaCl2 electrolyte (at 1083K). By reversing electrode polarisation, any formed metallic phases are selectively separated via anodic dissolution and electroplated to form a pure (or alloyed) metallic deposit on the counter electrode for recovery. Feasibility was first assessed by a 2NiO-CeO2 mixed oxide pellet (Ni2Ce molar ratio) because of the large difference in redox potentials of NiO and CeO2, the relevant working electrode reactions given as:

CO/CO2 is produced from a consumable graphite counter electrode. This process was shown to be successful in the partitioning of the produced nodular Ni from 2NiO-CeO2 using a reduction potential of +1.53 V (vs. Ca/Ca2+) and then an oxidation potential of +2.19V vs. Ca/Ca2+; metallic phases and potentials emulate those shown elsewhere in the literature [6, 7]. Surface atomic presence of Ni was lowered to 8.26% from 29.85%, as examined by EDX and morphology by SEM (figure 1). Intermediate species formation (i.e. CeOCl [CeIV to CeIII]) observed in some early experiments, and which is parasitic to the selective partial reduction mechanism, could be avoided by precise potential control.

More representative electrochemical surrogate materials (ZrO2 for UO2, CeO2 for PuO2 and Gd2O3 for various MAs) were then selected for use in a series of concept experiments. In this paradigm, the benefits of solid phase pyroreprocessing can be assessed on the ability to separate U and Pu from MAs, seen as an integral requirement for non-proliferation and hence more global acceptance of the technology. Cyclic voltammetry was used to establish the hierarchy of reduction between oxide components and what, if any, species interactions exist during electrochemical treatment. Results herein will determine the applicability of a multifaceted, direct and proliferation resistant process for current and future nuclear fuel recycling. 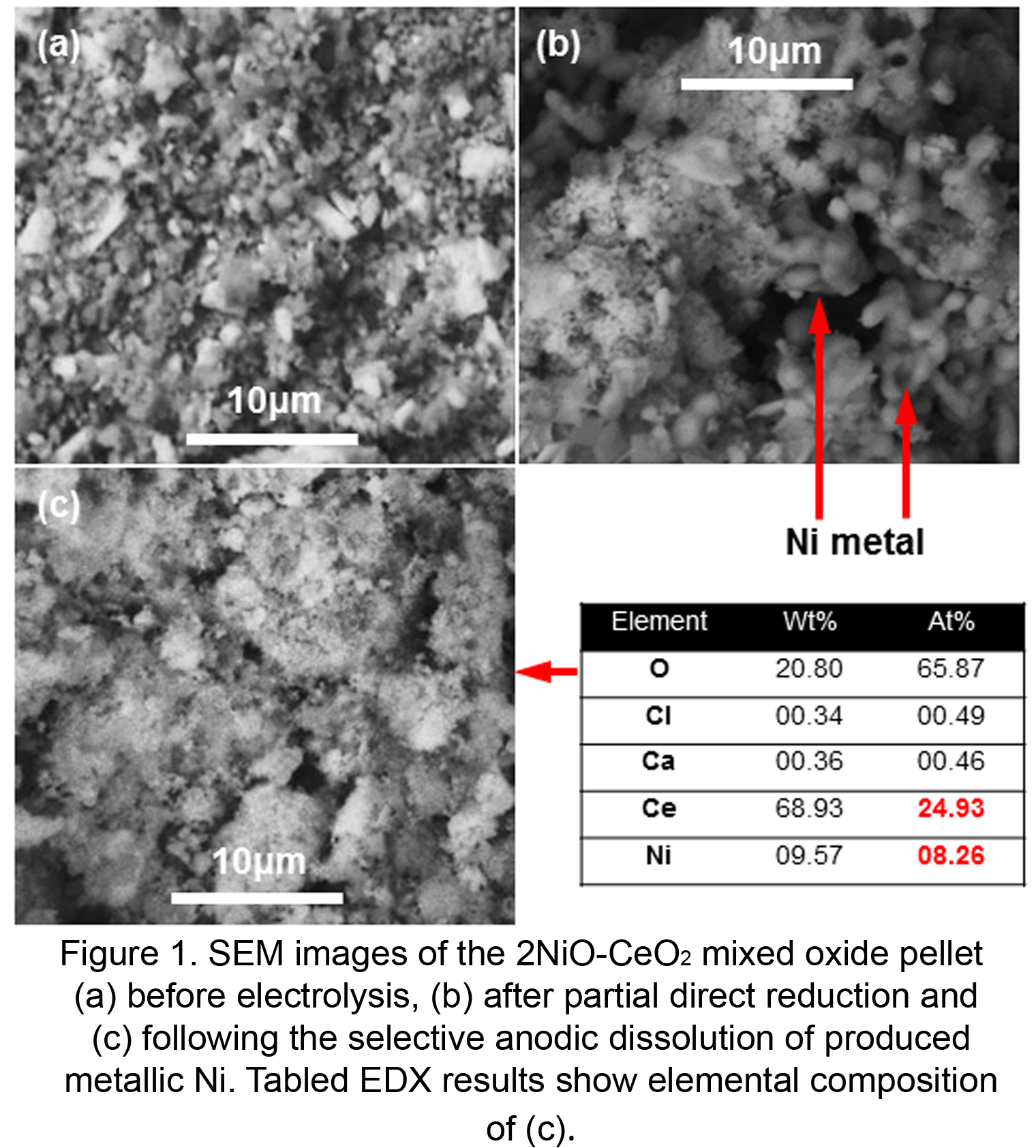