Performance of SSFC (and EFC) system strongly depends on the flow ability of the anolyte and catholyte suspensions combined with their electronic conductivity which is governed by the extent of the carbon black percolation. In this regards, we have recently investigated the rheological and electrical behaviours of two carbon blacks [5], namely, Ketjen black EC-300 (KB) and C-NERGY Super C45, which differ by their primary particle size, and blends of Li4Ti5O12 (LTO) and KB, suspended in an organic electrolyte, a solution of 1M of Lithium bis(trifluoromethanesulphonyl)imide (LiTFSI) in propylene carbonate (PC). The electrochemical performance of the LTO/KB/PC-LiTFSI suspension was investigated vs. lithium metal electrode as function of the cycling rate in static mode (i.e. no flow) and using a home-made cell that allows studying the influence of the thickness of the suspension [6].

Recently, we demonstrated the very beneficial influence of the addition of a nonionic surfactant in the composition of the LTO/KB/PC-LiTFSI anolyte suspension. All practical properties are improved with respect to semi-solid redox flow application. As a matter of fact, the viscosity is decreased, the electronic conductivity is increased and is less affected by the shear flow, and the electrochemical performance is increased. Moreover, a much better stability with time of the suspension is obtained, which means the preservation of its performance with time.

Figure 1. (a) Variation of the (a) conductivity Σ and of the (b) viscosity η with the shear rate for 20LTO3KB composite suspensions at 0 and 5 wt% TX (at 25 °C). (c) Comparison of the typical galvanostatic discharge/charge profiles of 20LTO3KB anolyte suspensions without and with 5 wt% of the non-ionic surfactant (TX) obtained in static mode (no flow) at C/25 rate for 0.75 mm thickness. The arrows denote the signature of an heterogeneous electronic wiring of the LTO particles in the 0TX anolyte. 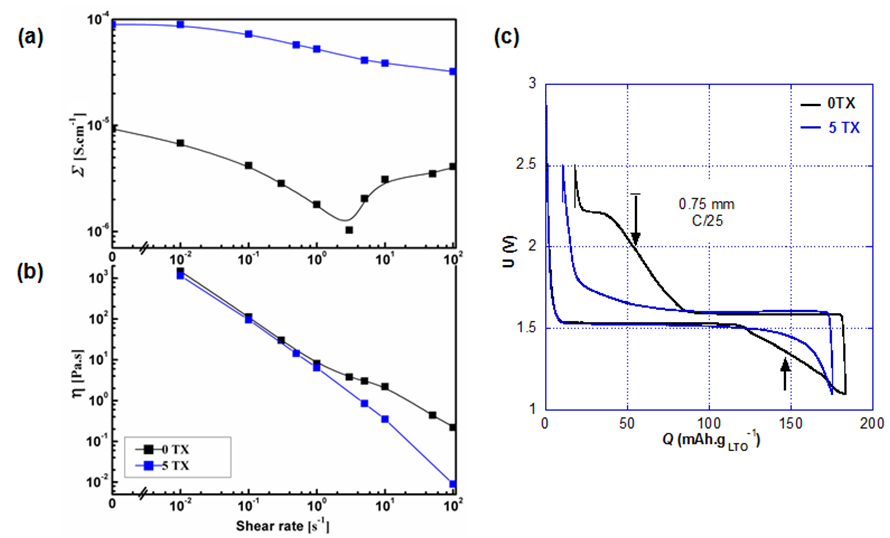