Yao et al. invented "relaxation analysis" to make transition of electrode materials from kinetically preferred state to equilibrium state clear. Olivine-type cathode materials are included in it1-3. These materials are promising, having both large theoretical capacity and fine stability4.

Synchrotron X-ray absorption near edge structure (XANES) method is a powerful tool to investigate the structural/electronic properties. XANES enable to measure the kinetically-preferred state directly during a reaction. In this study, we measured the in situ Fe K-edge XANES of LiFePO4 cathode during lithium insertion for the purpose of investigating the kinetically-preferred structure and comparing the result with that of relaxation analysis obtained by using the XRD-Rietveld method2.

Cathode was prepared by mixing LiFePO4, carbon black, and polyvinylidenefluoride with a weight ratio of 70:15:15 in N-methlpyrrolidone solution. The slurry was spread onto aluminum foil current collector and dried in a 120°C vacuum oven. The cathode and lithium metal anode were separated by a polypropylene membrane separator. LiPF6 (1 M) in ethylene carbonate/diethyl carbonate (EC/DEC) (3:7 v/v) was used as the electrolyte. The 2032-type coin cell with X-Ray window was assembled in an argon-filled glove box. We first charged the cell to 4.0 V at a rate of 0.19 C and took 12 minutes for rest when the voltage got to 4.0 V. We subsequently discharged the cells at a rate of 0.32 C to 2.65 V.

In situ Fe K-edge XANES measurement was performed in transmission mode at beamline 5S1 of Aichi Synchrotron Radiation Center. We took 3 minutes measurement and 1 minute interval per scan; the scan range was 150 eV before the Fe K absorption edge and 1000 eV after that. We merged three continuous patterns into one pattern to decrease noise and to improve the analysis precision. The composition x in Li(1-x)FePO4 of each merged pattern was calculated by integrating the current. We carried out a two-components analysis based on the linear combination of the last merged pattern, called Li-rich phase hereafter, and the merged pattern during the rest time before lithium insertion, called Li-lean phase hereafter, for either end by using Athena5program.

The composition of Li-lean phase and Li-rich phase were calculated as Li0.09FePO4 and Li0.85FePO4 respectively by using the integrating current. Figure 1 shows an example of two-components analysis for the composition of x = 0.28 in Li(1-x)FePO4 . The XANES pattern was well fitted with a low χ2value of 0.15%. It was found that the relative amount of Li-rich phase from two components analysis, 89.6%, was larger than the amount, 82.9%, calculated from the composition x in Li(1-x)FePO4. The large amount of Li-rich phase out of linear relationship may indicate that Li-rich phase with lithium defects formed in large amount during lithium insertion process. This is consistent with the result of the "Relaxation Analysis"2using the XRD-Rietveld method. 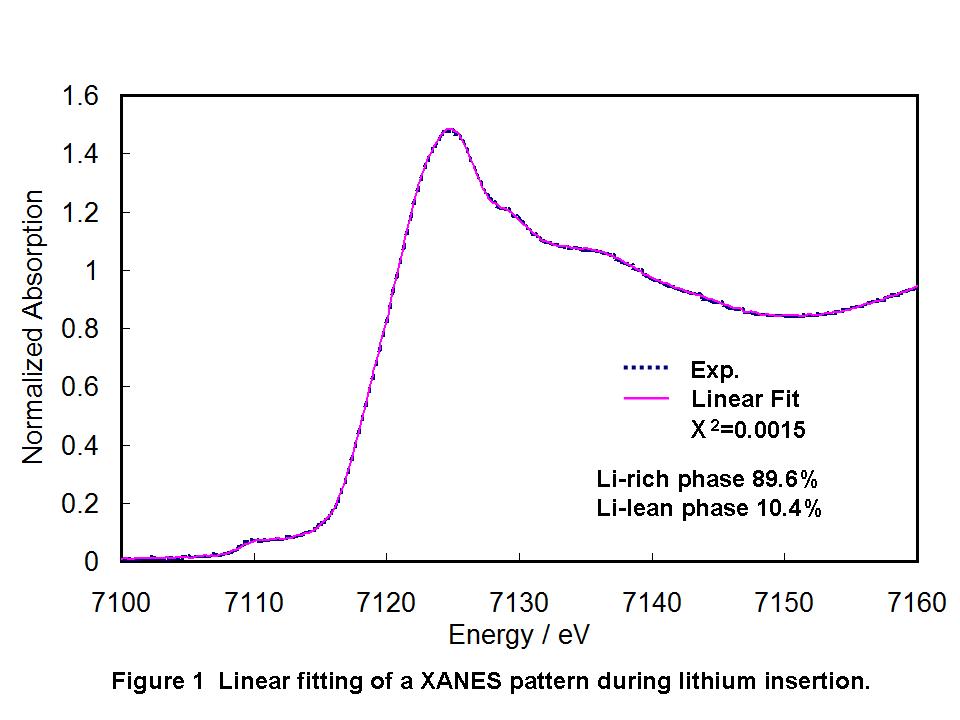