Lithium-ion batteries occupy a large and increasing share of the energy storage device market as a result of their excellent performance in terms of long-life, energy density and high safety. Among the various electrode materials for LIBs, graphites which are representative of carbon materials have been the most commonly used negative electrode materials due to their low working potential close to lithium metal anode, and remarkable cycling performance. As lithium-ion cells typically operate beyond the thermodynamic stability of organic electrolytes, the reduction products arising from chemical reactions during the first few cycles form passivating films on the carbon anode surface, as we call it 'solid electrolyte interphase (SEI)'.[1] Such SEI, which is comprised of electrochemically insulating layer, plays important roles of preventing the further electrochemical reactions between electrode surface and electrolyte and enabling only lithium ions tunnel through the layer. It is well known that the formation of SEI layers is a determinant factor on the performance of LIBs, affecting cycle-life, life time, power capability and even safety.[2]While the SEI plays an essential part in delivering the best performance in cells, the development of SEI layers are caused by the irreversible reaction accompanying an electrolyte decomposition, which makes the Coulombic efficiency to decrease during the first few cycles. When the stable SEI is not formed, any accidental misuse such as overcharge, high temperature exposure, and mechanic impact might damage the already formed SEI, resulting in more irreversible reaction during charging. The new anode surface, exposed to the electrolyte, immediately reacts with it to form a fresh thin protective film, which eventually leads to a poor cycleability and other undesirable properties in LIBs. Thus, to improve the performance of the cell, not only minimization of the electrolyte degradation but also thinner SEI film which provides an excellent passivating roll is required because thick and resistive SEI film is not favorable to battery operation.

Many research studies are thus focused on the improvement of the chemical nature and morphology of SEI. For the modification to SEI films having superior properties, several previous papers reported the polymer binder including the SEI ingredients and their electrochemical effects of LIBs.[3,4]The effects of the surface modification of the graphite electrode by the functional polymer binder, such as poly(acrylic acid), have been reported in several papers. Concretely, it has been demonstrated that the polyion complex layer, which have oxygen species as functional groups, could play the role like artificial SEI to assist the facile penetration of Li ions. Obviously, the stable and efficient operation of LIBs is closely connected with ingredients of surface films, morphology, and coverage feature.

Here we report that artificial pre-SEI, which is driven by Li ions containing polymer binder with functional group (-COOLi), can enhance the Coulombic efficiency and cycleability (Fig. 1). Furthermore, electrochemical performance is compared for SEI films that are produced from some different binders, in which different degree of lithium quantity is included in ISOBAM polymer.

Fig. 1. (a) 1H-NMR spectra substituted ISOBAM polymer by 20, 50, 80, 100 amounts of Li ions, respectively. (b) Cycleability of SFG6 graphites with all investigated binders. 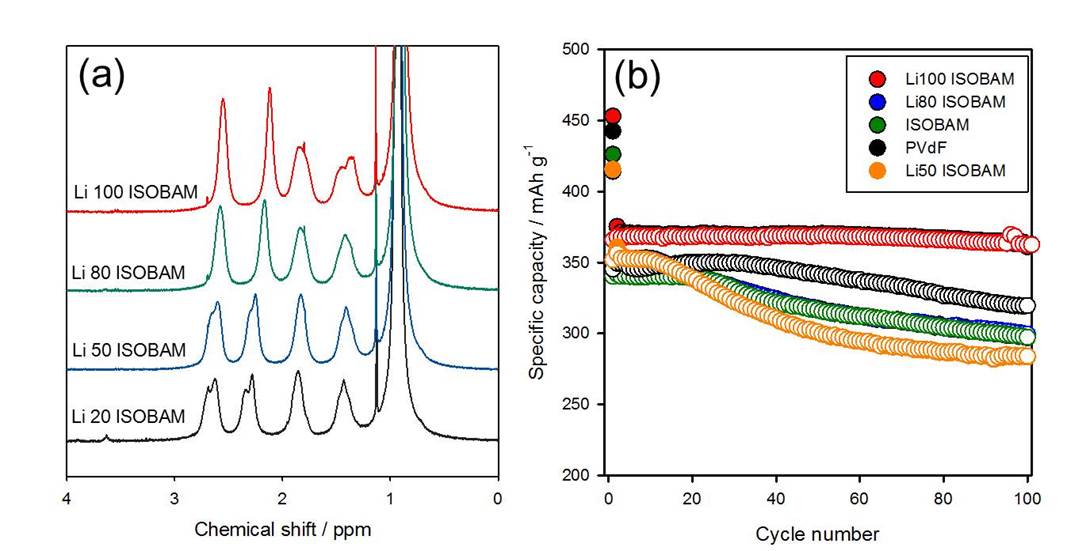