Cathode catalysts without using platinum have been extensively investigated over the past several decades for the significance of cost reduction of polymer electrolyte fuel cell.

Metallocomplexes is one of prospective non-Pt-based cathode catalysts such as metalloporphyrin and metallophthalocyanin. Bisides these complexes, Cu complexes supported by pyridylalkylamine ligands have recently attracted increasing attention as alternative oxygen reduction catalysts, which are known as a model of some dioxygen-activating enzymes. The Cu complex has the potential to have good oxygen reduction reaction (ORR) activity because some original enzymes such as cytochrome c oxidase (CcO) catalyze oxygen reduction with high efficiency. Although, some studies of the ORR activity of the Cu complexes on an immobilized electrode in an aqueous solution have been reported recently1), the correlation between the ORR activity and the redox property of the CuII/CuI couple of the complex has been unclear. Therefore, it is very important to analyze the relationship between the ORR activity and the redox properties of CuII/CuI of the Cu complexes for the improvement of the ORR performance. In this study, we examined the redox properties of a copper complex, CuII-tmpa [tmpa = tris(2-pyridylmethyl)amine] in a buffer solution at various pH, and investigated its effect on the ORR activity.

The CuII complexes supported by tmpa were synthesized according to the reported procedures2). Voltammograms under quiescent conditions were taken in 10 mM Britton-Robinson buffer solution (CH3COOH, H3PO4, H3BO3, supporting electrolyte: 10 mM Na2SO4) containing 0.3 mM of the copper complex. All measurements in this study were performed using glassy carbon as a working electrode, Pt coil as a counter electrode, and Ag|AgCl|KCl(sat.) as a reference electrode.

Figure 1 shows voltammograms of CuII–tmpa under quiescent and oxygen-saturated conditions. The data was displayed versus RHE. The voltammograms show that CuII–tmpa has the ORR activity in a wide range of pH and decreases in overpotential as pH was raised, though the current density was decreased above pH 12.0.

CuII–tmpa under argon-saturated conditions showed clear reversible voltammograms of CuII/CuI redox pair, so that we were able to evaluate the redox potential. A potential-pH diagram reveals that a pKa value of CuI species is ca. 12.0. This result suggests that hydroxyl anion coordinates the CuI center in the strong alkaline solution, which causes the catalytic current decrease. We will also discuss about additional results of spectroscopic measurement which support the hypothesis as shown above with respect to the structure of CuII–tmpa. 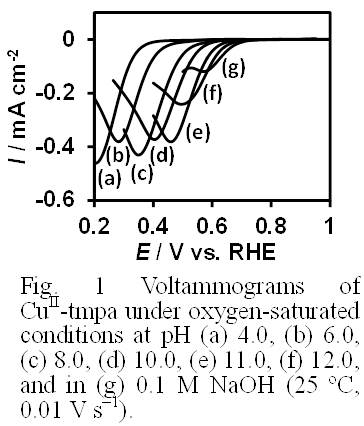