Sunrise, 2nd Floor, Star Ballroom 1 (Moon Palace Resort)
A. Jänes, T. Thomberg, J. Eskusson, and E. Lust (Institute of Chemistry, University of Tartu)
Supercapacitors (SC) are well known for their good power performance and extreme stability in terms of cycle life. Today, manufacturers typically specify an operation temperature range from -40 ºC to 70 ºC for capacitors based on acetonitrile (AN) or propylene carbonate (PC). While low temperature performance of SC is rather good, when using AN as an electrolyte solvent, but the high vapour pressure of AN at temperatures above 70 ºC is a significant drawback. Temperature aspects of SCs play an important role for degradation and lifetime estimations and for the optimization of SC performance with respect to a specific application. A very important problem is associated also with the non-aqueous electrolyte properties like the region of ideal polarisability, viscosity and conductivity, obtaining the specific energy and power densities and other characteristics of SC. However AN low boiling point means that the vapour pressure would be high in hot environments, thus, the high flammability and risk of explosion at higher temperatures, decreasing noticeably the safety issues for SCs, are critical. Propylene carbonate was used as the most suitable solvent, based on a comprehensive consideration taking into account the good electrochemical stability, conductivity and performance at moderate temperature. The electrochemical stability window of tetraalkylammonium salts in organic solvents determined at microporous carbon electrodes suggests the possibility of operating voltages up to 3.2 V [1-6].

The main aim of this paper is to study the electrochemical characteristics of propylene carbonate (melting temperature -48.8 ºC, flash point 132 ºC, boiling temperature 242 ºC) based supercapacitors using the microporous TiC-CDC electrodes within wide region of temperature, i.e. from -45 ºC to 100 ºC [7].

Cyclic voltammograms measured at different temperatures (Fig. 1a) indicate that only at T > 80 ºC, noticeable deviation of system from ideally polarisable system behaviour has been established at ΔE > 3.0 V. Thus, some faradic processes started. With the decrease of temperature lower than 0 ºC noticeable decrease of capacitance takes place. Surprisingly, even at -45 ºC, quite remarkable capacitance values have been established (C > 50 F g-1).

For the more detailed analysis, the constant current charge/discharge curves have been integrated to obtain the charge densities accumulated during charging Qch and discharging Qdisch steps (Fig. 1b). The calculations show that in agreement with CV data measured at -45 ºC ≤ T ≤ 70 ºC, the coulombic efficiency is very high (η ≥ 97.8 %) at ΔE = 3.0 V. The significant decrease of Qch and Qdisch takes place at temperatures lower than -30 ºC (η ≥ 99.7 %). Coulombic efficiency η ≤ 99.4 % has been calculated at T = 100 ºC.

Constant power charge/discharge tests have been made using two electrode SCs at different temperatures. The energy and power relationships (calculated taking into account the total active material weight of two electrodes) for the SCs based on the TiC–CDC electrodes at different T show that very quick decrease of specific power (Fig. 1c) has been established for SC tested at -35 ºC, explained by high viscosity and high series resistance values of propylene carbonate based electrolyte.

The present study was supported by The Estonian Centers of Excellence in Science: High Technology Materials for Sustainable Development, ETF Project 9184, European Regional Development Fund Project SLOKT10209T and Project IUT20-13. Authors of the paper would like to thank Ph.D. Tavo Romann for depositing Al on the electrodes. 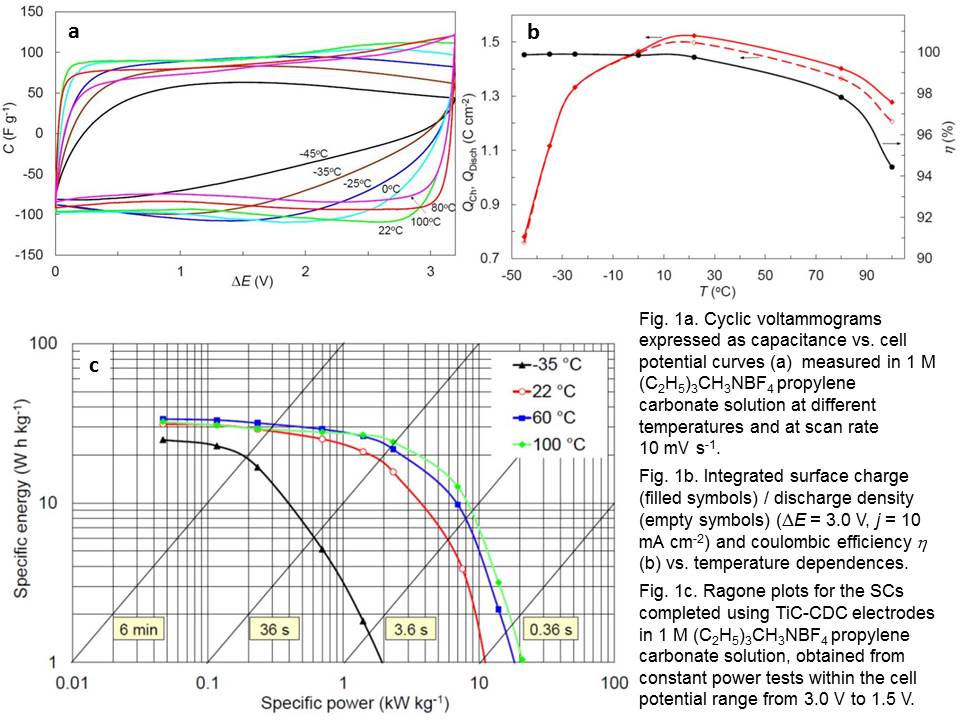