In addition to introducing oxygen-deficiency to the TiO2 lattice, n-type doping with higher valent cation such as Nb5+ is commonly used technique to obtain conductive titanium oxide.  Doped Nb5+ cations introduce carrier electron into Ti-3d band, which leads to the increase of conductivity of the oxide.  In this work, titanium oxide supports with different dopant concentration and reduced level were prepared, and its activity for ORR and stability against potential cycles were examined.

Nb-doped TiO2 (Nb: 1-10 at.%) nanoparticles were prepared by flame spray method using diluted organometallic compounds as metal sources.  The obtained Nb-TiO2 powder is a mixture of rutile and anatase structures and consists of 20-50 nm particles with BET area of 60-80 m2/g.  Reducing treatments of the oxide was carried out by irradiating with Nd:YAG laser operated at λ = 355 nm in acetonitrile [3].  Pt nano-particles were deposited on the oxide support (10-20 wt.%Pt) by impregnation-reduction method.  The electrochemical measurements was conducted by rotating disk electrode (in 0.1M HClO4) and MEA (at 80°C, 100%RH).  Durability of the catalyst was examined according to the FCCJ-2011 protocols (1.0 V-1.5 V vs RHE for catalyst support durability, 0.6 V-1.0 V vs RHE for Pt NPs durability) [4].

Figure 1 shows specific ORR activity (at 0.9 V) of Pt/TiOx and Pt/Nb-TiOx along with that of a conventional Pt/C in O2-saturated solution at 25°C.  As niobium content of the oxides increases, the ORR activities decrease.  From XRD patterns of the catalysts, formation of ordered Pt-Ti alloy phase was confirmed for Pt/1%Nb-TiOx, whereas no ordered alloy phase was observed for Pt/10%Nb-TiOx.  This fact indicates that higher Nb-content suppress the Pt-Ti alloy formation, which leads to lower ORR activity at Pt/Nb-TiOx catalysts.  In addition, without reducing treatment with laser irradiation, Pt/Nb-TiOx shows further lower ORR activity.  Alloy formation seems to be almost the same with the reduced catalysts so that this activity loss would be partly due to resistivity difference of the Nb-TiOx catalyst supports.

To examine the catalyst stability at high potentials, potential cycling test between 1.0 V and 1.5 V was conducted in 0.1 M HClO4 at 60°C.  CVs of Pt/1%Nb-TiOx with reducing treatment are fairly stable even after 5,000 cycles, which was similar stability with non-doped Pt/Ti4O7 catalyst [2].  On the other hands, the catalysts with higher Nb content showed much inferior CV stability.  Additional data including MEA performance/stability and further discussions will be presented at the meeting. 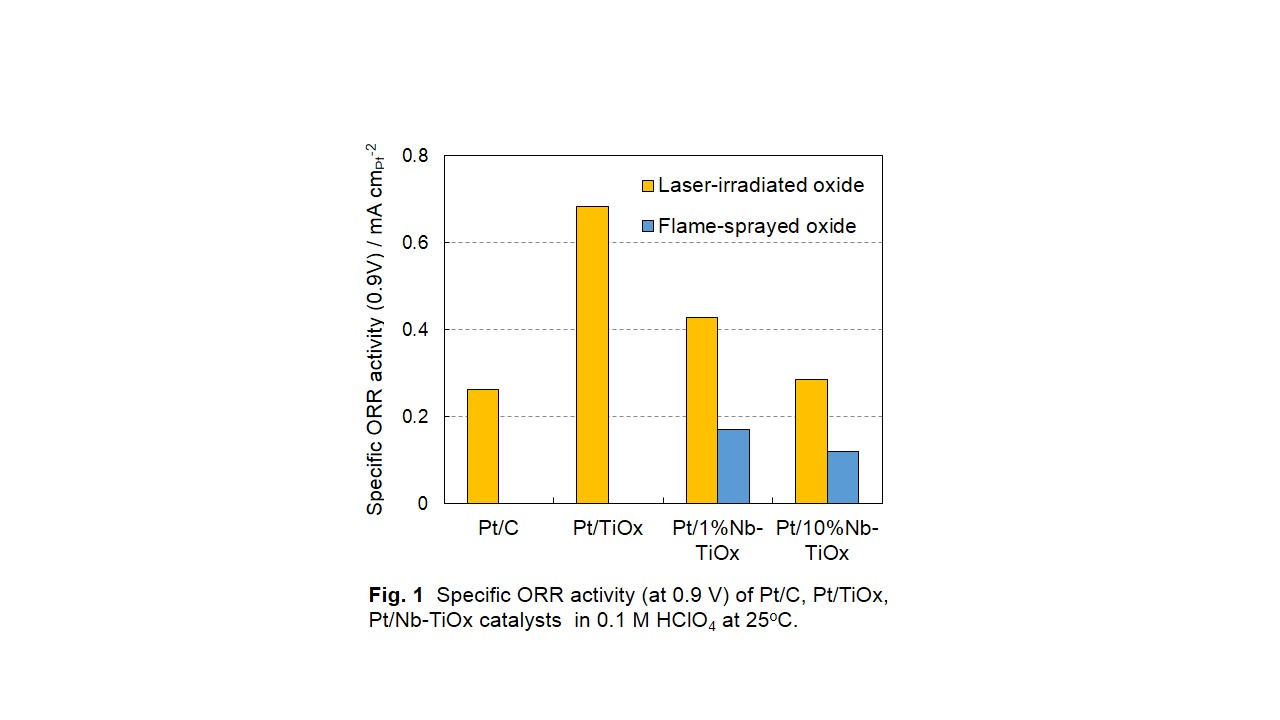