Expo Center, 1st Floor, Center and Right Foyers (Moon Palace Resort)
F. L. Bleken (Sintef Materials and Chemistry), A. Fossdal (SINTEF Materials and Chemistry), F. Vullum-Bruer (Department of Materials Science and Engineering, Norwegian University of Science and Technology), and O. M. Lřvvik (Sintef Materials and Chemistry)
Alternatives to Li-ion batteries are of increasing interest, mainly due to the ever increasing need for good and reliable rechargeable batteries for energy storage and delivery in a wide variety of applications, while recognizing that Li is a very limited resource. Mg ions are considered promising alternative charge carrier candidates in novel ion batteries due to the high theoretical volumetric capacity of Mg, its high abundance in the earth crust, and its stability for handling and electrode preparation processes despite high potential reactivity. However, replacing Li with Mg in conventional ion batteries is not straight forward, particularly due to the switch from monovalent to divalent ions. Changing the charge carrying ion imposes large changes on the chemical environment, thus providing the scientific community with a huge challenge in finding good anode and cathode materials, as well as electrolytes and container materials that all work together. The present work focuses on olivine-structured materials as potential cathodes, studied by theoretical methods. The work is carried out in close collaboration with experimental studies.

We will present results on a number of TMs in order to screen promising candidates from a thermodynamic and kinetic point of view. Some preliminary results are shown in Figure 1. Figure 1a shows that for MgTMSiO4 with TM = V, Mn and Fe, the formation of an intermediary MgxTMSiO4, x=0.25, 0.5 or 0.75, is stable with respect to the extremes with full or no magnesiation. Unit cell expansion during the uptake and release of Mg may be of crucial importance for long term stability of the final cathode. Figure 1b) shows that the maximum unit cell expansion from TMSiO4 to MgTMSiO4 is much more prominent for TM= Mn than TM = V or Fe.

Nudged elastic band (NEB) calculations for the diffusion of Mg between different sites in MgMnSiO4 are shown in Figure 1c and d. Figure 1c shows that moving Mg from to a neighbouring (empty) Mg site has a 1 eV barrier. It should be noted that although the unit cell contains 4 formula units, removing either of the four Mg atoms gives 4 equivalent Mg0.75MnSiO4. This is reflected in Figure 1c where the start and end points of the NEB path are at the same energy level. In the perfect MgMnSiO4 crystal Mg occupies sites denoted 4a, and Mn the sites denoted 4c. However, scrambling is possible, and Figure 1d shows the NEB path for Mg diffusing to an empty Mn (4c) site in the case of MgMn0.75SiO4. The 0.8 eV energy difference between end and start point indicates that empty 4c sites are thermodynamically unfavourable for MgMnSiO4 and that defects arising from Mn vacancies are easily reoccupied by Mg.

Figure 1 Preliminary results of calculations on MgTMSiO4 olivine materials as potential candidates for cathodes in Mg-ion batteries. (a) Reaction energies for x MgTMSiO4 + (1-x) TMSiO4 → MgxTMSiO4. (b) Maximum unit cell expansion during magnesiation.  NEB-path with diffusion energies when Mg diffuses from (c) one 4a to a neighbouring 4a position in Mg0.75MnSiO4 (d)  from a 4a to a 4c site in MgMn0.75SiO4. 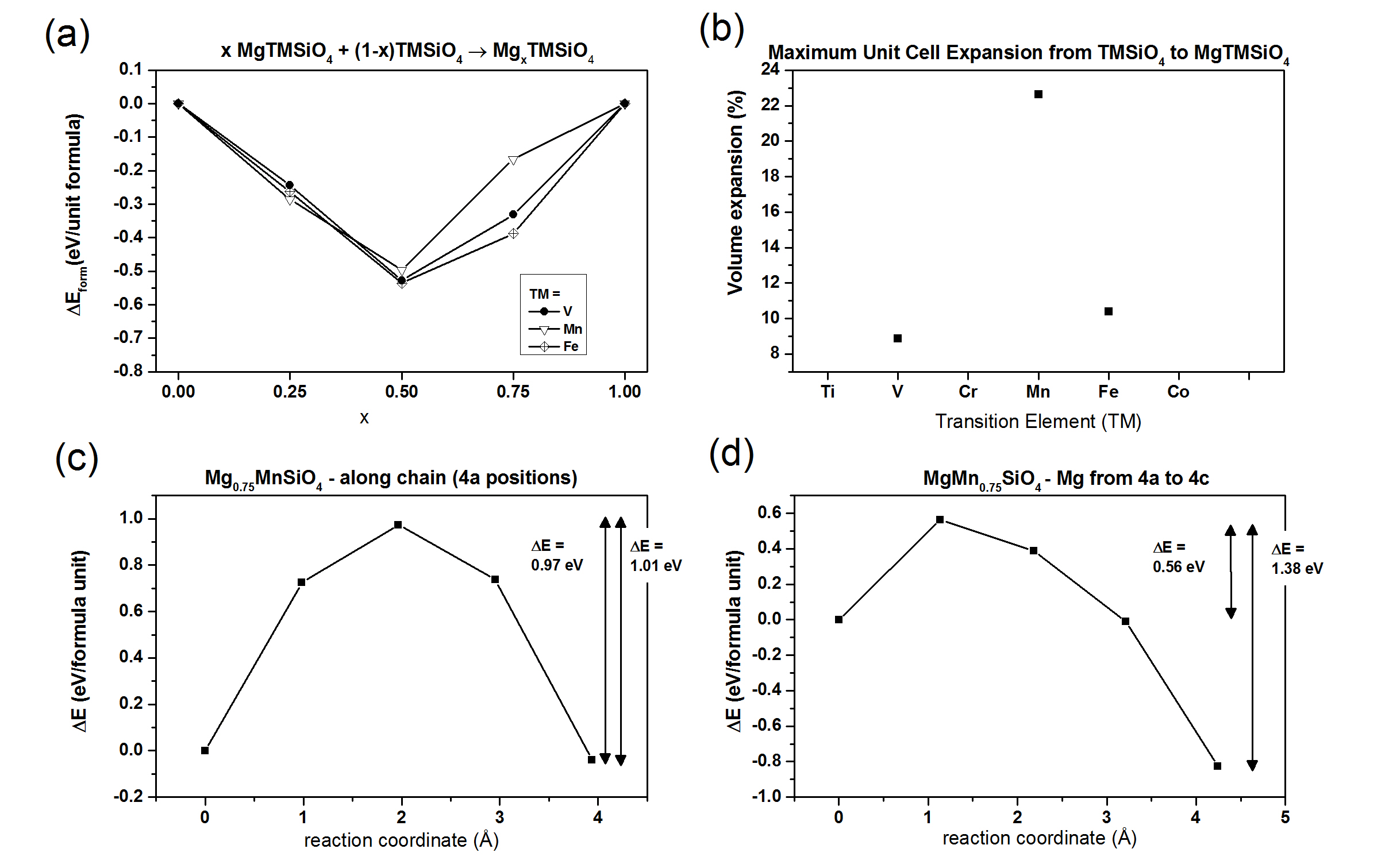