Sunrise, 2nd Floor, Galactic Ballroom 4 (Moon Palace Resort)
C. McGuire and D. G. Peters (Indiana University)
Mirex and its oxidized derivative decachloropentacyclo[5.3.0.02.6.03.9.04.8]decan-5-one (kepone) are both still widely used in much of the developing world, despite many dangers to the environment.  Although its global use is severely restricted, DDT and its natural degradation product, 1,1-bis-(4-chlorophenyl)-2,2-dichloroethene (DDE), are still persistent in the environment.  Because these pesticides exhibit low solubility in water, they accumulate in sediment layers in waterways and are often found in soils.  Stockpiles of these and other halogenated legacy pesticides have been accumulating around the world since their phase-out from use; Mexico, for example, had over 100,000 kg of DDT sequestered in 2009.1

In previous work, our laboratory investigated the direct and metal salen-catalyzed reduction of DDT at carbon cathodes; it was determined that all aliphatic chlorines can be cleaved, resulting in 4,4′-(ethene-1,1-diyl)bis(chlorobenzene) as the principal product.2   Up to the present time, little work has been conducted to show electrochemical reduction of the natural degradation product, DDE.  Furthermore, only one electrochemical study of mirex and kepone has been reported, which reveals partial dechlorination of both molecules at lead cathodes in a methanol solution.3  Electrochemical literature contains examples in which other persistent organohalogen pollutants are electrocatalytically reducible at silver cathodes, often with significant positive shifts in potentials in comparison with reductions at other electrodes.4  Recent work in our laboratory revealed that reduction of DDT at a silver cathode in dimethylformamide (DMF) results in the completely dechlorinated products, 1,1′-ethylidenebisbenzene and 1,1-diphenylethene.  In the work to be reported in this presentation, we expand upon these previous results by examining the direct reduction of DDE, mirex, and kepone at  silver cathodes in DMF as well as in DMF–water mixtures.

Our laboratory has previously characterized the cyclic voltammetric behavior of DDT at silver cathodes, and it has found that DDT undergoes a sequence of five reductions in DMF.  Similarly, it has recently been determined that DDE shows only four cathodic peaks when reduced at silver in DMF.  Preliminary cyclic voltammetric investigations of the reduction of kepone (shown in Figure 1) and mirex have focused on a comparison of their behavior at silver cathodes in DMF with their behavior in DMF–water mixtures.  Cyclic voltammograms for reduction of mirex and kepone show similar trends: reductions in DMF are characterized by a multitude of small peaks, whereas fewer well-defined peaks are seen in 9:1 DMF–water mixtures.  We conclude that scission of carbon–chlorine bonds proceeds more readily in the presence of an excess of proton donor.

Controlled-potential (bulk) electrolyses at silver mesh cathodes have been employed to study the extent of dechlorination of these persistant pollutants.  Catholytes from bulk electrolyses of DDT and DDE analyzed by means of GC and GC–MS contain mainly mixtures of completely dechlorinated products (1,1′-ethylidenebisbenzene and 1,1-diphenylethene).  Bulk electrolyses of mirex and kepone have also been conducted at potentials corresponding to their most negative cyclic voltammetric peaks, and product distributions have been determined with the aid of GC–MS.  A procedure based on the use of stripping analysis has been used to determine the extent of dechlorination of kepone and mirex.

1.  Commission for Environmental Cooperation. The Status of DDT in North America: Follow up to the North  American Regional Action Plan on Dichlorodiphenyltrichloroethane. 2010. http://www.cec.org/Storage/98/9743_QA1020a_NP_DDT_NARAP_report_Sep2010_en.pdf  (accessed March, 2013). 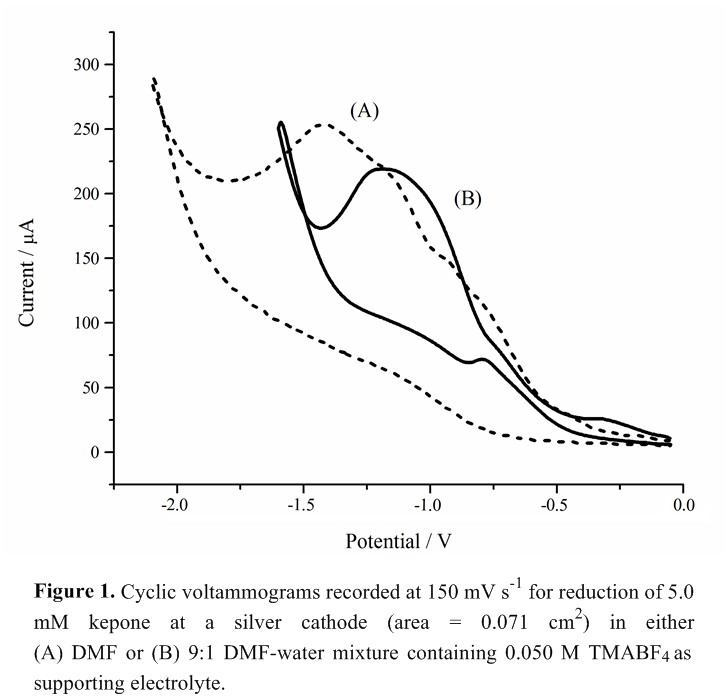