Sunrise, 2nd Floor, Star Ballroom 7 (Moon Palace Resort)
Y. Lu (Cornell University)
High energy and safe electrochemical storage are critical components in multiple emerging fields of technology where portability is a requirement for performance and large-scale deployment. From advanced robotics, autonomous aircraft, to hybrid electric vehicles, the number of technologies demanding advanced electrochemical storage solutions is rising. The rechargeable lithium ion battery (LIB) has received considerable attention because of its high operating voltages, low internal resistance and minimal memory effects. Unfortunately LIBs are currently operating close to their theoretical performance limits due to the relatively low capacity of the anode LiC6 and the lithiated cathode materials (LiCoO2 and LiFePO4) in widespread use. It has long been understood that a rechargeable lithium metal battery (LMB), which eschewed the use of a carbon host at the anode can lead to as much as a ten-fold improvement in anode storage capacity (from 360 mAh g-1 to 3860 mAh g-1) and would open up opportunities for high energy un-lithiated cathode materials such as sulfur and oxygen, among others. Together, these advances would lead to rechargeable batteries with step-change improvements in storage capacity relative to today’s state of the art LIBs.

A grand challenge in the field concerns the development of electrolytes, electrode, and battery systems configurations that prevent uneven electrodeposition of lithium and other metal anodes, and thereby eliminate dendrites at the nucleation step. It is understood that without significant breakthroughs in this area, the promise of LMBs, as well as of storage platforms based on more earth abundant metals such as Na and Al metal cannot be realized. Specifically, after repeated cycles of charge and discharge growing metal dendrites can bridge the inter-electrode space, producing internal short circuits in the cell. In a volatile electrolyte, ohmic heat generated by these shorts may lead to thermal runaway and catastrophic cell failure, which places obvious safety and performance limitations on the cells. The ohmic heat generated during a short-circuit may also locally melt dendrites to create regions of “orphaned” or electrically disconnected metal that results in a steady decrease in storage capacity as a battery is cycled. Lithium-ion batteries (LiB) are designed to remove these risks by hosting the lithium in a conductive carbon host at the anode. However, the small potential difference that separates lithium insertion into versus plating onto carbon can potentially lead to similar failure modes in an overcharged or too quickly charged LiB. Thus, the need for materials that prevent non-uniform electrodeposition of metals such as Li is also implicit in new fast charging LIB technology targeted for electric-drive vehicles.

We have investigated electrodeposition of lithium in simple liquid electrolytes such as propylene carbonate, ethylene carbonate and diethyl carbonate, and in nanoporous solids infused with liquid electrolytes. We find that simple liquid electrolytes reinforced with LiXA blends exhibit stable long-term cycling at room temperature, often with no signs of deposition instabilities over hundreds of cycles of charge and discharge and thousands of operating hours. We rationalize these observations with the help of surface energy data for the electrolyte/lithium interface and impedance analysis of the interface during different stages of cell operation.  Our findings provide support for an important recent theoretical prediction that the surface mobility of lithium is significantly enhanced in the presence of LiXA. 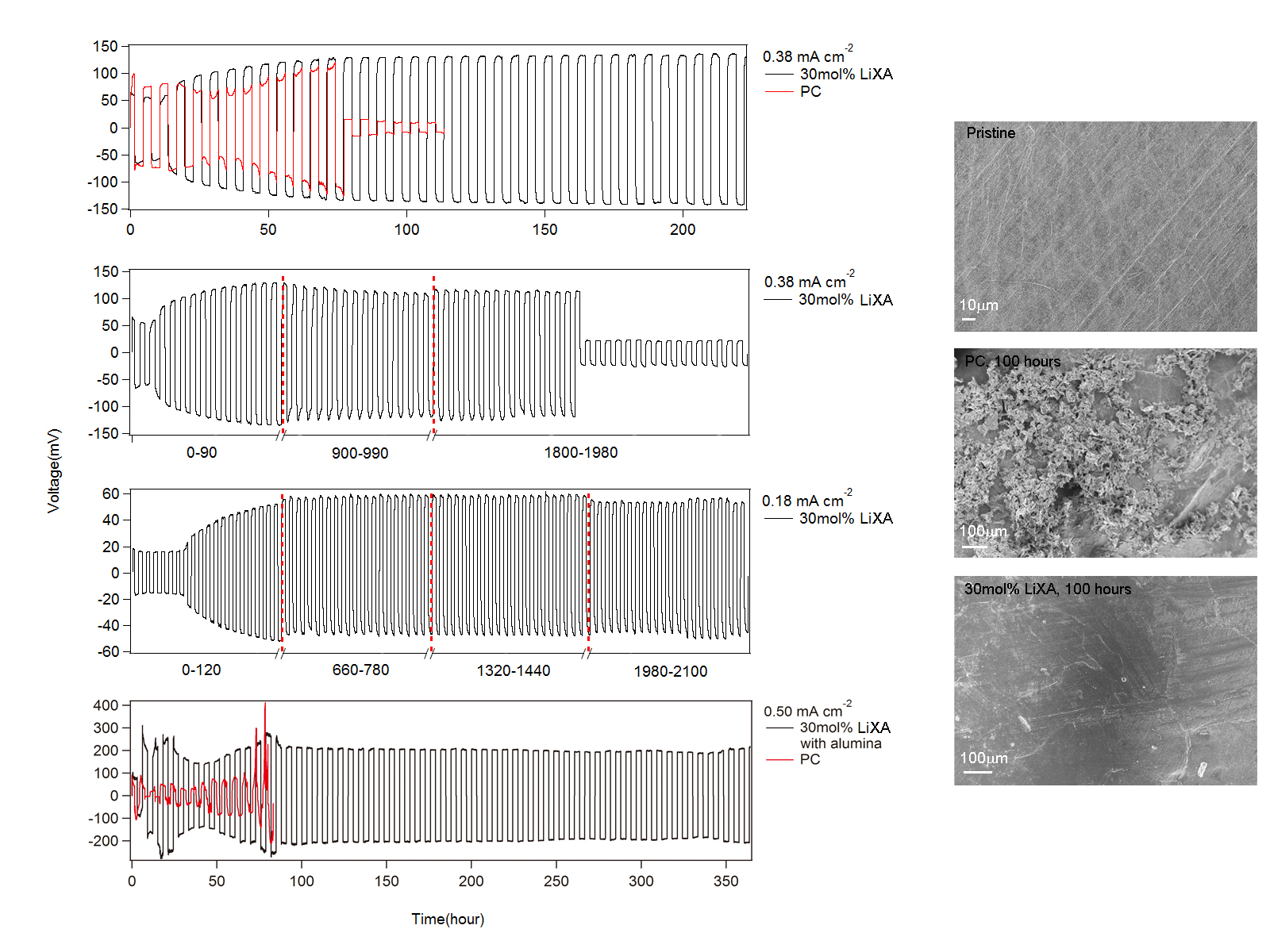