Expo Center, 1st Floor, Universal 3 (Moon Palace Resort)
C. Wang and C. L. Hussey (University of Mississippi)
Inorganic chloroaluminate molten salts are of interest as electrolytes for the high-rate plating of aluminum because of their high conductivity and low cost. Unfortunately, low-melting Lewis acidic inorganic chloroaluminate molten salts such as AlCl3-rich AlCl3-NaCl are problematic because of the loss of volatile AlCl3, which restricts their use to sealed systems. Most common Lewis neutral chloroaluminate salts that are based on a single alkali chloride salt, e.g., equimolar AlCl3-NaCl or NaAlCl4, are problematic as well because of their high melting points. However, Hjuler et al.1 described a complex mixture of inorganic haloaluminate salts, LiAlCl4-NaAlCl4-NaAlBr4-KAlCl4 (3:2:3:2) [or LiAlBr4-NaAlCl4-KAlCl4 (3:5:2)] with a melting point of only 86 oC.  This Lewis neutral salt was originally formulated for use as an electrolyte for rechargeable Al/molten salt/Ni3S2batteries.  The facile electrodeposition of aluminum from this salt was also demonstrated.

Any electrolyte solution that is used for the continuous electrodeposition or plating of aluminum normally requires an aluminum anode to resupply the aluminum species that is reduced at the cathode and lost from the solution during the plating process.  Much research has been directed at the mechanism of the plating reaction at the cathode in haloaluminate melts, but little attention has been directed to the reactions taking place at the anode.  As described in a now classical paper by Holleck and Giner,2passivation phenomena at the aluminum anode may ultimately limit the rate of the plating process in these molten salts as well as their use as battery electrolytes.

In this presentation, we describe the behavior of the aluminum anode in the LiAlCl4-NaAlCl4-NaAlBr4-KAlCl4 molten salt at 130 oC.  The anodization of Al in this melt is a complex process.  Figure 1 shows current - time plots recorded at an Al rotating disk electrode at different applied potentials, Eapp, versus the equilibrium potential, Eeq. (0 V versus Al).  As shown in the Levich plots in Fig. 2, for Eappup to 0.60 V, the anodization of Al is a mass transport-limited process according to the well-known reversible reaction:

where X = Cl + Br.  However, as Eapp is increased above this value, the current decreases significantly over a short time period, indicating that the amount of AlX4- supplied by mass transport is not sufficient to support the reaction in Eq. 1.  This results in passivation of the Al anode with AlX3(s) according to the reaction

Once the Al electrode develops a passive layer, the current reaches a steady-state value determined by the rate of AlX3(s) formation (Eq. 2) and dissolution according to the reaction

The Levich plot in Figure 2 suggests that this dissolution process is also mass transport limited.

This work was funded by the Strategic Environmental Research and Development Program (SERDP) through contract DE-AC05-00OR22725 to Oak Ridge National Laboratory with subcontract to the University of Mississippi. 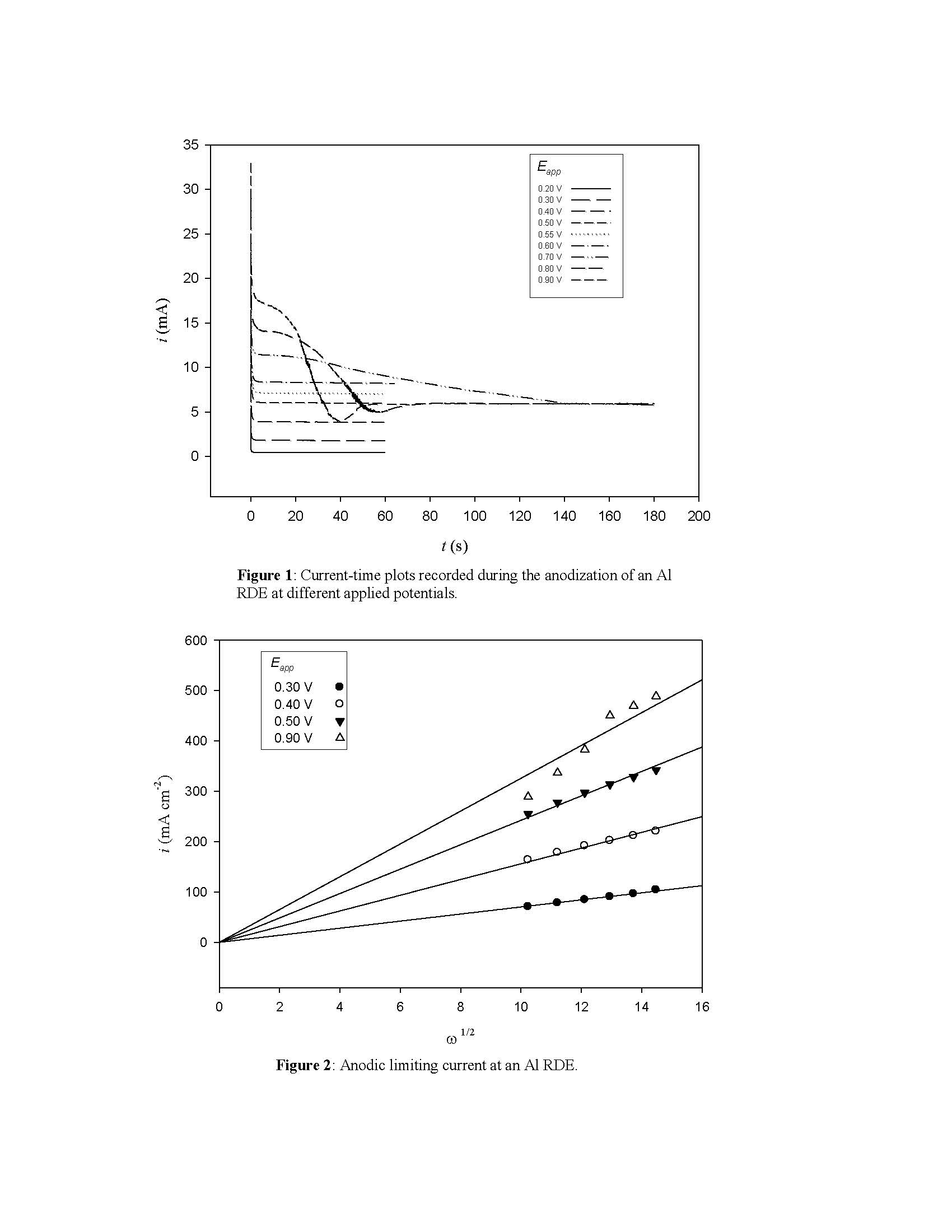