Sunrise, 2nd Floor, Jupiter 3 & 5 (Moon Palace Resort)
G. Samjeské, K. Higashi, S. Takao, K. Nagamatsu, K. Nagasawa, O. Sekizawa, T. Kaneko (Innovation Research Center for Fuel Cells, The University of Electro-Communications), T. Uruga (JASRI/SPring-8), and Y. Iwasawa (Innovation Research Center for Fuel Cells, The University of Electro-Communications)
The start-up and shut-down processes in polymer electrolyte fuel cell (PEFC) operations involve anode gas (fuel) mixing with air, which may diffuse into the Pt/C anode from either the anode gas outlet or the Pt/C cathode through the Nafion membrane. This causes a transient, short-lived anode-condition, in which a part of the anode catalyst layer is exposed to hydrogen while another is exposed to oxygen (air). The resulting mixed gas-condition leads to oxygen reduction reaction (ORR) at the oxygen-covered area of the anode, while hydrogen oxidation reaction takes place at the hydrogen-covered area of the anode, by the so called reverse current decay mechanism./1/

The electrolyte potential (potential of the Nafion layer) is drawn to negative values in the air-covered regions to facilitate the ORR on the anode, thus causing the potential difference between the Nafion layer and cathode catalyst layer on the corresponding areas of the cathode to increase up to 1.6 V. At the high potentials not only dissolution of Pt from the cathode catalyst but also oxidative corrosion of the carbon support take place.

We have measured the Pt/C cathode catalyst in PEFC during repeated fast anode-gas exchanges (AGEX) cycles by means of in-situ time-resolved XAFS, to study the structural and electronic transformations of Pt nanoparticles at the cathode caused by the AGEX cycles. The in situ XAFS and time-resolved XAFS techniques together with STEM-EDS provided new insights into the origin and mechanism for the Pt/C cathode catalyst degradation by the AGEX cycles. 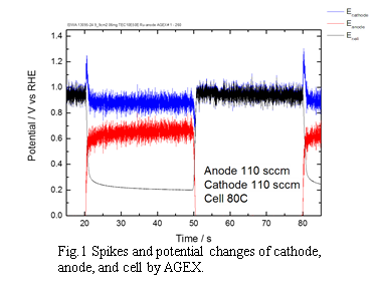