Expo Center, 1st Floor, Center and Right Foyers (Moon Palace Resort)
K. Shigyo (Mitsubishi Electric Corporation, Manufacturing Engineering Center) and S. Sakai (Mitsubishi Electric Corporation)
The use of light emitting diodes (LED) is rapidly expanding they have a long lifetime, low energy consumption level, and require only a small amount of spacing. LED devices are used in many products, such as electric light sources, signals, and sensors. With the recently rising demand for low energy consumption and slimming down of liquid crystal displays (LCD), white emitting LED devices are used as the light sources of a LCD’s backlight systems. LED devices are usually used as the LED packages, as shown in Figure 1. A LED device is mounted on a lead frame covered with Ag mirror film and connected with bonding wire. The LED device and lead frame are sealed with packaging (ceramic or epoxy resin) and resin containing phosphors. In the white emitting LED package, the LED device emits blue light that excites the phosphors in the resin. The phosphor emits yellow light, and the white light is generated from the mixture of the blue and yellow light.

The degradation mechanism of the LED package is still unclear, although several degradation models have been proposed. Many authors have pointed out that heat is the major factor for the degradation of the LED package. The general evaluation technique for determining the quality and reliability of LED packages measures the light intensity during continuous emissions under the rating current condition. Because of the long life and complex behavior of LED light emissions,  over 10 k hours is needed to test them to make sure they are sufficiently capable. In Figure 2, the difference between LED A and LED B can be distinguished after 8 k hours. However, it is difficult to ensure their quality and reliability within a short time period.

We propose a new evaluation technique that can distinguish the quality and reliability of LED packages within a short time frame. This technique has the ability to measure the change in function of LED packages taken from different noises. In this technique, the LED packages are exposed to five different types of complex stresses for a maximum of 500 hrs. After that, the relation between the current and light intensity of these LED packages is measured. The degradation level sensitivity of a LED can be improved by measuring the change in function (the relation between the current and light intensity) of a LED. The given noises are listed as follows.

Figure 3 shows the relations between the current and light intensity of LEDs A and B, respectively. The relations are measured initially and after being exposed to the five complex stresses for three LED packages. These figures show that by measuring their relations, we can judge the level of quality of each LED package within a short time period (within 1000 hrs). The level of quality of LEDpackages is quantified by using the S/N ratio proposed by G. Taguchi in the field of Quality Engineering. The S/N ratio is defined using the following formula [1].

In this formula, β is the regression coefficient of the relationship between the current and intensity, and σ2 is the regression error variance. An increase in the S/N ratio means that the variability of the LED package is decreased and/or the emitting efficiency of the LED package is improved. Then, a LED package with a large S/N ratio is determined to be more stable and/or has a higher level of efficiency than one with a smaller one. Table 1 itemizes the S/N ratios of LEDs A, B, and C. In the table, the quality of LED A is higher than that of LEDs B and C. In addition, this LED is the lowest one. This result corresponds with the results obtained by using the general evaluation technique over a long time period, as shown in Figure 2. 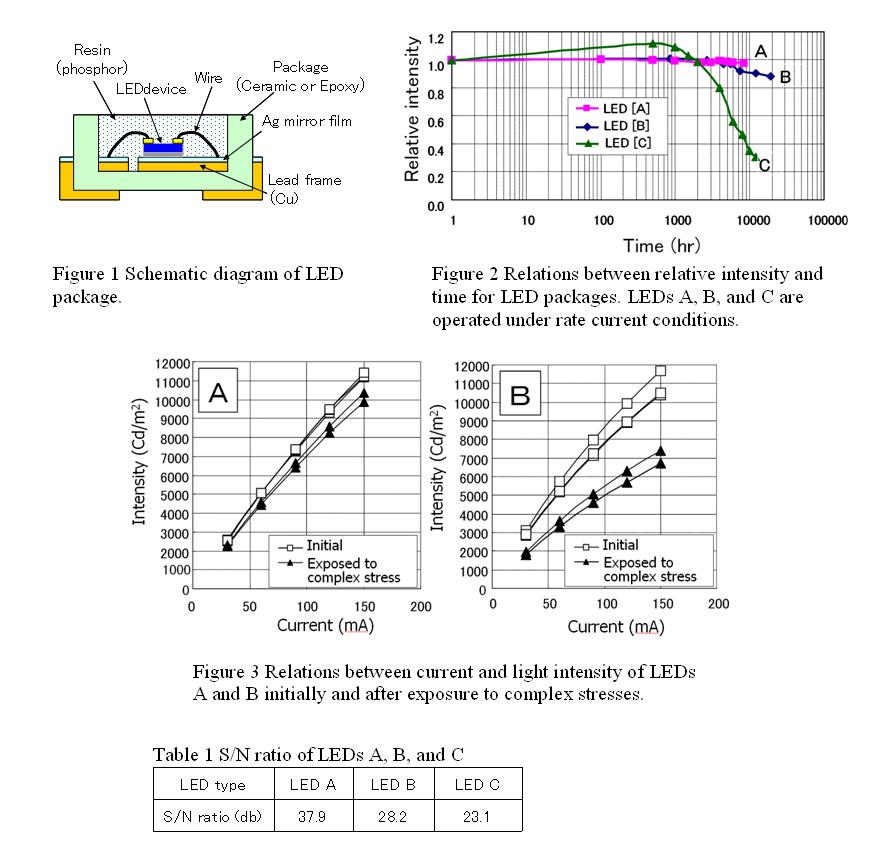