Solid oxide electrolysis cells (SOECs) are devices which can generate hydrogen from high temperature steam by electrolysis techniques. For a micro-tubular SOEC, a current collector position affects the temperature and the reactive current distributions, and these distributions affect performance and durability. Understanding the distributions is important, however, researching the distributions by only experimental methods is difficult because of thin components, small radius and high operating temperature. Therefore, combining the experiment and numerical analysis is better way to understand phenomena in the SOEC.

In this study, the latter method is mainly reported. the two-dimensional tubular model of micro-tubular SOEC based on heat, mass and electric charge transfers was developed. The results of numerical analysis were compared with experimental data of micro-tubular SOEC. In addition, the conditions of co-flow and counter-flow were calculated and compared for the temperature distributions. Here, the co-flow means electron current flow is in parallel with gas flow. The counter-flow means electron current flow face gas flow. In this report, the anode gas flow is in parallel with the cathode gas flow.

The anode electrode was mixed material of nickel (Ni) and yttrium stabilized zirconium (YSZ). The electrolyte was YSZ. The cathode electrode was mixed material of lanthanum strontium manganite (LSM) and YSZ. Current collectors were platinum (Pt). The thicknesses of anode electrode, electrolyte and cathode electrode were 200um, 20um and 20um, respectively. Supplied anode gas was mixed gas of hydrogen and steam (hydrogen/steam ratio = 1). Supplied cathode gas was air. The operating temperature was 1123K. Experiments for micro-tubular SOEC were carried out under the similarly conditions. 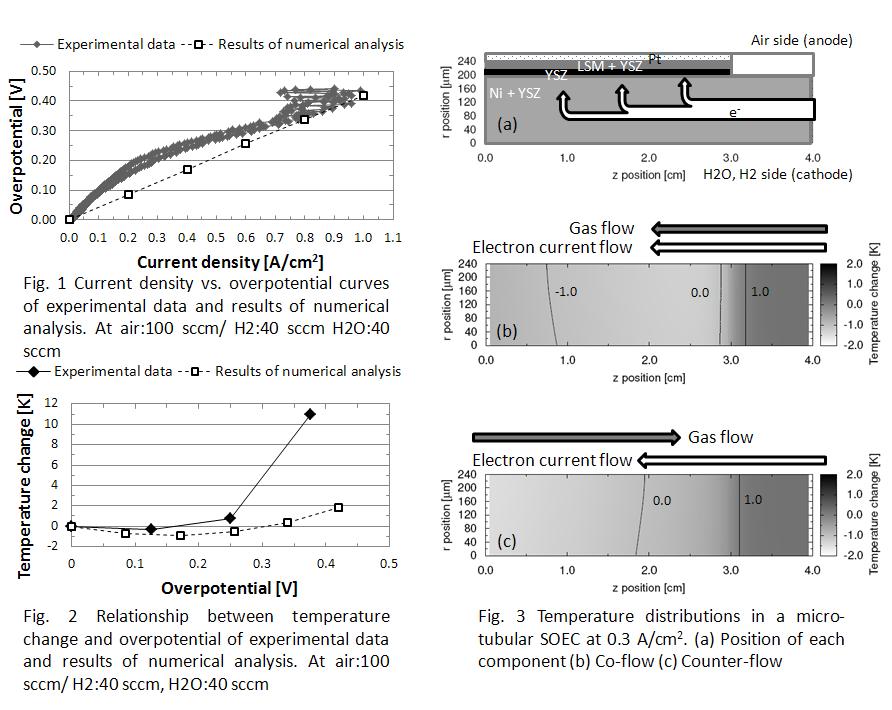