In order to increase renewable energy, less expensive large scale energy storage and transportation technology must be developed. Hydrogen related technologies are suitable for these applications. Energy carriers, such as organic hydrides, ammonia, and liquid hydrogen, have been investigated for large scale energy storage and transportation (1). Toluene/methylcyclohexane system is one of promising organic hydride because high energy density, easy to handle, and low toxicity. Recently, a new catalyst solved difficulty of dehydrogenation of methylcyclohexane, and practical use of the system is starting (2)

The total reaction of hydrogenation of toluene with renewable energy is

Conventional process of eq. [1] is the series reaction of water electrolysis and hydrogenation, and hydrogenation is exothermic, which is theoretical heat loss. One step electrochemical process with following reactions should improve energy conversion efficiency of hydrogenation.

In our pervious study, the eq. [2] of electrohydrogenation of toluene was catalyzed by PtRu/C on a membrane electrode assembly for polymer electrolyte fuel cells (3). However, a complete electrolyzer had not been developed.

In this study, the complete electrolyzer with IrO2based electrocatalyst coated Ti has been developed as a feasibility study of electrohydrogenation system.

0.5 mgcm-2 of PtRu (TEC61E54, Tanaka Kikinzoku Kogyo) was coated on a carbon paper (35BC, SGL) with Nafion dispersion (DE521, DuPont) as a cathode. The cathode was pressed on a perfluoroethylene sulfuric acid (PFSA) membrane (Nafion® 212CS, DuPont) for a cathode membrane assembly. A DSE® anode with IrO2based electrocatalyst is used for oxygen evolution.

Cell voltage was determined with 4 mVs-1of voltage sweep from 0.6 to 2.0 V for toluene hydrogenation. Upper limit cell voltage for water electrolysis was 2.3 V.

Internal resistance (iR) was determined with higher frequency intercept of AC impedance method in the cell voltage range from 1.0 to 2.5 V. Here, direct current was close to zero during iRmeasurement.

Figure 1 shows internal resistances and cell voltages as a function of current density fed toluene or water to cathode at 60oC with 4 mVs-1 of voltage sweep. Bold and thin lines for cell voltage are iR-free and measured, respectively. The internal resistances were around 3 Wcm2for both toluene and water fed to cathode; however, the resistance for toluene fed decreased with the increase of current density. In the most of industrial electrolysis, evaluated gas bubble between the membrane and the anode increases internal resistance. In this case, absorbed water should increase with current for toluene fed, and the resistance decreased.

Electrohydrogenation of toluene was stable and efficient electrolysis. Therefore, this electrolysis will become one of the best energy carrier technologies.

This research has been supported by the advanced low carbon technology research and development program of Japan science and technology agency. We appreciate person concerned. 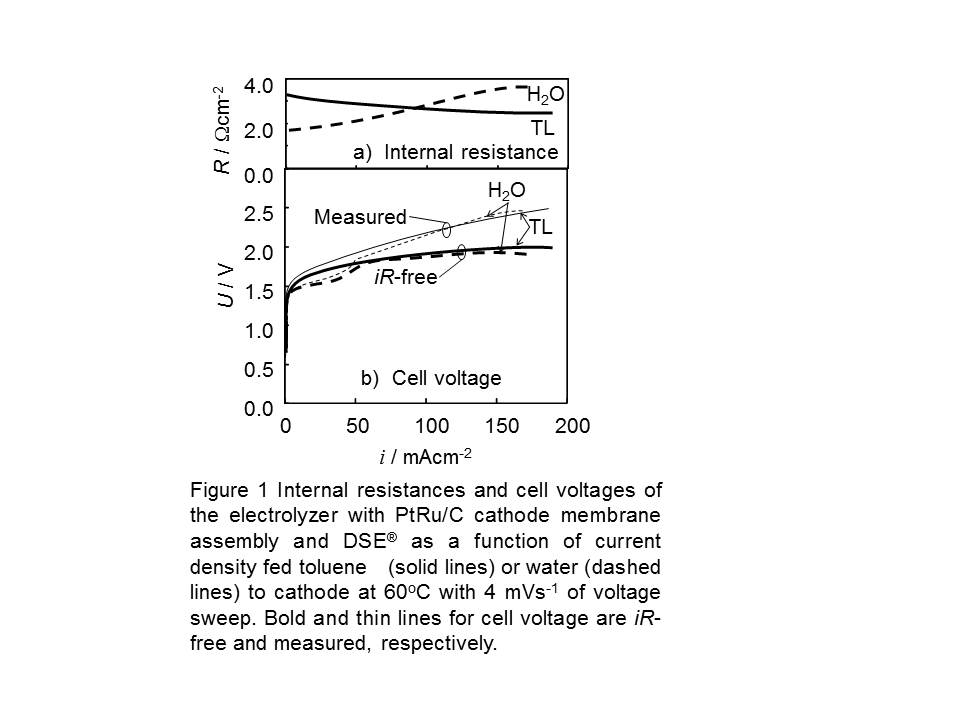