Expo Center, 1st Floor, Universal 14 (Moon Palace Resort)
M. E. M. Buan, N. Muthuswamy, I. Hjorth, D. Chen, and M. Rřnning (Norwegian University of Science and Technology)
N-doped carbon nanomaterials exhibit activity towards the oxygen reduction reaction (ORR), the cathode reaction in fuel cells [1-3]. These materials could thus be a cheap alternative to replace the high cost noble metals currently used. However, the ORR-activities reported so far have not been as high as for Pt. In addition, the nature of the active sites and the role of the transition metal used as carbon growth catalyst still remain unclear. Efforts should therefore be made to understand the active site structure in N-doped carbon nanomaterials so that the ORR-activity can be further improved. In the present work, a systematic evaluation of the ORR on N-doped carbon nanofibers (N-CNFs) is performed, and the possible active sites are explored by correlating the catalyst performance with results from XPS, S(T)EM and HRTEM.

Nitrogen-doped CNFs were grown over Fe supported on expandable graphite (Fe/EG) using a chemical vapor deposition method. The N-CNFs were treated with nitric acid (NCNF_HNO3) and annealed at 900⁰C (NCNF_900) in order to remove Fe and alter the O-functional groups on the surface. The ORR-activity was examined by linear sweep voltammetry in an acidic electrolyte. A rotating ring disk electrode was used as working electrode to enable the detection of H2O2 formation during the ORR. Elemental distribution on a single N-CNF was performed by EDX-analysis in S(T)EM.

Both pristine N-CNFs and post-treated N-CNFs showed oxygen reduction potentials around 0.9V which is close to the ORR potential of commercial Pt catalysts, see Table 1. However, the H2O2 production was lower for the acid treated N-CNFs. This could be attributed to the presence of O-functional groups on the surface favoring the 4-electron pathway for the ORR. Furthermore, EDX-analysis showed high concentrations of oxygen and iron at the tip of the N-CNFs, see Figure 1. This suggests that iron oxide is present in the N-CNFs and might be part of the active site for the ORR. To study more closely the effect of nitrogen and iron on the ORR-activity, pure CNFs (CNF) and NH3-treated Fe on EG (Fe/EG_NH3) were tested for the ORR. Interestingly, both samples showed ORR onset potentials around 0.8V. It therefore seems that both Fe and N are contributing to the ORR-activity of N-CNFs. Further investigations using highly sensitive characterization techniques such as HRTEM will be performed in order to fully understand the nature of the active sites for the ORR. 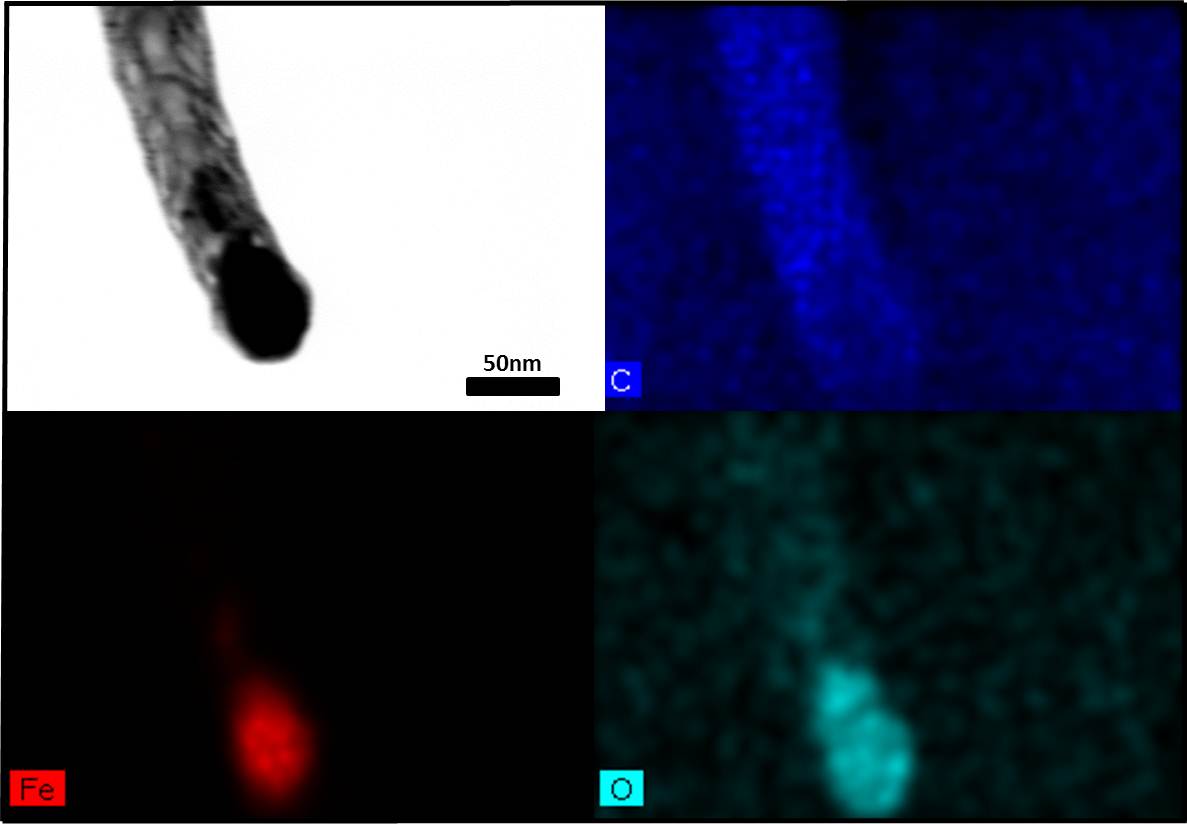