Expo Center, 1st Floor, Universal 12 (Moon Palace Resort)
J. W. Gallaway, A. Gaikwad, D. Turney, D. Desai, S. Banerjee (CUNY Energy Institute at the City College of New York), B. J. Hertzberg (Department of Mechanical & Aerospace Engineering, Princeton University), D. A. Steingart (Department of Mechanical and Aerospace Engineering, Princeton University), Y. C. K. Chen-Wiegart, K. Evans-Lutterodt, J. Wang, and C. Erdonmez (Brookhaven National Laboratory)
Secondary battery anodes based on zinc are desirable due to the energy density, water-compatibility, and inexpensive nature of zinc. Zinc anodes are found in many configurations, with two examples being 1) a continuous layer of zinc electrodeposited on a current collector and 2) a paste of zinc particles pressed on a current collector. Regardless of configuration, all zinc anodes face the challenge of dendrite formation, which can lead to failure of the cell.

We report in situ monitoring of dendrite growth on the micro- and nano-scale, using X-ray microdiffraction and transmission X-ray microscopy (TXM). These experiments were conducted at beamlines X13B and X8C at the National Synchrotron Light Source (NSLS). Two situations were studied: the effect of an additive on zinc electrodeposition, and the growth rate during cycling after initial dendrite formation.

Additive studies: Systems in which a continuous layer of zinc is electrodeposited on a current collector from a flowing electrolyte have received attention for use in large-scale applications. An example is the flow-assisted nickel-zinc battery reported by Ito and co-workers.1 These batteries suffer from progressively-formed dendrites, which have a mossy micro-morphology. It was found that trace amounts (3 ppm) of a bismuth additive in the electrolyte resulted in dramatically planarized zinc layers during cycling. Such a bismuth additive could eliminate the progressive, mossy-type dendrites found in flow-assisted zinc batteries. X-ray microdiffraction experiments allowed the composition of the metal layer to be tracked with 5-micron precision during cycling. It was found that the metal layer interface with the electrolyte was bismuth-rich, and that this enrichment took place during discharge. TXM experiments suggested that raised portions of the metal layer were electrodissolved first in the presence of bismuth.2

Dendrite growth rate studies: In a pasted zinc anode, dendrite formation may occur relatively quickly by development of a “hot spot” at the anode interface with the separator. The tip of a crystalline dendrite puncturing the separator experiences considerable current density, leading to a cell short. Using TXM a dendrite was electrodeposited, which displayed the expected hexagonal zinc morphology. This is shown in Figure 1. Subsequent vigorous electrodeposition localized the current distribution on the dendrite tip, allowing localized current density to be calculated.

Acknowledgment: This work was supported by the Laboratory Directed Research and Development Program of Brookhaven National Laboratory (LDRD-BNL) Under Contract No. DE-AC02-98CH 10866 with the U.S. Department of Energy.

Figure 1. (a) A zinc dendrite tip grown by electrodeposition from a flowing zincate electrolyte and imaged by transmission X-ray microscopy (TXM). Yellow box shows the region magnified in the following panels. (b)-(d) TXM images of the dendrite tip undergoing vigorous electrodeposition at times of 0, 1, and 3 s after the current was applied. Zinc branches 350 nm in thickness were resolved in situ during growth. 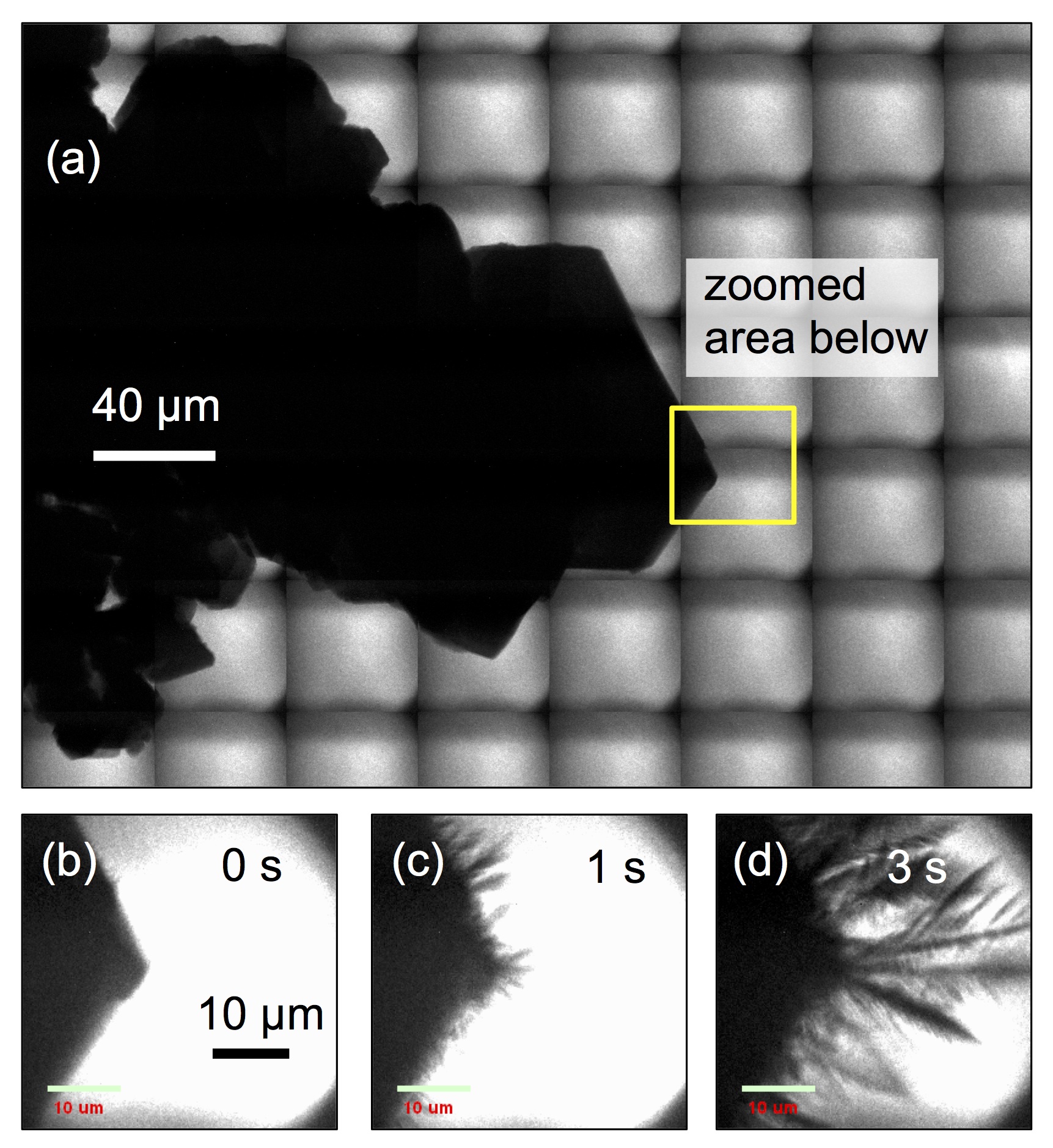