Sunrise, 2nd Floor, Jupiter 1 & 2 (Moon Palace Resort)
A. S. Alavijeh, R. MH Khorasany, Z. Nunn (Simon Fraser University), M. Lauritzen (Ballard Power Systems), and E. Kjeang (Simon Fraser University)
Increasing the lifetime and reliability of proton exchange membrane fuel cells (PEMFCs) is one of the main challenges facing the fuel cell industry. Under automotive operating conditions, the membrane in PEMFCs is subjected to chemical and mechanical degradation, which gradually leads to loss in performance and subsequent failure. The US Department of Energy (DOE) has developed standardized protocols for in-situ chemical and mechanical accelerated stress tests (ASTs) [1]. The decay in membrane properties under pure chemical, pure mechanical, and combined chemical – mechanical AST [2-4] were recently evaluated. In the area of mechanical membrane degradation, material fatigue is expected to dominate, and an ex-situ fatigue based AST technique was recently developed by our group [5]. The objective of the present work is to compare the action of the ex-situ fatigue AST to that of the more established in-situmechanical AST protocol. For this purpose, fatigue lifetime, failure modes, and decay in mechanical properties were investigated and compared for both AST techniques.

In-situ mechanical AST was conducted on a five-cell research-scale fuel cell stack by applying wet–dry cycles from 0% to 90% relative humidity under a modified DOE mechanical AST protocol. CCM samples were periodically extracted from the stack after certain numbers of AST cycles (every 4,000 cycles) and replaced by fresh cells. In order to investigate the formation of mechanical damage in the membrane, leak tests followed by a systematic microstructural study using scanning electron microscopy (SEM) were applied on the extracted samples. Post-mortem analysis on the degraded samples using an infrared camera showed traces of mechanical defects facilitating gas crossover through the membrane and leading to failure, as depicted in Figure 1. The decay in mechanical properties was evaluated through conducting tensile and expansion experiments on the degraded samples at different AST cycles, in accordance with our recently established CCM characterization procedures [6].

The ex-situ fatigue AST experiments, on the other hand, were applied on fresh CCM specimens utilizing fatigue stresses via a dynamic mechanical analyzer (DMA) equipped with an environmental chamber.  Systematic fatigue experiments in our group, proved the capability of cyclic loadings in order to benchmark the mechanical durability of the materials. It was observed that membrane fatigue life is a strong function of temperature and relative humidity [5]. Employing the outcomes of the baseline fatigue data, approximate CCM fatigue lifetimes were extrapolated and predicted at the desired test conditions. Depending on the total fatigue lifetime, fatigue experiments were interrupted at different fractions of the CCM lifetime in conjunction with the corresponding in-situ extractions. In a similar manner, tensile and expansion experiments were performed on ex-situ fatigue extracted specimens to evaluate the decay in mechanical properties under cyclic loading. The results of the two methods are comprehensively compared and utilized to shed light on the overall fundamental understanding of the pure mechanical membrane degradation mechanism and the associated CCM fatigue lifetime. The capabilities of the ex-situfatigue experiment as a rapid, inexpensive mechanical AST are discussed.

Figure 1. Formation of leak observed during the in-situmechanical AST. The bright region captured by an infrared camera indicates the main leak location near the inlet.

Acknowledgements:
This research was supported by Ballard Power Systems and the Natural Sciences and Engineering Research Council of Canada through an Automotive Partnership Canada grant. 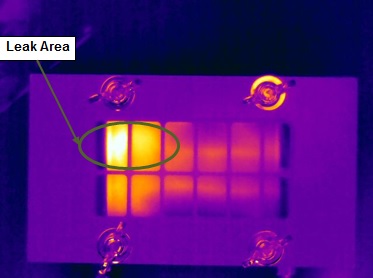