Expo Center, 1st Floor, Center and Right Foyers (Moon Palace Resort)
I. Herrmann-Geppert (Helmholtz-Zentrum Geesthacht), P. Bogdanoff (Helmholtz Zentrum Berlin, Institute for Solar Fuels), T. Emmler (Helmholtz-Zentrum Geesthacht), H. Gutzmann, F. Gärtner (Helmut-Schmidt-University), T. Dittrich (Helmholtz-Center Berlin, Institute for Heterogeneous Materials), and T. Klassen (Helmholtz-Zentrum Geesthacht)
Photoassisted water splitting for hydrogen generation requires the development of low cost, but highly efficient photoelectrodes. For the industrial hydrogen production with photoelectrochemical cells suitable catalysts and feasible photoelectrode preparation processes still need to be identified.
This contribution explores the potential of cold gas spraying (CGS) for the production of photoanodes employing semiconductors for the water oxidation reaction (OER). Conventional large area coating techniques usually employ wet chemical methods with subsequent calcination steps to obtain enhanced binding between the catalyst particles and the substrate. In the cold gas spraying process, particles are accelerated to high velocities by a pressurized gas. The nitrogen used as process gas is preheated and then expanded in a De Laval type nozzle. On impact with the substrate, the particles deform and break up and thus can build an efficient interface to the back contact.
For a first demonstration TiO2 aggregates delivered by EVONIK were probed for the preparation of TiO2 photoelectrodes. In photoelectrochemical experiments these cold gas sprayed TiO2 photoelectrodes showed seven times higher photocurrents in the photooxidation of water (at 1.23V(NHE)) than reference electrodes prepared by the established doctor blade technique. In systematic experiments it was observed that with increasing gas temperature in the coating process the obtained photocurrent is enhanced. The better performance can be mainly attributed to an improved bonding of the TiO2 particles to the substrate (back contact) due to their increased impact energy. Although the bulk characteristics of the particles remained unchanged incident photon to current efficiency (IPCE) and surface photovoltage measurements reveal the formation of surface-localized interband transitions at the TiO2 surface (1.2, 2 and 2.4 eV) during the CGS process. In order to study the influence of these defects on the photoreaction performance surface modification by plasma treatment is employed. For this structure-activity correlation analysis by Raman, XRD and XPS is performed.
From these initial experiments the preparation is extended to other potential metal oxides (e.g. WO3, Fe2O3 and BiVO4) for the photooxidation of water. Besides the relevant particle-substrate bonding and defect chemistry of the semiconductor layer due to the process, morphology investigation by SEM, gas sorption and 3D topography are considered for the optimization of the coating technique. 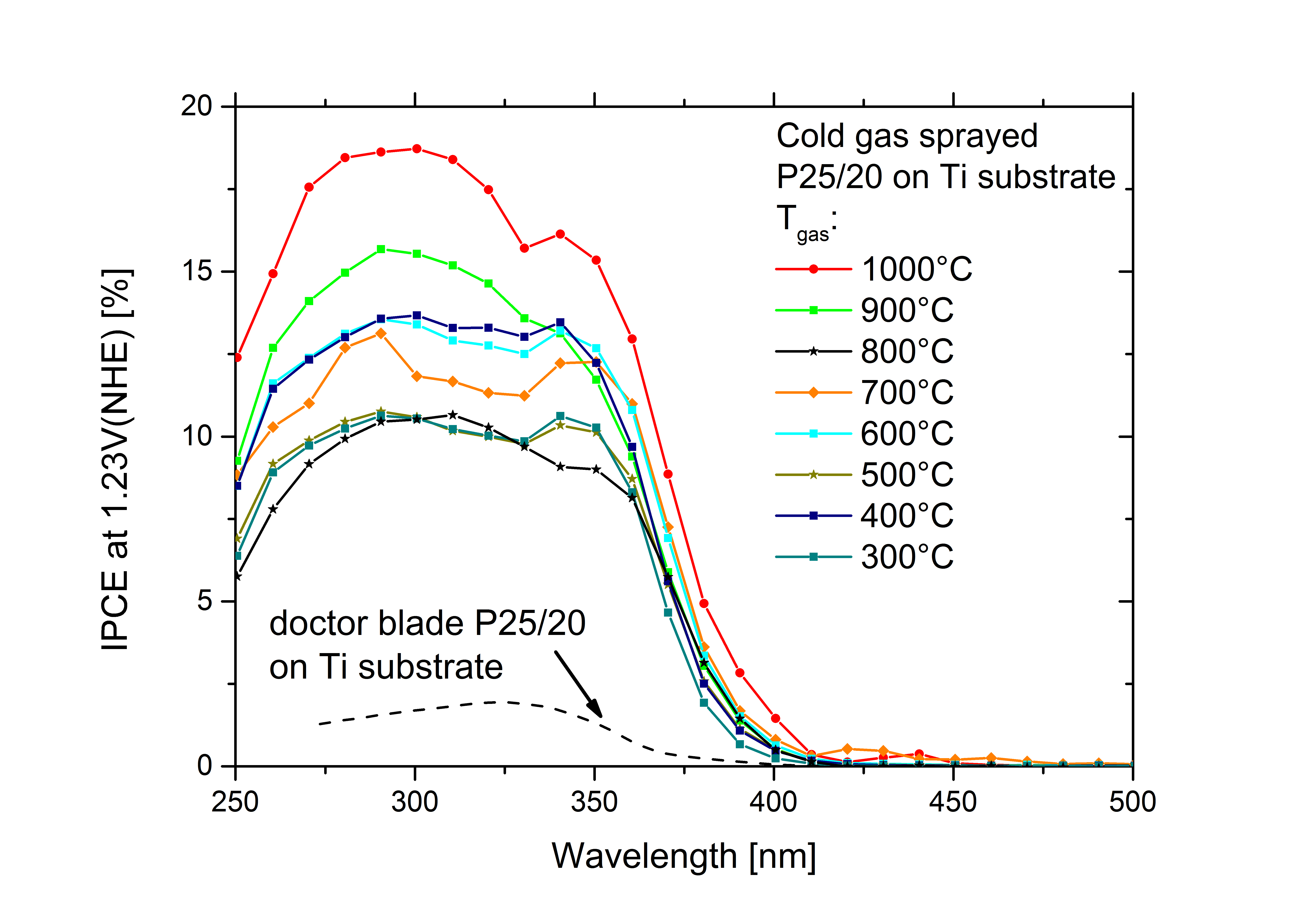