Expo Center, 1st Floor, Universal 3 (Moon Palace Resort)
V. A. Volkovich, A. B. Ivanov, A. A. Sobolev, B. D. Vasin (Ural Federal University), and T. R. Griffiths (Redston Trevor Consulting Ltd.)
Fused salts can be employed as working media for pyrochemical reprocessing of spent nuclear fuels (SNF) or for electrowinning metals that cannot be produced by conventional aqueous electrolysis.  Rare earth metals can be produced by electrolysis of fused salt electrolytes and some of theses elements also represent fission products formed in SNF.  The common oxidation state of the rare earth elements in molten chloride electrolytes is +3.  However a number of elements can form ions in the oxidation state +2 with Sm, Eu, Yb being the most stable and best known.  In the literature there is no information concerning Sm(II)/Sm(III) and Eu(II)/Eu(III) behavior in NaCl-2CsCl eutectic whilst the electrochemical properties of Yb(III)/Yb(II) couple in this melt have so far been studied only by potentiometry.  In the present work cyclic voltammetry, high temperature electronic absorption spectroscopy and spectroelectrochemistry were employed for studying the behavior of samarium, europium and ytterbium species in NaCl-2CsCl based melts between 823 and 1023 K.

Analysis of cyclic voltammograms showed that Ln(III)/Ln(II) reduction/oxidation is an one-electron diffusion controlled reversible process.  Diffusion coefficients of LnCl63-species (Ln = Sm, Eu, Yb) were determined in the studied temperature range and are described by the following equations:

Gibbs free energy change of the formation of LnCl3 from LnCl2 in NaCl-2CsCl based melts is described by the following equations:

the equilibrium constants can be expressed by the following equations:

A series of spectroelectrochemical experiments was performed to study potentiostatic reduction of Ln(III) ions.  The concentration changes of LnCl63-species in the melt were followed by recording the absorption spectra.  For all three elements studied the absorption related to Ln(III) ions decreased as the electrolysis progressed and the example of the spectra recorded in ytterbium containing melts is presented in Fig. 1.  No new obvious peaks that could be attributed to Yb(II) species were formed but the absorption below 600 nm increased.  Changes of the absorption of Yb(III) ions showed essentially linear dependence on the amount of electricity passed during the electrolysis, Fig. 2.  Analysis of the melt after the electrolysis showed that Yb concentration in the melt remained essentially unchanged and the mean oxidation state of ytterbium decreased to 2.83.  Diffuse reflectance spectrum of the quenched melt contained additional peaks between 350-450 nm, Fig. 3.

Additional spectroscopy experiments were performed on reduction of Sm(III), Eu(III) and Yb(III) species in NaCl-2CsCl melts using metallic zirconium.  In this case again the concentration of Ln(III) species in the melt and the mean oxidation state of Ln ions decreased with time. 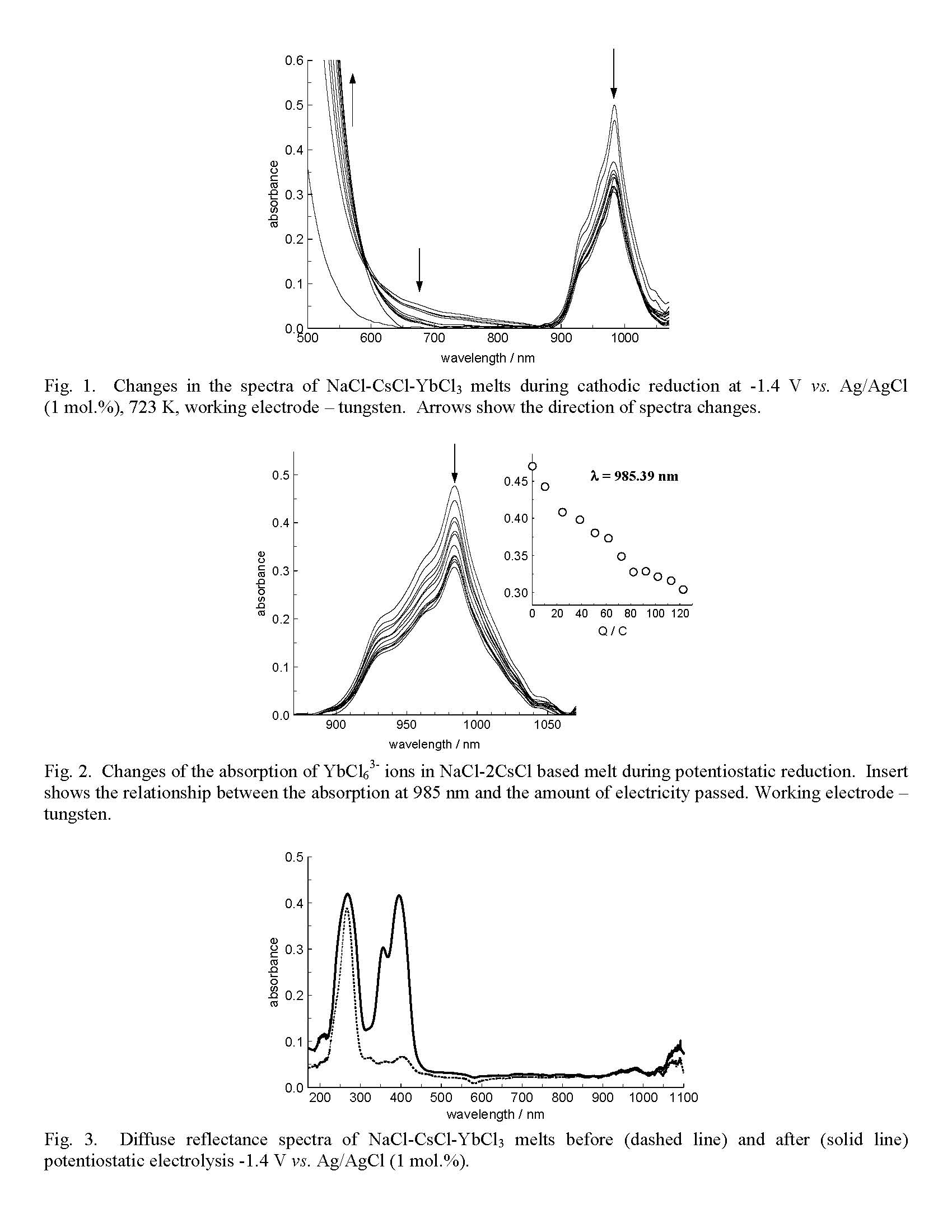