Expo Center, 1st Floor, Center and Right Foyers (Moon Palace Resort)
A. Ulvestad (University of Oslo, Institute for Energy Technology), M. Kirkengen, and J. P. Mæhlen (Institute for Energy Technology)
Silicon has proven to have a great potential as anode material in lithium-ion batteries due to its high theoretical electrochemical capacity. However, silicon anodes deteriorate quickly during cyclic charging and discharging, rendering them useless in only a few cycles [1]. This has been attributed to the stresses induced by the large volume change of the material during cycling. Numerous attempts have been made to reduce these stresses, e.g. by using nanoparticles, nanorods, nanowires, thin films and porous structures, with a varying degree of success [2, 3]. While using finely structured materials aids in the intercalation of lithium by reducing the necessary diffusion distance, it also has the unfortunate effect of greatly increasing the specific surface area of the silicon. When using nano-sized materials, silicon’s ability to form a thin and stable solid electrolyte interphase (SEI) therefore becomes increasingly important. There are a number of factors that have a large influence on the SEI formation, making the process notoriously difficult to analyze, but also makes it possible to manipulate. Coating silicon with different nitrides and oxides, e.g. TiN and TiO, have previously been shown to enhance the cycling stability and Coulombic efficiency of the material [4, 5]. In this project the effect of coating the surface of silicon thin films with a thin (< 4-5 nm) layer of silicon nitride is investigated, as well as the effect of varying the stoichiometry of the silicon nitride. By itself silicon nitride has been shown to function as a conversion electrode material, forming elemental silicon and lithium nitride during the initial cycle, with thin films exhibiting capacities of up to 1800 mAh/g [6].

40 nm silicon thin films were deposited by PECVD on copper foil using silane as precursor. The nitride was formed by addition of ammonia to the gas flow in the late stages of the deposition, and different stoichiometries were obtained by changing the ratio of these gases. By varying the flow rate of ammonia, coatings with four different compositions were made; pure silicon (A), stoichiometric Si3N4(D) and two intermediate compositions (B and C). Three electrodes were punched from each of the resulting films and mounted in coin cells with lithium metal counter electrodes and cycled at a current rate of C/3 for 150 cycles. During cycling, all the cells exhibited an initial increase in capacity, peaking at close-to-theoretical capacity within 10-40 cycles before beginning a slow decline. The average charge capacity for each series after 50, 100 and 150 cycles is presented in the figure, showing that the capacity retention increases with increasing nitrogen content for series A, B and C, and then decreases for series D. This indicates that a nitrogen coating has a positive effect on the deterioration mechanisms of the electrode, and that this effect increases with increasing nitrogen content of the coating, as long as a stoichiometric nitride is not formed. 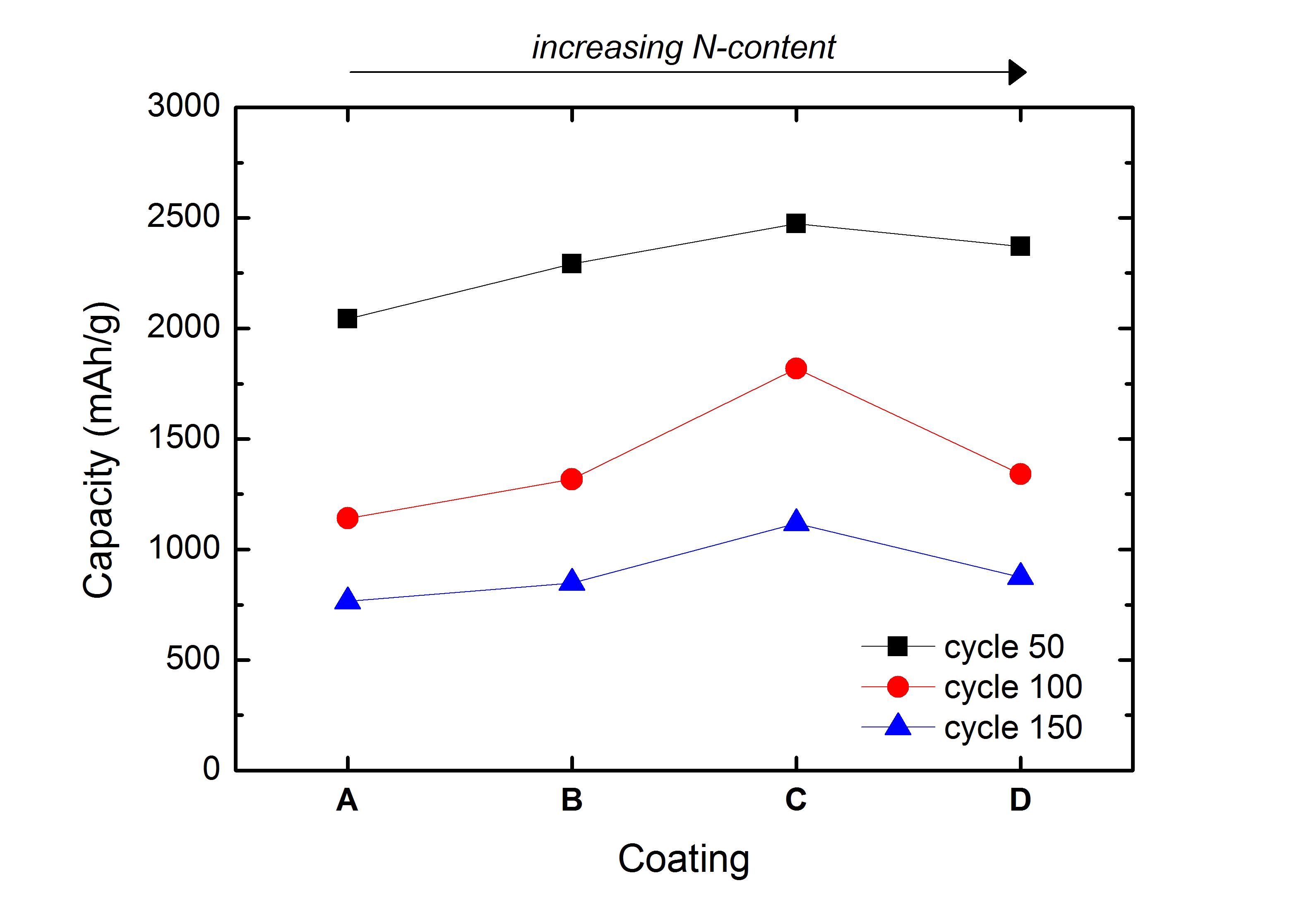