Development of non-noble metal cathodes as alternative materials of platinum is required for practical application of PEFCs. We have focused on the oxide-based compounds of group 4 and 5 metals. The oxidized carbonitrides of tantalum, niobium, zirconium and titanium have high catalytic activity for the oxygen reduction reaction (ORR) in acidic solution [1-3]. The zirconium oxide-based electrocatalysts (Zr-CNOs) made from oxy-zirconium phthalocyanines (ZrOPc) with heat treatment under low oxygen partial pressure showed higher activity than the carbonitride driven catalysts with smaller particle size of oxides [4]. However, further enhancement of the catalytic activity with improvement dispersion of oxide on carbon support is needed.

In this study, the effect of kind of solvent in impregnation preparation for the dispersion of starting material on carbon support has been investigated to improve the ORR activity of zirconium oxide-based compounds.

Oxy-zirconium phthalocyanine (ZrOPc) is used as a staring material. The ZrOPc and multi-walled carbon nanotube (MWCNT) as a support were dispersed into an organic solvent using ultrasonic homogenizer. The organic solvent was N-methylpyrrolidone (NMP) or tetrahydrofuran (THF). The dispersion was stirred overnight, and then evaporated to deposit the ZrOPc on the MWCNT. The MWCNT supported ZrOPc was oxidized by rotary electrical furnace at 900oC in 0.05%O2 + 2%H2/N2 for several hours.

All electrochemical measurements were performed in 0.1 mol dm-3 H2SO4 at 30oC with a 3-electrode cell. A reversible hydrogen electrode (RHE) and a glassy carbon plate were used as a reference and a counter electrode, respectively. In order to evaluate the catalytic activity of the ORR, slow scan voltammetry was performed with a scan rate of 5 mV s-1 from 0.2 to 1.2 V vs. RHE under O2 and N2 atmosphere. The ORR current density (iORR) which based on the mass of the whole catalyst included the carbon support was the difference between the current density under oxygen and nitrogen. The current density of the ORR at the potential of 0.85 V was defined as iORR@0.85V to evaluate the catalytic activity.

Figure 1 shows the comparison of the potential – ORR current density curves for the Zr-CNO prepared with THF (Zr-CNO(THF)) and with NMP (Zr-CNO(NMP)) which were oxidized for 300 min. The iORR@0.85V of  Zr-CNO(THF) was two time larger than that of Zr-CNO(NMP).

The authors thank Dainichiseika Color & Chemicals Mfg.Co., Ltd. for supply of the ZrOPc, and the New Energy and Industrial Technology Development Organization (NEDO) for financial support. 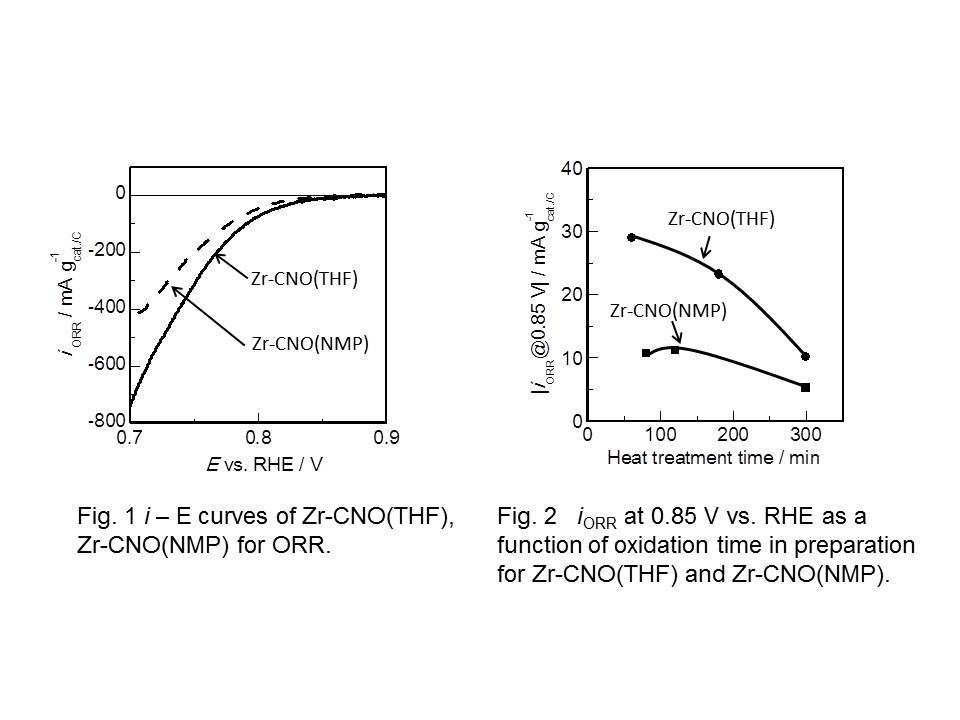