Sunrise, 2nd Floor, Galactic Ballroom 1 (Moon Palace Resort)
L. Ma and L. A. Archer (Cornell University)
A rechargeable battery that employs sulfur at the cathode and a metal (e.g. Li, Na, Mg or Al) at the anode provides perhaps the most promising path to a solid-state electrochemical storage device capable of high charge storage capacity. It is now understood that the dissolution of long-chain lithium polysulfides (Li2Sx, 2 < x < 8) into the electrolyte and the shuttling of polysulfides between cathode and anode has hindered the development of Li-S battery[1].

Researchers have proposed different methods to prevent polysulfide dissolution and shuttling in Li-S batteries. Many of the most successful approaches focus on physically restraining polysulfide dissolution by using barrier materials, including micro- and mesoporous carbon as capsules for sulfur[2], or by incorporating sulfur into carbon nanotubes[3] and graphene/graphene oxide sheets[4]. It is understood, however, that because the barrier to Li2Sx dissolution in the electrolyte is kinetic, polysulfides physically trapped in the meso- or nanopores of a carbon host will eventually leach into the electrolyte leading to premature cell failure.

In our work, we have developed a novel class of molecular sorbents for sulfur cathodes, which take advantage of strong lithium-nitrogen and lithium-chlorine interactions to sequester lithium polysulfides in the cathode. Additionally, the sorbent species are designed with anchoring groups (silane) such that they can cross-link within the cathode and bind to the surface of carbon (Figure 1).

Beginning with density-functional calculations of the structure and interactions of a generic lithium polysulfide species with nitrile and imidazolium containing molecules, we show that the Li2Sx entrapment by our method is of thermodynamic origin and persists via strong lithium-electrophile interactions. The interaction is also confirmed by FTIR, ICP-AES and other techniques.

Application of the concept to lithium-sulfur batteries leads to cells with potential profiles (Figure 2) which show no noticeable changes even after 50 cycles, while the one without sorbent already show noticeable changes in peak positions and current amplitudes by the 10thcycle. As an illustration of the effectiveness of the tethered sorbents, it is found that as little as 2w% of a nitrile-rich molecular species can increase the storage capacity of the sulfur cathode from effectively 100 mAh/g to at least 750 mAh/g after 100 charge/discharge cycles at a rate of 1C.

Our approach circumvents the need to apply coatings to the carbon or for thermal infusion of the sulfur into a porous carbon host. Preliminary thermodynamic analysis suggests that the method can also be used with oxygen-, chlorine-, fluorine-, and phosphorous-rich molecules. We expect that future results will be presented in the talk elaborating on the relative effectiveness of additives species based on each of these molecules for preventing polysulfide loss in lithium-sulfur battery. 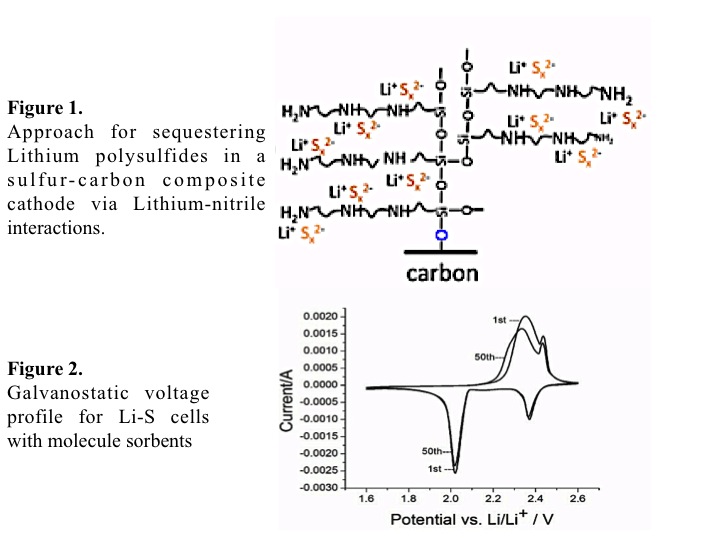