Expo Center, 1st Floor, Center and Right Foyers (Moon Palace Resort)
M. González-Perea, V. Dorantes-García, M. M. Dávila-Jiménez, and M. D. L. P. Elizalde-González (Universidad Autónoma de Puebla)
The oxidative and reductive desulfurization using electrochemical techniques has attracted much attention in the last decade because mild temperature and conditions are needed [1, 2]. It is known that the dibenzothiophene (DBT) can be progressively oxidized to a sulfoxide dibenzothiophene (DBTO) and dibenzothiophene sulfone (DBTO2).  However, the electrochemical oxidation and reduction DBTO2 in a liquid-liquid two-phase system of aqueous NaF/acetonitrile has not been reported.  The analysis by Fourier Transformed Infrared Spectroscopy (FTIR) showed partial removal of sulfur from DBTO2 placed in the electrolytic medium at 18.6 ppm or 108 ppm. The FTIR spectrum of the samples diluted in KBr after cathodic electrolysis at -8.0 V on Pt or Ti as cathode and Pt as anode in an undivided cell showed the absence of the characteristic bands of DBTO2: 1288 cm-1, 1166 cm-1 and 758 cm-1. This suggests a transformation of  DBTO2 with the electrochemical treatment (Fig. 1). The oxidation and reduction products of DBTO2 were analyzed by GC-MS and LC-MS.

Figure 1 FTIR spectra of DBTO2 before electrochemical treatment (a) and after cathodic treatment using Pt electrode (b and c). IR spectra of the acetonitrile (b) and the aqueous (c) phases. 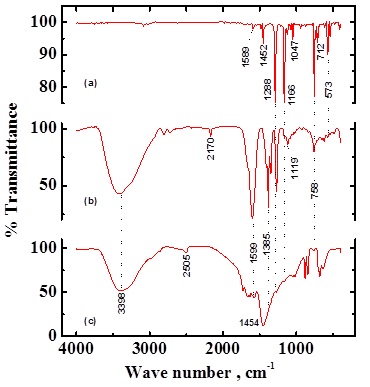