Expo Center, 1st Floor, Universal 3 (Moon Palace Resort)
L. H. Chou and C. L. Hussey (University of Mississippi)
Aluminum is a widely used material for corrosion resistant coatings.  From a thermodynamic perspective, it is a very active metal.  However, its excellent corrosion resistance stems from the formation of a robust, self-healing ~50 nm thick barrier film of Al2O3, which is formed spontaneously upon exposure to air at ambient temperature. Unfortunately, it is established that aluminum cannot be plated from aqueous solutions under normal conditions because hydrogen is evolved before most Al(III) species are reduced to Al.  A number of commercial Al plating processes have been developed.  Typically, these processes are based on pyrophoric mixtures of AlCl3 or AlBr3 with LiAlH4 dissolved in suitable organic solvents, such as ethers or mixtures of substituted benzenes.

The first report in which a room-temperature haloaluminate ionic liquid was used to plate Al appeared in 1948.1  Although moisture-sensitive themselves, such ionic liquids, particularly those based on mixtures of AlCl3 and quaternary ammonium chloride salts, have many safety and convenience advantages over the currently used commercial Al plating baths.  In this work, we report the pulsed-current plating of Al on steel substrates from the Lewis acidic AlCl3-1-ethyl-3-methylimidazolium chloride (EtMeImCl) ionic liquid with and without organic co-solvents.  Compared to DC methods, pulsed-current techniques can produce electrodeposited metals with smaller grain size and greater brightness, as well as less internal stress and correspondingly greater corrosion resistance.

Some preliminary results for Al films electrodeposited on steel from this ionic liquid are shown in Figs. 1 and 2.  The surface morphology and corrosion resistance of these films were interrogated with optical microscopy and electrochemical impedance spectroscopy (EIS) in aqueous NaCl, respectively.  Micrographs of typical Al electrodeposits (Fig. 1) indicate that their surface morphologies changed significantly with changes in ton and toff.  For example, the grain size of the Al film prepared with ton = 0.25 s is much smaller than that for deposits prepared with ton =1 s. Figure 2 shows complex plane impedance plots resulting from EIS experiments.  These plots show at least one time constant.  A circuit model for an electrode coated with an inert porous layer2 was fitted to the data in Fig. 2 to extract information about the pore resistance (Rp) of the coating.  The pore resistance reflects the corrosion resistance of the electrodeposited films.  Figure 2 shows that the best results were obtained for ton = 0.25 s and toff = 0.50 s in agreement with the results obtained by microscopy.  It was generally found that films with the best corrosion resistance were obtained with smaller values of ton.  Optimization of the parameters for the pulse plating of Al will be discussed with respect to the surface structure, grain size, corrosion resistance, and brightness of the deposits.

This work was funded by the Strategic Environmental research and Development Program (SERDP) through contract DE-AC05-00OR22725 to Oak Ridge National Laboratory. 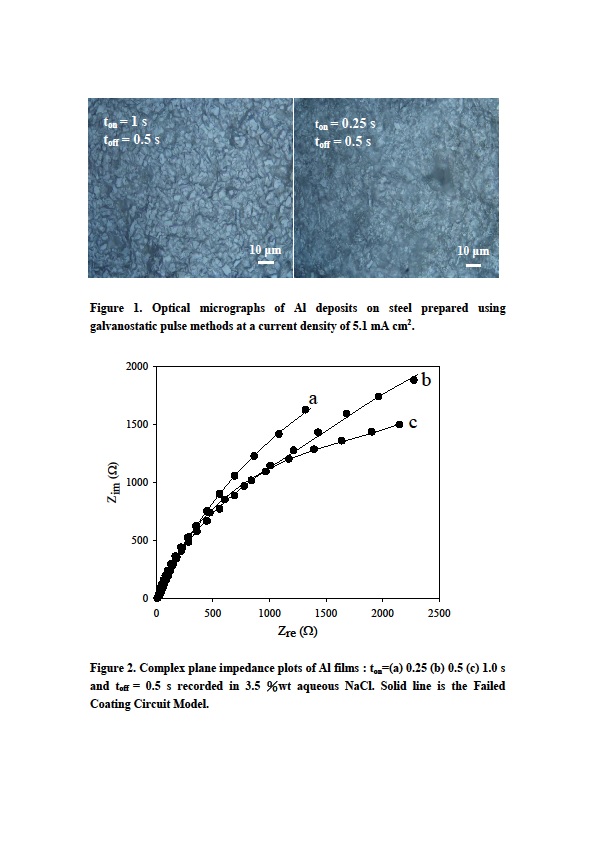