LiNi0.5Mn1.5O4 (LNMO) spinel is a promising cathode material with high voltage for lithium ion batteries because of its high energy density. However capacity of LNMO/graphite cell fades during cycles and high temperature storage. The capacity fading of LNMO cell was explained by transition metal dissolution and active lithium ion loss through continuous solid-electrolyte interface (SEI) formation prompted by transition metal on the graphite surface [1]. Many additives which make stable SEI on the electrode surface were proposed to avoid the capacity fading [2-5].

In this work, we investigated vinyl cyclosiloxane derivatives as additives to improve the durability of LNMO/graphite batteries with high voltage.

Electrolyte additives were evaluated with coin cell of LNMO/graphite. Fig. 1 shows the chemical structure of 2,4,6,8-tetramethyl-2,4,6,8-tetravinylcyclotetrasiloxane (MVCTS) as typical vinyl cyclosiloxane. As a base electrolyte, 1M LiPF6 was dissolved in a mixture of ethylene carbonate (EC), ethyl methyl carbonate (EMC) and dimethyl carbonate (DMC) (3/4/3 by volume). The coin cells were cycled at 1 C rate between 3.5 V and 4.9 V at 60°C. The electrodes after cycling were analyzed by X-ray photoelectron spectroscopy (XPS), electrochemical impedance spectroscopy (EIS) and inductively coupled plasma-atomic emission spectroscopy (ICP-AES).

The cycle performances of LNMO/graphite cell with and without 0.5 wt% MVCTS are shown in Fig. 2. The addition of MVCTS to the electrolyte is clear to improve cycling characteristics. The capacity retention is 50% for the cell containing MVCTS after 100 cycles at 60°C, while that is 41% for the cell without MVCTS. The analogues of vinyl cyclosiloxane such as alkyl substituted cyclosiloxane and vinyl substituted disiloxanes were also investigated as additives to reveal the influence of vinyl group and cyclosiloxane skeleton of MVCTS. From the results, it was shown that only cyclosiloxane having vinyl group lead to improvement of cycle performance.

XPS, EIS and ICP-AES measurement were performed for the electrodes after cycling to make clear the mechanism of improvement of cycle performance with MVCTS. To determine the loss of active lithium ions at the anode, we measured ICP-AES of discharged anode after cycling. The loss of active lithium ions of the electrolyte containing MVCTS is lower than that of the electrolyte without additives. XPS results show that Si, Mn and Ni exist on the surface of graphite. As shown in Fig. 3, one additional Ni 2p peak appears for the anode recovered from the battery with MVCTS. These results suggest that the additives with combination of vinyl group and cyclosiloxane form suitable SEI to suppress the capacity fading by decreasing the reactivity of transition metal on top of the graphite anode surface. 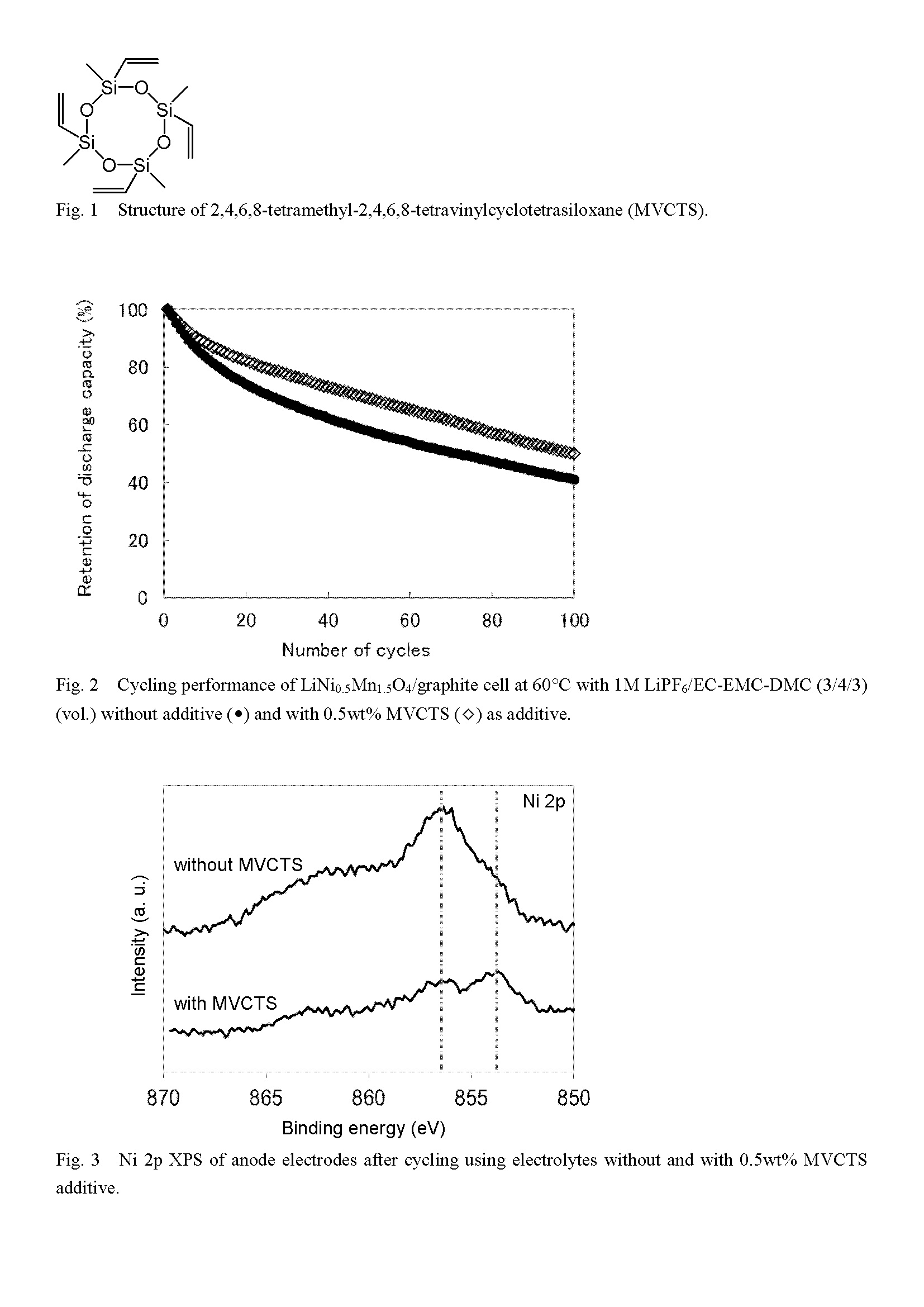