Sunrise, 2nd Floor, Star Ballroom 2 (Moon Palace Resort)
K. E. Ayers (Proton OnSite)
As the percentage of the traditional electrical grid power supplied by renewable sources such as wind and solar energy grows, energy storage solutions are required in order to maintain stable grid performance.  These solutions have to provide both generation capacity for periods of low renewable generation or peak demand, and storage capacity for peak periods such as high wind periods and mid-day with low cloud cover.  In addition, with increased renewable penetration, ancillary services such as frequency regulation to maintain grid stability increase in importance.  Specific areas of the world such as Germany and California are already requiring energy storage as part of new renewable installations based on these issues.  A recent study (Navigant Research) projects the value of energy storage for wind and solar integration worldwide to exceed $30 Billion by 2023.

Hydrogen from electrolysis is a promising technology for all of the above applications, and also provides potential linkages between other infrastructures such as transportation and manufacturing to provide flexibility in the overall solution.  Hydrogen has the capability to store massive amounts of energy in a relatively small volume, with no carbon footprint when generated from electrolysis of water.  Electrolysis can also provide ancillary services (e.g., load shifting and frequency regulation) to the grid, resulting in multiple value streams.  The hydrogen produced can be injected into the natural gas pipeline, in the production of high value chemicals such as ammonia, in upgrading of biogas, or used as a transportation fuel.

Europe in particular has been committed to these pathways and making heavy investment in both materials research and system design and development as well as technology demonstration.  In Germany, hydrogen is looked upon as a key part of the energy storage solution under “Energiewende,” their national sustainable energy transition plan.  Hydrogen provides a unique link between the electric and gas grid infrastructures (often referred to as “Power-to-Gas”).  Germany is also considered the global leader in biogas energy generation, with 18,244 GWh of generation in 2012 forecasted to grow to 28,265 GWh by 2025.

Commercial electrolysis currently consists of alkaline liquid electrolysis, based on concentrated potassium hydroxide as the electrolyte and circulating fluid, or proton exchange membrane (PEM) electrolysis, based on a solid electrolyte and deionized water as the circulating fluid.  PEM electrolysis is attractive for hydrogen generation applications because of the lack of corrosive electrolytes, small footprint, and ability to generate at high hydrogen pressure, requiring only water and an energy source.  The major market challenge for PEM competing directly with alkaline technology has been product scale.  However, that obstacle is decreasing as PEM-based products have increased in output.  Several companies have already announced development plans for commercial megawatt (MW)-scale PEM electrolysis units in the 2014-2015 timeframe and there have been recent announcements of large scale renewable energy storage projects based on electrolysis.

This presentation will provide an update on Proton OnSite’s MW product development effort, including a new large format PEM stack that achieves 40% cost reduction over the current design (Figure 1).  These reductions were achieved through research in bipolar plates and the membrane electrode assembly, and additional improvements are possible based on Proton’s ongoing projects.  Endurance and variable load testing will be presented as well as discussion of Proton’s current plans for introduction of the MW-scale product for the renewable energy storage market.  Discussion of electrolysis performance with simulated loads and frequency variation will also be discussed (Figure 2). 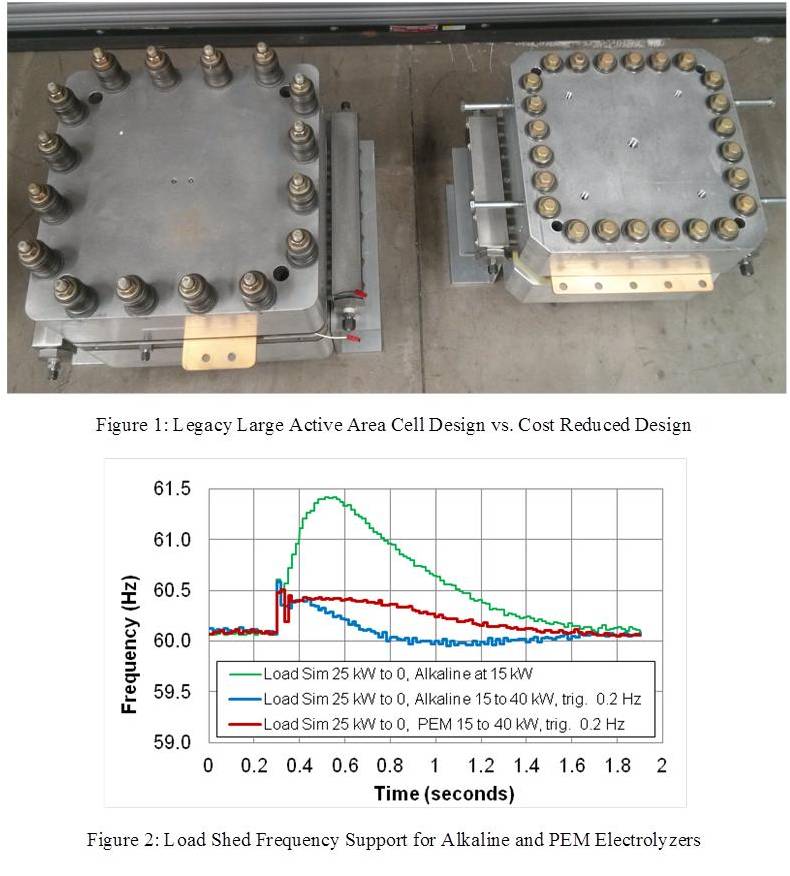