1157
Molecular Simulation of Oxygen Permeation through Ionomer in Catalyst Layer

Polymer electrolyte fuel cell (PEFC) is focused as a next-generation energy conversion system. In particular, PEFC is expected as an electrical power unit of automobile, a home electrical power supply and so on because it has high power density and high efficiency. The chemical reactions in PEFC, that is, dissociation reaction of hydrogen and water-generating reaction, occur on catalysts. In catalyst layers (CLs), there are Pt catalysts on supported carbon and ionomer films which cover the surface of those particles. Ionomer is composed of polymer electrolyte membrane (PEM), hydronium ions and water molecules. As ionomer becomes thick, proton transfer performance improves. Meanwhile, oxygen permeability decreases in cathode side. It is therefore required to find the condition in which both performances have good efficiency. These phenomena occur in microscopic structures, and it is difficult to analyze by experiments. For this reason, simulation is better than experiment for analytical approaches.

In this study, we simulated a system of CLs of the cathode side by molecular dynamics simulation. In particular, we made a system of ionomer on Pt surface, and we calculated the number of permeated oxygen molecules in the ionomer, the density distribution of oxygen in the system and so on. Using these results, we analyzed oxygen permeability in the ionomer.

We simulated the system that is ionomer on Pt surface with DREIDING force field. Perfluorosulfonic acid (PESA) membranes, including Nafion developed by DuPont, are used worldwide for PEM. In addition to Nafion, we used hydrocarbon which is low-cost alternative to PFSA membranes. Firstly, all components of ionomer are set at random in the simulation domain, and then the system reaches to equilibrium state by annealing. Secondly, Pt surface is placed in the bottom of the domain, and the equilibrium ionomer membrane is set onto the surface. After that, the system reaches to equilibrium state by annealing again. In addition to this system, the gas region for oxygen molecules is set above the ionomer on Pt surface. We considered that all the oxygen molecules dissociate on Pt surface and that the reaction occurs much faster compared with its dissolution or diffusion. In actual phenomenon, dissociated oxygen molecules react with protons and electrons, and then water molecules ejected at an instant. In this simulation, oxygen molecules can pass through the Pt surface and return to the gas region to prevent the oxygen molecules from accumulating on the Pt surface. The pressures are set at 10 MPa in the gas region and 0 MPa in the bottom of the domain, respectively. The number of oxygen molecules is adjusted to be kept these pressures so that the mass flux of oxygen gases is kept constant in ionomer.

Using this system, we sampled the number of permeated oxygen molecules in ionomer and calculated the density distribution of oxygen molecules with changing water content from 3 to 11. It is a parameter that means the ratio of the sum of water molecules and hydronium ions to the number of hydrophilic groups in side chains of the ionomer.

At the beginning, we sampled the number of permeated oxygen molecules in ionomer. It is the result that the permeability of oxygen decreases as water content increases in both Nafion-based ionomer and hydrocarbon-based ionomer.

In addition, the density distributions of oxygen molecules are shown in Fig. 1 and Fig. 2. The values decrease, as water content increases in both conditions. Moreover, the density distributions of Nafion, hydrocarbon, and water molecules in each ionomer are shown in Fig. 3 and Fig. 4. From these results, in Nafion-based ionomer, water molecules thrust into the void of the structure of Nafion in the ionomer-Pt interface, so the pathway for oxygen permeation decreases. In contrast, water molecules accumulate on hydrocarbon in ionomer-Pt interface, and they prevent oxygen molecules from permeating in hydrocarbon-based ionomer.

We have calculated the solubility of oxygen molecules in ionomer. It is associated with the appearance of the pathway, so we will research the oxygen permeability in ionomer more closely. And then we will compare the result of hydrocarbon-based ionomer with that of Nafion-based ionomer. 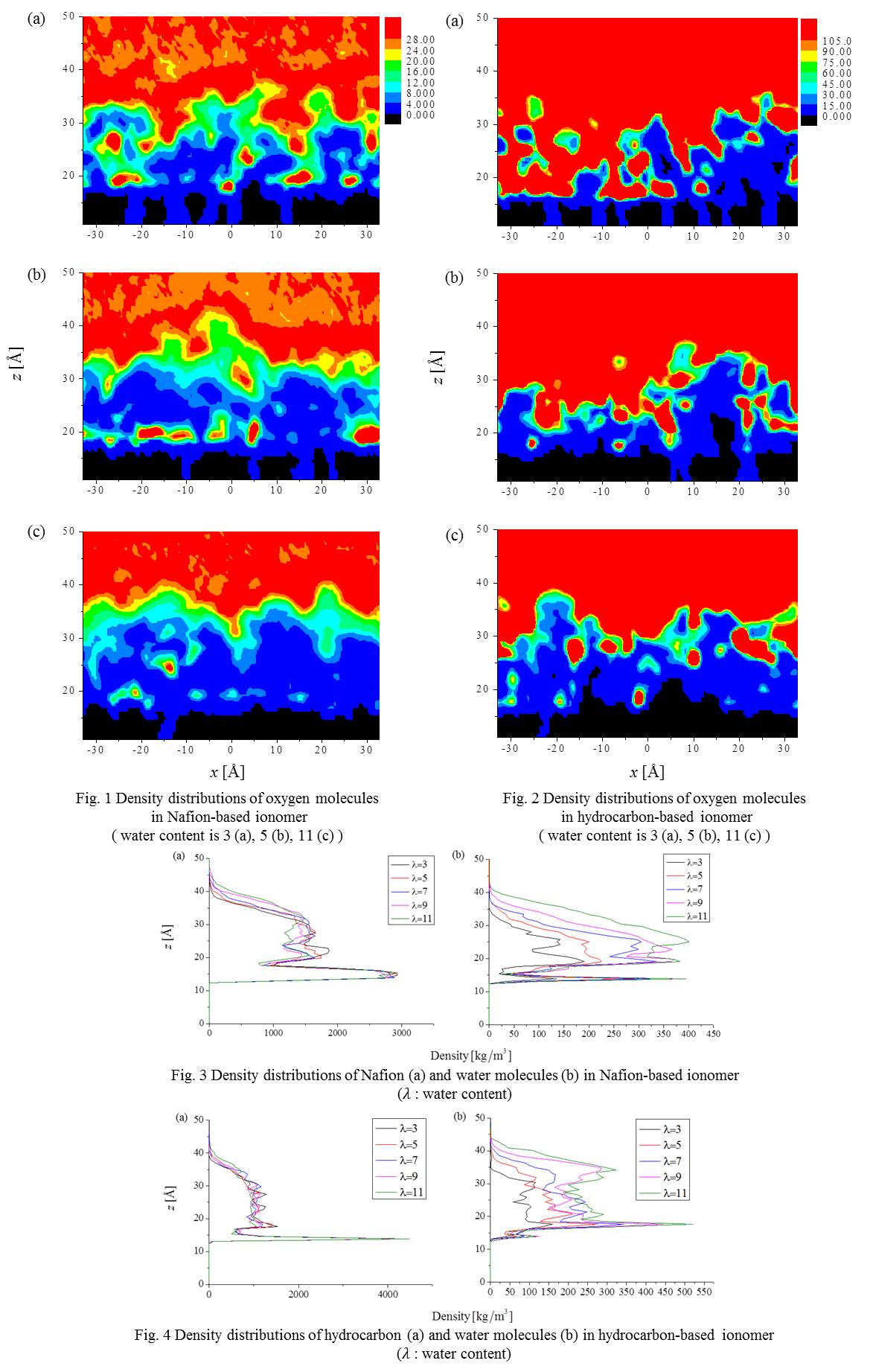