Sunrise, 2nd Floor, Galactic Ballroom 2 (Moon Palace Resort)
N. L. Wu, F. S. Li (Department of Chemical Engineering, National Taiwan University), Y. S. Wu (Department of Mechanical Engineering, China University of Science and Technology), and J. Chou (Long Time Technology Corp.)
The properties of the interface between electrode active materials and electrolyte are known to have profound effects on the performance of Li-ion batteries (LIBs). A large amount of research has so far been devoted to modifying the surfaces of active materials in order to enhance the overall performance of the electrodes. Majority of the research has resorted to inorganic oxide coatings, presumably due to their chemical stability, and different beneficial effects have been claimed for both cathode and anode materials. Relatively far less progress has been reported for polymeric coating. Compared with the inorganic ones, the polymeric coatings typically require much lower processing temperature, and when used water as solvent, can be considered as more environmentally-friendly alternative. In addition, the rich chemistry of the polymeric coating intrinsically possess a greater flexibility for dealing with wide varieties of active materials and electrolytes for maximum performance.

For LIB anodes, there are two important issues to deal with for achieving high-energy and high-power performance. First, decomposition of electrolyte at the anode surface takes place at sufficient low potential leading to the formation of a passivation film, known as solid electrolyte interphase (SEI). Formation of the SEI consumes Li ion inventory and hence reduces the overall capacity of the battery cell. Therefore, the amount of the stable SEI layer should theoretically kept at a minimum. Secondly, the power densities for the state-of-the-art graphite electrodes remain insufficient.

In this presentation, we will report our progress in developing polymeric coatings for LIB anodes, particularly for graphite and graphite/Si composite. It is demonstrated that the properties of the anodes in different aspects, such as chemical/electrochemical, mechanical, and wetting  behaviors, can be dramatically changed with the combination of polymer chemistry. In particular, it is shown that both the cycle life (Fig. 1) and even the power performance (Fig. 2) of the anodes can be remarkably enhanced by simple polymer coating. 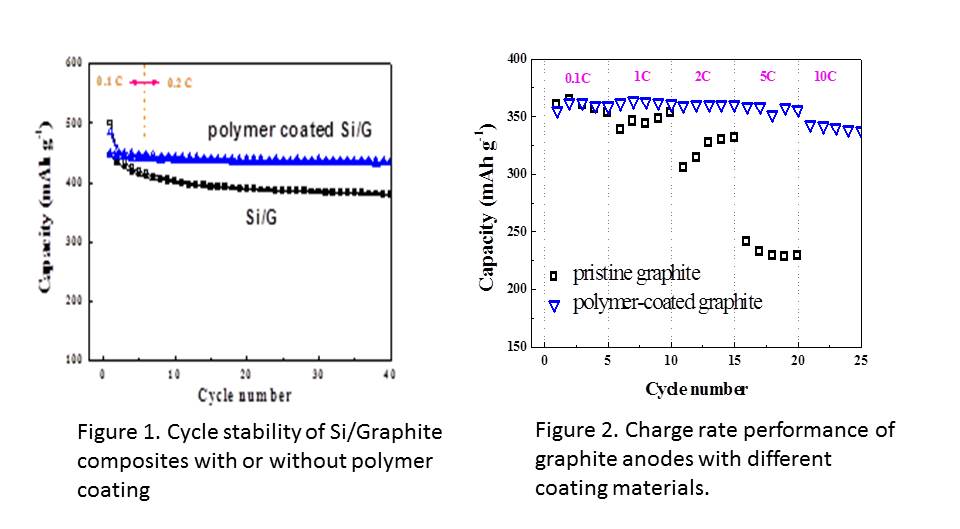