2205
Average, Local and Electronic Structures of LiMn2-XAlxO4(x=0, 0.2) in Charge-Discharge Process by Neutron and Synchrotron X-ray

As Li ion battery cathode materials, stratified formation materials such as LiCoO2 in which the Co are used mainly now. The Co-free spinel compound LiMn2O4 has been studied as Li-ion battery cathode materials. Simple composition and low cost of Mn is preferable for the battery material. However, there are the problems such as elution of the Mn with the cycle and the Jahn-Teller distortion by the Mn3+.1,2) Characteristic remarkable deterioration in this way occurs for a cycle. As solution to this problem, characteristic improvement by the substitution of the metallic element (Al, Co, Cr, Li, Mg, Ni, Ti, Zn) was reported.3)

LiMn2-xAlxO4 (x=0, 0.2) were synthesized by the solid-phase method. The samples were determined for the valence state of Mn by potentiometric titration, and also characterized by XRD and ICP measurements. Charge-discharge test was performed using the HS cell (3.5 ~ 4.3V vs Li/Li+, the negative electrode: Li metal, separator: polypropylene, electrolyte: 1M LiPF6/EC:DMC (1:2)).

At first we performed the Rietveld analysis using the neutron diffractions about each sample of Al substituted material at charge process after 2 cycles. As a result, the occupancy of Li at 8a site changed with charge discharge process, and the occupancy of Li at 16d site was constant. Thus it was thought that only the Li at 8asite participates in electrochemical insertion and extraction. In addition, distortion parameter λ in the distance calculated from each analysis showed few changes. As for the Al substituted spinel, it was suggested that the host structure was stable in  2nd cycles during charge discharge process.

We performed Rietveld analysis by the synchrotron X-ray diffraction measurement and calculated electron density in MEM and demanded a line profile of M(Mn,Al)-O. The line profile of charge discharge process of LiMn1.8Al0.2O4showed Fig. 1. It was demonstrated that the M(Mn, Al)-O bond of the Al substituted sample was more stable than unsubstituted one in charge discharge process.

We examined XANES and EXAFS. The EXAFS spectrum of LiMn2O4 and LiMn1.8Al0.2O4were shown Fig. 2. From EXAFS spectrum, the relaxation of the Jahn-Teller distortion of the Mn was suggested, because peak intensity at charge state increased. Furthermore, we examined the PDF by synchrotron X-ray total scattering. In unsubstituted sample at discharge, the decrease in peak was confirmed in comparison with before charge. It was thought that this decrease was attributed to the elution of Mn. This study reported in detail on that day. It was performed by help of NEDO (RISING) and shows thanks to the members concerned. 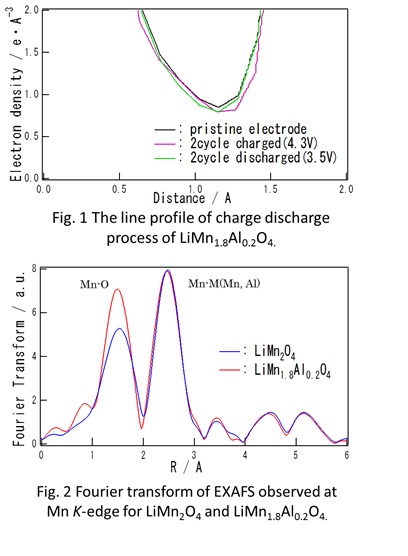