780
Passivation Magnesium in Phosphates for Its Application As Biomaterial

Expo Center, 2nd Floor, Alfa Room (Moon Palace Resort)
J. M. Ramírez Herrera, F. J. Rodrígez Gómez (UNAM, Facultad de Química, Departamento Ingeniería Metalúrgica), and G. Galicia Aguilar (Universidad Veracruzana, Instituto de Ingeniería)
Magnesium is potentially useful in biomaterial application. However, the corrosion rate of this metal is so high that its degradation occurs before the end of the healing process; for that reason, there are some researches for alloys as AZ31 and AZ91, as well as some treatments were applied to these alloys expecting a decreasing in the corrosion rate. The aim of this work is to decrease the corrosion rate and find a different material from the AZ alloys, for that reason we performed a chemical passivation of magnesium. We got this passivation through the immersion of the specimen in a phosphates solution. These passivations were evaluated with electrochemical techniques in Kokubo’s solution (SBF) and results were compared with not passivated magnesium and AZ31. Open circuit potential, EIS, polarization curves were carried out in order to evaluate passivation.

The material was chemically characterized by using atomic absorption, while the surface was analyzed before and after the techniques by Scanning Electron Microscope (SEM).

All experiments were realized at room temperature conditions (≈22°C=71.6°F); the surface of the probe was prepared with sandpaper: 240, 320, 400, 600, 1200, 1500 and finished with an alumina 0.3 m polish in order to ensure an homogeneous surface. The chemical treatment was performed at room temperature and by immersion, the samples remains in the solution for 24 hours.

Through the electrochemical techniques performed in this study, a decrease in corrosion rate was reported when the samples were passivated with the phosphates, this effect was observed in Fig. 1. This figure shows the polarization curve of magnesium, AZ31 and their passivation. The corrosion potential is different in each case, the Tafel slopes are also roughly different, these differences are important because it means that the corrosion rate was modified. This modification of the corrosion rate can be corroborated with Fig. 2 that shows a higher impedance in the case of passivation compared with the magnesium. 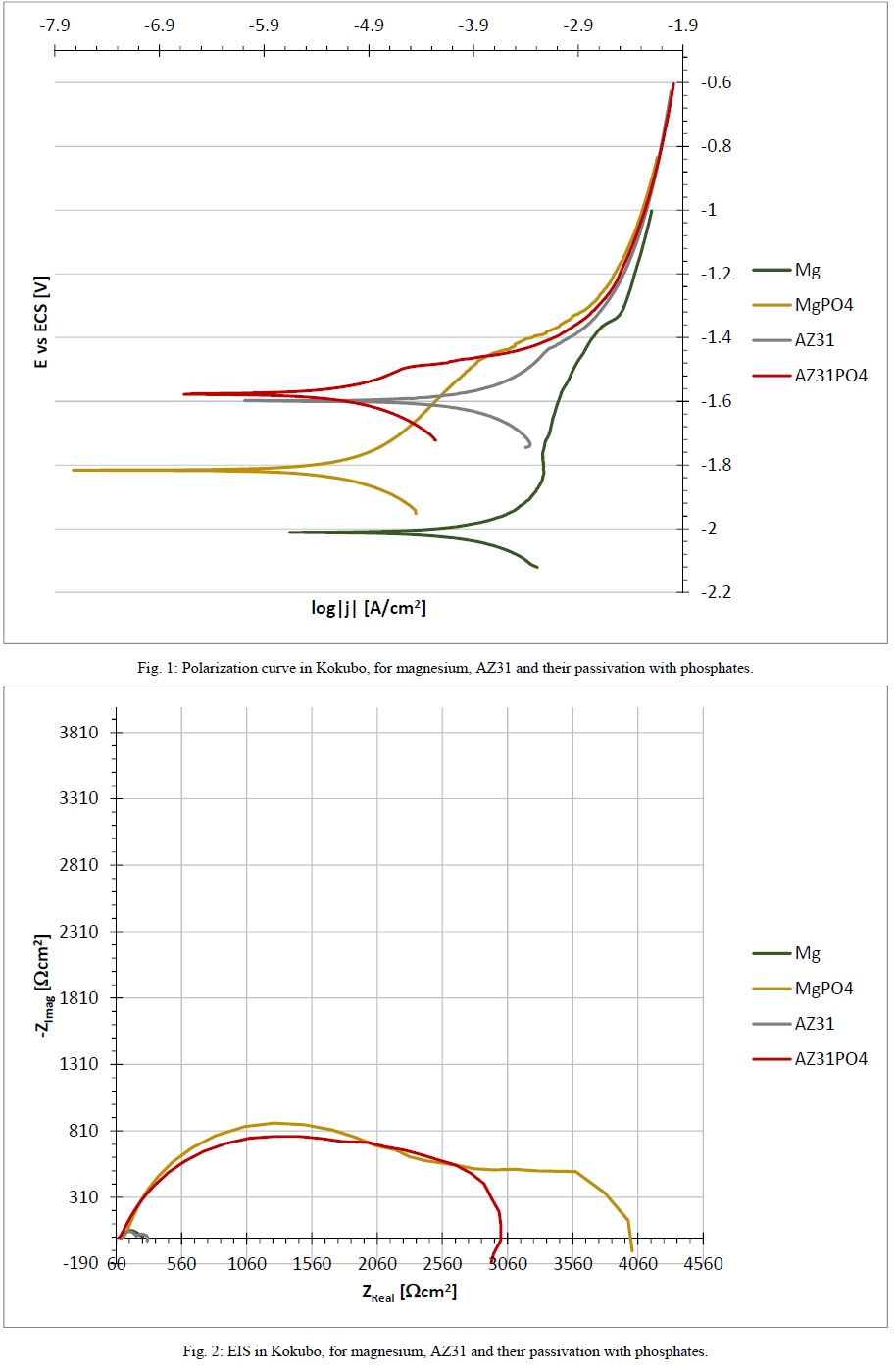