Magnesium alloys can be successfully joined by friction stir welding (FSW) to achieve high mechanical integrity of the weld. Previous work done on the corrosion performance of friction stir spot welds (FSSW) in AZ31B has shown that the local corrosion behaviour of the weld can be studied successfully by scanning reference electrode technique (SRET) and by microcapillary polarization (MCP)1,2. Both techniques identified that the weld region in AZ31B joints was more cathodic than the bulk material, resulting in the accelerated corrosion of the region adjacent to the weld. To date the majority of available literature examining the localized corrosion behaviour of FSW joints focused on similar metal welds.

The present work investigates the localized corrosion behaviour of a dissimilar metal FSW weld made between AZ31 and AZ80 magnesium alloys. The paper presents the corrosion potential distribution on the cross-sectional surface of the weld along with corrosion rates estimated by mass loss testing.

SRET experimental procedures are described elsewhere1. The reference electrode chosen for this investigation was a 10 µm diameter platinum wire encapsulated in a glass tube. The measurements were performed in 0.086 M NaCl electrolyte solution with a scanning speed of 2 µm/sec. Lines scans were performed every 250 µm.

Mass loss testing was conducted by submerging samples in 0.086M NaCl solution for a duration of 120 hours. The samples were imaged and analyzed to produce a corrosion rate.

Microstructural examination of the cross section of a stir zone in a dissimilar weld in figure 1a shows a distinct separation between the AZ31 and the AZ80 magnesium sheets. This was further confirmed by electron dispersive x-ray (EDX) mapping shown in figure 1b. The intensity of the blue color represents the concentration of aluminum in the alloy. As expected AZ80 that is composed of 8 wt. % Al as compared with 3 wt. % Al present in AZ31, shows an intense blue color on the EDX map. A well-defined boundary is observed at the interface between the two sheets. It is suggested that minimal intermixing and aluminum diffusion is occurring during the welding process. As a result the stir zone is composed of two distinct zones made from the parent metal.

Mass loss testing has shown that the weldment corroded approximately 2.5 times faster than the parent AZ31B base metal and approximately 12 times faster than the parent AZ80 alloy. The above occurs due to a galvanic couple formed between the relatively noble AZ80 and the active AZ31. Figure 1 c and d shows a representative specimen of a sample post mass loss testing. It is interesting to note that the corrosion on the bottom surface (figure 1d) occurred on the AZ31 side, a result that is expected if in fact the formed galvanic cell dominates the corrosion behaviour of the weld. The corrosion on the top surface (figure 1c) occurred on the AZ80 side, suggesting the displacement and the subsequent formation of a thin layer of AZ31 the entire stir zone on the top surface.

Successful butt welding of AZ31/AZ80 has shown a sharp gradient in aluminum concentration across the stir zone. Minimal mixing and diffusion of aluminum is observed at the interface between the two metal sheets. Further work examines the corrosion performance of these welds through corrosion potential mapping using SRET. 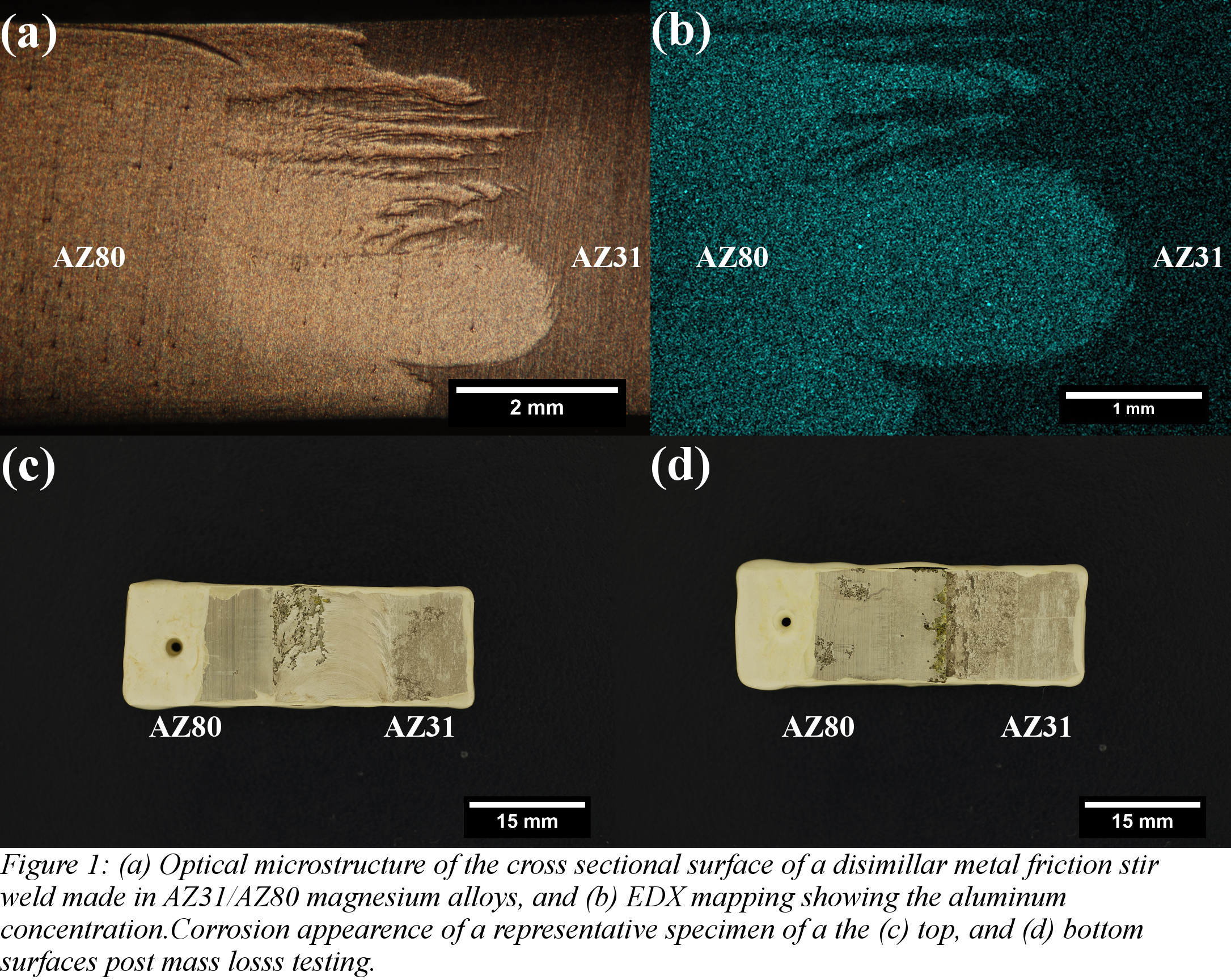